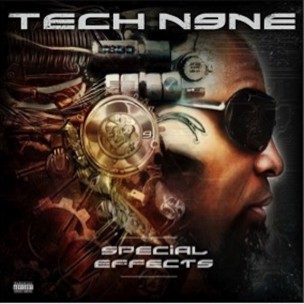 Nearly two weeks before Tech N9ne releases his fifteenth album Special Effects, he lets loose the highly anticipated sequel to fan favorite “Worldwide Choppers.” Reducing the number of cast members by making things a three-way lyrical sparring match between he, Krizz Kaliko and Eminem, “Speedom (WWC2)” is pure adrenaline. Despite the level of epic-ness at hand, does it reach it’s destination or crash and burn?

In This Threeway Rap Tug-O-War Who Came Out The Victor?

Ural: Sure, there are particular fan favorites in Tech N9ne’s legendary catalogue ranging from Absolute Power and Killer to Everready. However, his most important is arguably All 6’s and 7’s for a variety of reasons. Obviously, the album featured a slew of guest verses from the hottest rappers of that time including B.O.B, Lil Wayne, Snoop Dogg, E-40, Yelawolf and Busta Rhymes among others. Before elevating higher to his biggest selling album to date, Something Else, All 6’s and 7’s proved for the first time Tech N9ne was able to bring marquee major label Hip Hop artists into his strange world without compromising. There wasn’t a better example than the original “Worldwide Choppers” featuring Ceza, JL of B. Hood, Yelawolf, Twista, Busta Rhymes, D-Loc and Twisted Insane. Throughout Seven’s 5:26 production, everyone involved delivered the soundtrack to an apocalyptic showdown.

Special Effects’ sequel “Speedom (WWC2)” is condensed to three and manages to be even more explosive. That’s probably due to the king Technician recruiting Krizz Kaliko and the “Rap God” himself Eminem. Tech kicks things off before passing the torch to Kaliko and Em before killing the homestretch. At this point, Seven is just as important to “WWC” as Tech thanks to the high octane rock that has the perfect level of bounce; allowing all involved to just talk their shit in the fastest way possible. If Kaliko plays a perfect middle ground game, Em spits with his trademark sniper’s eye precision while Tech is the rocketlauncher of pure madness. Not only does “Speedom (WWC2)” match its predecessor but eclipses with far less involved.  For some reason, considering the competition he was against, Kaliko’s verse felt the best as he seemed to ride the beat a little bit better than both Tech and Em.

Andre: Tecca Nina always, always, always comes with the high tempo flow over beats to match, but it’s often difficult for emcees to keep up with the Strange Music head honcho. Of course, he’s brought the proper reinforcements, Krizz Kaliko and the “Rap God” himself, Eminem. Both feature verses are fairly standout, for sure, but the two vets Tech and Eminem steal the show. WWC2 is, perhaps, a cousin to 6’s and 7’s “Worldwide Choppers,” Tech’s best selling album to date. And this song is another worthy addition to the Tech pantheon, seemingly pushing the other emcees to creative and technical peaks.

Steel sharpens steel, in that way, and while none of the verses are calling anyone out in a super-competitive way a la Kendrick Lamar in “Control,” Eminem does deliver tongue in cheek verses like “I’m a nemesis to a feminist,” and then, “Envious of female independence, hell with a clitoris, hit or miss you / Never consider this a bit of disappointment, I’ll never fail to deliver this.” And he doesn’t. All this while rapping furiously, syllable comically and precisely falling over syllable like a young Jim Carrey as his flow reaches a fever pitch. You could even say he over-raps, as he won’t do, making sure the verse is crushed mercilessly and completely. But Tech is not outshined, not at all. In fact, his verse stands up despite him being first in line with raging bars  And neither is Krizz Kaliko, whose straight forward flow holds up well sandwiched between the two juggernauts. All in all, Tech probably inches ‘Em out in pure speed rapping, but that’s just me. Either way it’s a toss up.