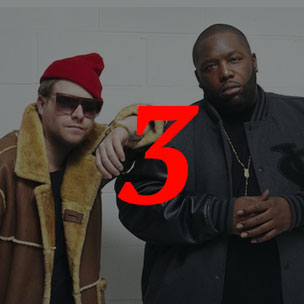 3 For 3: 9 Artists Who Crafted A Triad Of Fantastic Albums In A Row

It’s a complicated measure. The trifecta they call it or the menage´or the three-peat. Three is special and odd. It’s a prime in a room full of squares or boiled downs. And what’s more difficult? The creation of three great things in a row. One and you may have gotten lucky; two and you’re really talented, but three? They carve your face somewhere after that and the fall from grace, while still brutal, is less so knowing you created a trinity, holy or not.

It’s so rarely ever done — the album three-peat — that you have to sit and ponder for a while and ask yourself if anyone’s really ever done it at all? But their have been times when through sheer force of will someone or a group has shot through past two and split their dead-eye arrow in half, right down the middle. We present only nine of them here, but here are our picks for artists who managed to pull off the album hat-trick.

R.A.P was Killer Mike’s sixth studio album. Mike’s chronically undervalued 2011 project Pl3dge (the third project in The Pledge series) saw Mike at, maybe, his most militant. In an interview with HipHopDX he even went this far: “Yeah, I got concerns that they’re gonna kill me. I’ve got concerns that unless enough people wake up and pay attention to what I’m saying, either I’m going to have to stop saying it or I’m going to get killed for saying it—one or the other.”

Pl3dge was political. It was controversial and it was polysonic. FlyLo is in the credits for Gods sake. But it would be his partnership with the sci-fi tongued, aggressive cult producer El-P that would take both of their visions and form Hip Hop’s two-pronged Voltron. As R.A.P became the phenomenon that it was, placing Mike’s internal struggles against a backdrop of comic book musings and rage, the two looked at each other and knew a good thing when they saw it. They teamed up and Run The Jewels came next, and three classic recordings later, the renaissance of both artists seems complete. What’s next? Run The Jewels 3, of course, and the melting of even more faces to follow.

Sometimes an accident will change your life. It did so for one Kanye West, who went from being the ill-tempered “My life is dope and I do dope shit” Roc-a-Fella producer to the hard charging futurist with the earnest flow. That accident also changed his cadence, allowing him to bend words to fit in that Chi-town drawl that’s entrenched us to his sound. It’s taken dramatic turns with each iteration, as a whole new Kanye seems to rise out of his soul for each album. The College Dropout was a sort of Native Tongues revival-cum-comedy routine over soaring, immaculate production that included “Jesus Walks” and “All Falls Down.” The second was more commercial, as Late Registration shifted with his sudden fame (one he never doubted for a moment) as “Gold Digger,” and “Diamonds” flooded your streets, your hallways, and synapses. Graduation was the culmination of pre 808s Kanye, where he molded Electronic influences with anime (“Stronger”), trap (“Can’t Tell Me Nothing”) and sheer genius. Then his entire life changed in an instant and 808s and Heartbreak would go on to define an entire genre. But the first three Ye´records stand as a timestamp, and a clarion call to what Rap would become.

Albums: Radio,  Bigger And Deffer, Walk With A Panther

Everyone knows Radio changed Rap forever, ushering in a kind of popularity the genre had yet to see up to that point. “I Can’t Live Without My Radio,” “Rock The Bells” and the “I Need A Beat (remix)” are ubiquitous classics, and sound as fresh now as they did 30 years ago. Then Bigger And Deffer came along to change things again. The bravado was there in “I’m Bad” and “Get Down” but so was something for the ladies in “I Need Love.” That song changed, well, everything, and that formula has been relaid and remolded countless times since. Walk With A Panther would follow, and it would be controversial for what seemed like its tone deaf one man parade to have the good times continue. But, with the pleasure of time, we can see it for what it truly is: a slick, finger licking good time amidst a spiders web of social upheaval. “Going Back To Cali,” “Big Ole Butt” and “Jingling Baby” still makes every party complete. And although it wasn’t as appreciated as it should have been then, we can now admit the truth: Walk With A Panther was a great commercial record.

It would be their penultimate farewell, duel solo records masquerading as a double-disc that would get them their Grammy. But we all know better. The Organized Noize produced super-duo featured the brash machinations of Big Boi with the understated artistry of Andre Benjamin for five incredible runs at the throat of Rap. We can only choose three, and while Southernplayalisticadillacmuzik was incredible, 3000 had yet to find the polish that would push him into G.O.A.T considerations for years to come. It’s safe to say he began to awaken on ATLiens as Big Boi continued his multi-syllabic, multi-cadence assault on Hip Hop. Then, a complete and utter shift in sound came along in the form of Aquemini. It was something, literally, that you had never heard before. That you needed to hear, and that you wondered why you’d never heard before. Such was the genius of ‘Kast. It was the iPhone of it’s moment, and featured jams that literally shoved the genre forward. Then Stankonia, an equally different, equally transcendent record featuring songs like “B.O.B” and “So Fresh, So Clean” it was a 24 song thrill ride. A jagged feature film in musical form. That would be close to the beginning of the end for this dynamic duo. But, God, what a run.

There wasn’t a female alive that dared to sonically change the landscape of Hip Hop until Missy Elliott hit the scene with Supa Dupa Fly. Before Nicki, Drake and the hundreds of other singers/rappers began blurring genre lines, Misdemeanor could give slick rhymes on tracks like “The Rain (Supa Dupa Fly)” then belt vulnerability with “Beep Me 911.”  As the Virginia-native utilized Timbaland’s spaced-out funk to set the standard for how MCs approach his unique production, she continued to push the super-producer into her sophomore album Da Real World. The beats got darker and features more unique; that includes what’s technically Beyonce’s first solo rap feature. Taking a left turn, Miss E… So Addictive essentially introduced early EDM elements that obviously still resonate throughout Hip-Hop today. Don’t believe it? Take a listen to “Scream A.K.A. Itchin” or “Get Ur Freak On.”

The debut from Q-Tip, Phife Dawg and Ali Shaheed Muhammad forever stands as a landmark album in “Golden Era” Hip Hop. There was a jazz like cool that lent itself well to now classic tracks ranging from “Bonita Applebum” to “Can I Kick It.” Their follow-up, The Low End Theory, eventually set the blueprint for alternative Rap of the early to mid-90s. For those who thought the three(technically four counting Jarobi) were soft backpackers, “Show Business” and “Scanerio” were nice kicks to the jaw. However, Midnight Marauders turned A Tribe Called Quest not only into music’s best but featured one of the most epic album covers of its era.

Dr. Dre took a chance on a lanky white boy from the Detroit trailer parks with a storied history in the local area battle rap scene. The end result were three groundbreaking albums from one of the greatest MCs in HIp-Hop history. The Slim Shady LP was a striking debut that reached into the psychotic mind of Aftermath Record’s first star. Who else could be bold enough to call out his own boss on “Guilty Conscious?” More of a personal affair, The Marshall Mathers LP became one of the highest selling records of all time. Eminem eventually fused both concepts of himself and his Slim Shady persona to perfection for The Eminem Show. If he not challenging “White America,” or giving insight into his childhood through “Cleanin’ Out My Closet,” he’s giving that classic dark humor on “Without Me” and “Drips.”

Three white kids from Brooklyn changed Rap forever with Hip Hop’s forever with Licensed to Ill.  For heaven sakes, that album alone delivered seven of the highest charting rap tracks of the 80s. Most importantly, The Beastie Boys established a set of rules on how to make good Hip Hop without the sleazy feeling of cultural appropriation. “Paul Revere,” “Brass Monkey,” and “No Sleep Till Brookyln” all easily stood on their own. Leaving Def Jam and moving to Capitol Records, Mike D, MCA and Ad-Rock utilized the Dust Brother’s unique production for the even better Paul’s Boutique. Their third studio album Check Your Head is to this day considered one of the best rock/Hip-Hop fusion hybrids.

Albums: Resurrection, One Day It’ll All Make Sense, Like Water For Chocolate

Chicago’s legendary purveyor of conscious rap became a household name after the “I Used To Love H.E.R.” featured Resurrection. Follow-up  One Day It’ll All Make Sense was a last hurrah for Common and No I.D. as the two wouldn’t work for years exclusively. However, Like Water For Chocolate became a breakout moment for the Mr. Lonnie Lynn Jr. commercially as well as critically. That could be due in part to the standout production from J Dilla which gave Common his first big hit “The Light.”