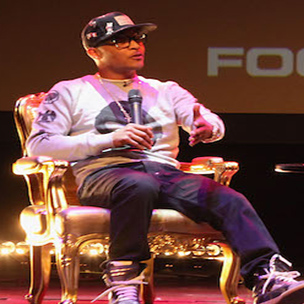 5 Things We Learned From T.I.s CRWN Interview With Elliott Wilson

With the very recent release of Paperwork, including the success of his three singles “About The Money,” “No Mediocre” (featuring his controversial protégé Iggy Azalea), and “National Anthem,” T.I.’s name is one that has surely been on many people’s minds and playlists as of late. The self-proclaimed “King of the South” has been unleashing music to the public for nearly a decade and a half now, and between music industry life and dabbling in the streets and dealing with the consequences of that, he’s a man of many stories.

Looking to tap into these memories, music journalist and RapRadar founder Elliot Wilson sat down with T.I. this past Tuesday at New York City’s Gramercy Theatre as part of his CRWN live interview series held in conjunction with Watchloud and Footaction. HipHopDX was present for the discussion, which touched upon his prison stints, getting released from a label, how he almost gave up on acting, and more. Below, we compiled a few of the highlights of their conversation including recording in a beauty salon and rap being too “electronic.” All quotes taken directly from T.I.

What’s wrong with the Hip Hop climate these days? According to T.I., it has strayed from its roots and become too electronic, too easy for anyone to get involved, and he wants to bring back its foundations.

“It’s too electronic right now…Don’t get me wrong, I appreciate all art forms and music, all creations. Everything that people put their blood, sweat, and tears, their heart and soul into, I salute and appreciate it. But as far as the way I came up? The art form that I grew to love? It has gotten way too electronic now, and it’s too easy to make beats and say, “Here, I’m a producer,” you know what I’m saying? I felt like, you know, we’re gonna get the instrumentation. Bring the music back. Try to infuse the way it used to be done with the way that it will be done tomorrow. The way UGK did with Ridin Dirty.  The way Jay did with Blueprint. The way Snoop did with Doggystyle.”

T.I. Says Pharrell Is Always The First To Reach Out After A Prison Stint

The Pharrell-assisted track that never made it to Trouble Man: Heavy Is the Head, “Hear Ye, Hear Ye” was the first record he made post-prison release.

“I did “Hear Ye, Hear Ye” in the halfway house. That was the very first record that I recorded…it was that, and then the one that I did with K.R.I.T., “I’m Flexin”. Those are the first two records I did when I came home, but Pharrell’s record? Pharrell’s was the first beat CD that I got, and it seemed like every time I came home from prison Pharrell was the first person that I’d see. He’s always showing up as soon as I come home! Like, “let’s get to work”. Ever since, he just consistently and very genuinely, week in and week out, was calling checking like, “How’s the music coming? What are you thinking? What are your plans?” I was like man, he’s the one that’s most consistent and genuine with his support, and that’s Hustle Gang shit. That’s what we do.”

T.I. had fans laughing when he joked that he didn’t know who at LaFace Records would be hitting him up to buy drugs. A well-timed page may have been the motivating force that got T.I. out of the streets and into the music business.

“I was riding my bike at about nine in the morning, selling crack, and I get a page. The page was a number I didn’t recognize – and this was back in the day – so I rode my bike to the pay phone, because I never answered my pages from my house number. So I called and they said, ‘this is LaFace Records.’  I’m like, somebody paged me from up there? Who’s smoking crack up at LaFace?’ [Kawan “KP” Prather] picked up the phone and said “a group of us is going out to L.A. for the Source Awards…me, Outkast, Goodie Mob, Youngbloodz, and we just wanted to see if you wanted to go.” What?! Me? I’m ready now! I’m on the corner of Bankhead and South Grand! So long story short, after that I re-upped that one last time, paid everybody I owed, got me enough money to get myself fresh enough to be presentable to go out there, and the rest of it I gave away. I ain’t sell no crack no more.”

T.I. Says “Rubberband Man” Was Recorded In A Beauty Salon

“Rubberband Man” Was Recorded At A Beauty Salon. And T.I.’s wife, Tameka “Tiny” Harris’ old basement, was the recording location for some of Trap Muzik.

“My partner Matt’s mom let us record at her beauty salon when they weren’t there. She let us rent out the “after hours.” Like, “Rubberband Man”. Absolutely. That was also the time when I met Tameka and then I started recording in her house. I was just a little vagrant, what do you call it? Like “Lady and the Tramp,” I was the tramp. I’d come late, eat some spaghetti, and record me a couple songs. Then she’d be like “alright now, bout time to go.” Like damn, you always makin’ a nigga leave and shit, you need to let me spend the night one night! “Nah nigga, it’s time to go!” I was like, you gon’ love me one day! Some of the songs from Trap Muzik were recorded in her basement as well. “

The FED’s Raided T.I.’s House After The “Rubberband Man” Video

As the video shoot was shutting down, he got a call from his neighbor telling him not to go home. T.I. jokes in retrospect about the situation.

“On the very night that we were shooting the video for “Rubberband Man”… I’m talking about no sooner than I had said goodbye to Puff, slapped hands, and was on my way, my neighbor was calling me saying, “Don’t come home. You got helicopters, SWAT team, everybody surrounding your house, kicking in your doors. Do NOT come here!” And so then shortly thereafter I had a little ‘sit down,’ so I didn’t even get a chance to really see all the products of “Rubberband Man”. I just dealt with it. That was really because I wouldn’t tell on somebody. One of my partners was big in what he was doing, wasn’t no secret about it, and it kind of trickled down to me. A picture of he and I, with ‘other things,’ and whispers here and there… Basically they busted in my house. They found a gun. I was on probation. They took me in and said they’d tell my probation officer about it if I didn’t tell them something about it… When I wouldn’t talk, they told my P.O. and then I had to go sit down. I beat the gun charge because my security at the time, he had left the gun at my house. We told them, you know, that he had left the gun at my house.”