Goodie Mob - Age Against The Machine 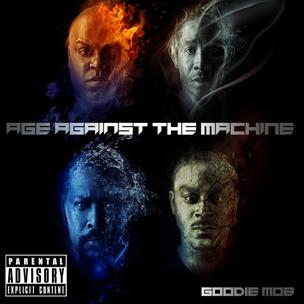 The last time we heard a proper studio album from Goodie Mob with the full group roster in tact was 1999’s World Party. That disjointed affair found the Atlanta collective going in opposite directions, with the seemingly disparate goals of increased visibility and catering to a fan base built with two stellar albums. In the 14 years since, Cee Lo has used Gnarls Barkley, a residency in Las Vegas, a stint on NBC’s “The Voice” and his gregarious personality as a vehicle for his eclectic tastes. T-Mo and Khujo were rechristened as The Lumberjacks, Gipp—true to his mutant moniker—popped up when and wherever he felt like it, and the less we say about 2004’s One Monkey Don’t Stop No Show the better. So where does that leave the Goodie Mob in 2013? Surprisingly, the quartet has adapted to the various changes in the industry quite well.

Organized Noize served as the unofficial fifth group members on both Soul Food and Still Standing. Fans looking for similarly produced material would do well to keep in mind that all of Cee Lo’s solo offerings have largely self-contained affairs. The lush, yet minimalist Organized Noize soundscapes have been replaced with the type of Parliament Funkadelic-inspired, Electro Funk more prominent on OutKast’s Spakerboxxx/The Love Below or the 2001 Dungeon Family compilation, Even In Darkness. While the BPM’s have been turned up, the message is still the same. It makes for an initially jarring listen that risks alienating those looking for a 2013 Soul Food, but it will stand alone as a quality album.

When Cee Lo rhymes, “I’d rather die than to not be distinguished,” on “Special Education,” it essentially serves as a mantra for the album. Despite all the futuristic synths and dissonance, the message remains the same. Race, sex, the group’s overall take on the music industry (“State Of The Art”) and especially how Goodie Mob view themselves in relation to these elements (“Pinstripes”) are all addressed in a frank but stylish manner. Most listeners will quickly forget Cee Lo was on a network television stroking a white cat named Purrfect by the time “Nexperience” rolls around and he unleashes the following diatribe:

There are times where it feels as if the group is being eclectic just for the sake of it, but the jagged demeanor of Khujo and T-Mo balance out tracks such as the Disco-flavored “Ghost Of Gloria Goodchild” and the artfully twangy, “Southern Girl.” Big Rube opens the album, and Kawan Prather of Parental Advisory fame co-produced “Kolors.” Some additional Dungeon Family cameos would have been great—if for no other reason than nostalgias sake—but T.I., Janelle Monae and a cadre of producers such as YoungFyre, Caviar and The Grey Area avail themselves well.

Ultimately, the top moments on Age Against The Machine find Goodie Mob striking a perfect balance between how we remember them at their best and where they hope to take us, with the poignantly understated “Kolors” serving as the best example. Female listeners hoping for a return to “Beautiful Skin” may very well be turned off by the side-piece anthem, “Understanding.” While the candor is refreshing, and Floyd the Locsmif provides a soulful backdrop, it’s probably hard to get behind a track featuring Cee Lo rhyming, “There goes that smile, I know you tough / Plus I got a hoe underneath you to hold you up.”

It’s nearly impossible to expect a group to be capable or interested in an exact replica of material they made almost 20 years ago. And sometimes things lean far on the outlandish side when Cee Lo is left to his own devices. But for those willing to experiment, Age Against The Machine serves as both a piece of art and a rewarding risk in an age where established artists are fearfully playing it safe.