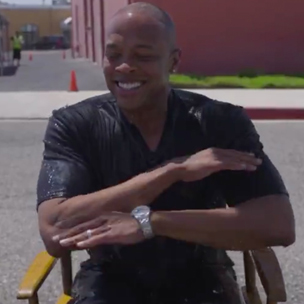 By now, you’ve probably seen Dr. Dre, Drake and Game among the many celebrities dumping containers of ice on their heads as part of “The ALS Ice Bucket Challenge.” You’ve also likely seen this become a trending topic, as #ALSIceBucketChallenge has become a viral sensation on social media platforms.

But, while the hype appears to be surrounding the notable figures who’ve had ice dumped on them, the spotlight is actually on former Boston College baseball player Pete Frates.

On July 30, Frates, who suffers from ALS [amyotrophic lateral sclerosis] and is unable to speak, posted a video on Facebook featuring Vanilla Ice’s “Ice Ice Baby” playing in the background. His goal? To challenge others to do what he can’t, to dump buckets of ice on their heads.

“Ice water and ALS are a bad mix,” he says in the post’s caption. The Vanilla Ice cut kicked this trend off properly. Before long, thanks in large part to Frates, this challenge was everywhere, raising awareness for ALS.

The Centers for Disease Control and Prevention defines ALS, which is often referred to as Lou Gherig’s disease, as “a progressive disease that attacks the nerve cells that control voluntary movement.” Researchers have not found a cause for ALS,  and there is no cure for the disease, so raising awareness and funds for research is vital. The #ALSIceBucketChallenge is meant to do both.

Those who participate must dump ice on their heads. They then must challenge others to do the same within 24 hours. If a person doesn’t follow through and face the challenge, they are to donate $100 to ALS. Many do this, but others do both.

So, how effective have the bucket efforts been?

Since Frates’ video was uploaded, the ALS Association says it has received more than $13.3 million in donations. To compare, the association says it received $1.7 million during the same period last year, according to The Times. That’s as of Sunday. Since then, even more celebrities have joined these efforts, which likely means greater awareness and more money.

As the trend continues to grow, we thought it’d be a good time to compile a list of different Rap figures and R&B singers who’ve participated in this challenge in an effort to help raise even more awareness.

Iggy Azalea‘s appeal has skyrocketed this year, likely in large part thanks to Clear Channel’s “On The Verge” program. So, having Iggy as a part of these awareness efforts could prove fruitful. Here’s Iggy accepting a challenge handed down by J. Lo, as the “Fancy” emcee rocks a skimpy bikini to face the icy downpour.

Jennifer Lopez, who nominated Iggy to participate in the challenge, wasn’t afraid of facing the ice herself. “Jenny From The Block,” who recently beat out Diddy to acquire Fuse TV, took her ice bucket challenge while sporting workout gear, a little bit more covered up than the outfit she sported on her “Booty” cover art.

Game, who once rapped about having ice on his neck despite never being injured, literally had ice on his neck with this challenge. Game accepted the challenge and also re-grammed the ice dump from his “Pot of Gold” and “Celebration” collaborator, Chris Brown.

Omarion, one of the lead stars in the upcoming season of Love & Hip Hop: Hollywood, was a participant in the ice bucket challenge. In his video, Omarion nominated Khloe Kardashian, among others.

Drake is touring with Lil Wayne, but the two are really battling on their run with Drake Vs. Lil Wayne. So, when Weezy nominated Dreezy for the ice bucket challenge, it was almost as if Drake had no choice. Drake upped the ante by doing his bucket challenge on stage during their tour.

Swizz Beatz kept his ice bucket challenge in the family. The producer, who recently revealed upcoming Nas collaborations, dropped ice on his head while sitting next to his son. Swizz, who is expecting his second child with Alicia Keys, nominated T.I., Diddy and Carmelo Anthony, among others.

Wiz Khalifa kept his cool with ice falling all around him. The emcee, who recently released his Blacc Hollywood album, did a good job of remaining unfazed by the coldness falling upon him.

Tim Cook, the CEO of Apple Inc., challenged Dr. Dre to dump ice on his head. Dre didn’t slip on this challenge, otherwise, he would have been slippin’, so he sat down and allowed the ice to rain on him.