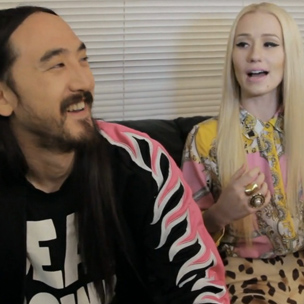 Whether completely hating the move or willing to accept it as logical progression, EDM’s occupation of Rap music is a reality whose demise is like not coming anytime soon. The relationship reached new heights as mainstream popular emcee A$AP Rocky’s hotly-anticipated new material was far less about “boom bap” and more about “oontz oontz.” He paired with Kanye West-favored French techno artist Gesaffelstein for “In Distress,” and with trap-as-EDM favorite Baauer (of “Harlem Shake” fame) for “Riot Rave.” Paired with rapping over Skrillex and Birdy Nam Nam production collaboration “Wild for the Night” on 2013 album Long.Live.A$AP, it would appear as though Rocky (alongside the likes of fellow Skrillex collaborator Chance the Rapper, and EDM devotee Angel Haze) has become the go-to name as Rap acquaints itself with a new (yet possibly strange) bedfellow. However, this story having long-term potential will likely be about a whole lot more than the success of A$AP Rocky. There are a few other names that, given their style and aesthetic, are actually a far better fit for Rap as it veers down this most unique of lanes. While there are likely many who will attempt, these are the five that more-than-likely will, could, and ideally should be allowed to prosper in this divergent (yet mainstream) lane in a major way.

It’s frankly amazing that DJ wizard A-Trak’s recently announced Low Pros production tandem with Lex Luger kicked off with Travi$ Scott song “100 Bottles,” and didn’t kick off with Waka Flocka screaming on the track about going “Hard in the Paint” (again). There’s a progression insofar as EDM accepting Rap’s influence that involves Luger’s production from Flockaveli, for Waka being at that moment one of the hardest-hitting records (of any genre) in the world, and thus being in constant rotation at dance clubs and festivals worldwide. Waka’s distressed screams, unique cadence and incomparable flow on “Hard in the Paint” definitely added to the song’s most beloved outlier status in EDM—as well as likely making him one of pop-dance culture’s most widely appreciated vocalists. With a dance-based album forthcoming in 2014, the question is when and not if the records that will truly signify what one style of dominance of Rap in EDM’s lane will see the light of day. Though other Southern emcees will try (i.e. Casino on Flosstradamus’ “Mosh Pit”), this entire wave would likely not exist (or at least not be as popular) without Waka, thus making him the king.

If a fan of dance and Rap commingling, Australian-born emcee Iggy Azalea’s 2013 signing to Island was a moment accompanied by much joy and excitement. As much as mainstream dance is all about bass drops and bro rage, there’s as many or more young women in those crowds who ideally need a heroine. Yes, A$AP is excelling, but there’s definitely space for someone else. Nicki Minaj has played this role prior, but the second that “Starships” hit Hot 97 and Peter Rosenberg gave it the gas face, it was obvious that a more organic-to-Rap, yet still very much of EDM attempt was needed to facilitate crossover success. If Iggy’s just-released single “Fancy” (featuring vocalist of Icona Pop’s “I Love It” fame, Charli XCX) is any indication, there’s a solid blend of sassy lyricism, sex appeal and now-popular in EDM “twerk” beats (speed trap up to 100 BPM) to create a solid crossover.

There may be nobody turning up harder (save A$AP Ferg) at a live Rap event right now than Top Dawg Entertainment’s ScHoolboy Q. “Man of the Year” joins “Hands on the Wheel” as the kind of rambunctious, live, Rap-along experience that could just as easily cause someone to lose an eye or break a leg. Ever seen a bunch of people listening to dubstep, moombahton or especially trap at your favorite dance club these days? The exact same thing is happening. If someone were to combine these combustible elements and stand as far back as humanly possible, they may still get damaged by the energy from that track’s explosive potential in a party environment.

Having already released their well-respected, self-titled album on Rap/dance line-tower of a label Fool’s Gold Records, El-P and Killer Mike are in an ideal position to make magic happen. There is a history hearkening back to MF DOOM’s oddly successful pairing with Danger Mouse [2005’s The Mouse and the Mask] of lyrically adept rappers with an established underground dominance being able to have crossover appeal in dance. In these emcees bringing their legitimacy and credibility to the party, that “real Hip Hop” energy gives oftentimes-ersatz dance a polar-opposite feel. I could imagine in the sustainable corners of dance—perpetually Rap-friendly genres like garage, grime and drum and bass—providing a bountiful creative space with significant earning potential.

If unaware, America (especially Los Angeles and New York) is again quietly becoming a locale targeted for pop-crossover domination by globally pop-dominant Korean pop (K-pop) music. YG Entertainment artist (and BIGBANG member) G-Dragon has been featured on Complex and Hypebeast, and his 2013 Rap single (from an eponymously titled album) “Coup D’Etat” was produced by Americans Diplo and Baauer. As well, YG Entertainment is home to 2NE1 member CL, whose single “The Baddest Female” features rhyming that, while similar to G-Dragon is largely in Korean. She (alongside G-Dragon), is featured on Skrillex’s recently-released album on the track “Dirty Vibe.” K-pop blends American pop tropes (especially those of the urban variety) with so many things that Americans stereotypically love about foreigners (especially Asian) that if the EDM-friendly productions of K-pop are given an honest shot in the American pop atmosphere (which is largely influenced by Rap) a disrupting one-hit wonder (similar to another YG artist, Psy, of “Gangnam Style” fame) is entirely possible.