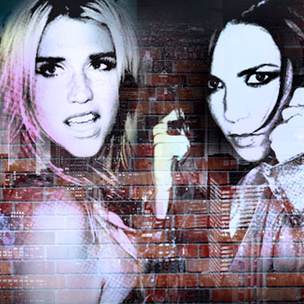 Do not adjust your monitors. I’m white. Yup, that’s right; I’m a white girl – raised in between the suburbs of Hawthorne, New Jersey and the inner city streets of Paterson, New Jersey. That same combination (Hawthorne and Paterson) groomed Hip Hop’s original favorite white girl, Debbie Harry, of Disco-Pop legends Blondie. That makes me the greatest authority to discuss a favored trend in Hip Hop: The White Girl.

Hip Hop always has a favorite white girl. It’s true. From Debbie Harry’s reign in the ‘80s, to the late Teena Marie in the ‘90s, and the new millennium having a pale princess conglomerate ranging from Gwen Stefani to P!nk to Esthero back around to Britney Spears. Then, of course, there’s Madonna who fits in anywhere she wants and Amy Winehouse who had every opportunity to fit in but didn’t want to.

What is it about white girls that make them more readily acceptable by Hip Hop than say, white guys? And I say more readily acceptable because all Eminems aside, a white guy in Hip Hop is addressed as such. A white rapper. There was a whole show dedicated to them; you watched it. But when a nouveau-white chick jumps on a Rap track, no one ever says, “Hey did you hear that new Lupe Fiasco song

featuring white woman Skylar Grey?” It rarely happens. Who really knows why – perhaps white girls in Hip Hop exist merely as themselves. They’re not trying to rap (unless their name is Kreayshawn) and they’re not suggesting they’d fuck you and all your friends (unless their name is Ke$ha). They’re just there, being themselves, making the music they’d make with or without your approval. Look at Dido, who made the song “Thank You” that later became the foundation for Eminem’s “Stan”. While that white girl always seems to pop up throughout Hip Hop’s three-decade tenure, lately the influx has been even greater. Over the past year or so, Hip Hop has met more white girls that they’ve loved more often than not. So to celebrate #whitegirlwinning (I’ll be making that a trending topic), here are some of Hip Hop’s current favorite white girls. Don’t worry, I’m not including myself on this list… although you should.

Formerly Holly Brook, known for singing the hook to Fort Minor’s “Where’d You Go”, the singer/songwriter penned the hook for the Eminem/Rihanna award-winning track “Love the Way You Lie”

. She then went on to lend a hook for the Diddy-Dirty Money hit “Coming Home”

Elly Jackson of UK Electro-pop duo La Roux is more or less loved by Hip Hop for one song of hers, and that is “In For the Kill.” Last season on HBO’s Entourage when Vinnie Chase (played by Adrien Grenier) was at the height of his drug-induced coma (thanks to previously mentioned porn star Sasha Grey) laying face down poolside, they closed the episode with DJ Skream’s remix of “In For the Kill” (Entourage’s Music Supervisor Scott Vener is kind of a genius). After that episode aired, rappers everywhere rejoiced and remixed it. First it was French Montana featuring Chinx Drugs (renamed “Goin In For Da Kill” – way to go, buddy), then Styles P and Jadakiss, then Game, and the list goes on. Eventually there were rumblings of who would get on La Roux’s remix of the track. And the winner was…Mr. Kanye West.

First she started out dating sometimes rapper Travie McCoy. That might have been the catalyst in Katy Perry’s widespread acceptance by Hip Hop. Now she’s a present-day P!nk of sorts, eager to get a rapper to jump on one of her hit singles to make it even bigger. It started with Snoop Dogg on “California Gurls”

and then it led into Kanye West with “E.T.”

Katy Perry is different from the previously mentioned white girls whose aesthetics include this faerie-esque way about them with gentle vocals. No, Katy is boisterous and quirky and she bats her eyelashes and licks on lollipops and gets rappers to rhyme on her albums. That seems to work very well in her favor. She even helped out Timbaland on his track “If We Ever Meet Again” off Shock Value II. Her work in Hip Hop is still not done. She’ll be back again.

Few people can forget the shock of watching the now viral video of Karmin tackling Chris Brown’s Diplo-produced track “Look At Me Now.” A man and a woman (who we now know to be named Amy and Nick) sat side by side while Nick played the piano and this pinup model looking lady breezed through Busta Rhymes’ verse like she invented breath control. That video led into Karmin’s rendition of Lil Wayne’s “6’7’”

and a phenomenon was born. Many compared Amy’s rhyming style to that of Nicki Minaj. Sure enough, Karmin covered Nicki’s “Superbass”

and who played percussion? The Roots’ bandleader ?uestlove. On Karmin’s YouTube channel, comments consistently flood the section begging Amy to conquer more rap songs. There’s no telling how long she’ll be riding that wave, but while it’s here, surf’s up!

Like Elly Jackson of LaRoux, Hayley Williams got the Hip Hop cosign for really only one song – and it wasn’t her own (or Paramore’s) it was B.o.B.’s colossal hit “Airplanes”

(which later featured Eminem on the remix

). Hayley sang the hook that had everyone singing it and quoting it on Facebook statuses – for better or worse. Because of Miss Williams everyone still asks, “Can we pretend that airplanes in the night sky are like shooting stars?” while simultaneously chanting “I could really use a wish right now.” Thank her or blame her for that hook. The choice is yours.

Don’t sleep on JoJo. She had Bow Wow on her track “Baby It’s You” back when he was still just a puppy. JoJo is a new entry in this year’s white girl race, but something says she’ll be showing up more now. Her remake of Drake’s “Marvin’s Room” (renamed “Can’t Do Better”

) had the Internet going nuts, especially with lines like “and when you’re in her, I know I’m in your head.” JoJo has clearly grown up and has the soulful chops to hold her own in R&B. She knocked poor Teyana Taylor out of the box in the “Marvin’s Room” remake department. HipHopDX’s comment section alone is proof of that. Like JoJo says on the track, “Once you’ve had the best, boy you can’t do better.”

Honorable because Chelsea Handler doesn’t make music and this is an editorial dedicated to those who do. However, the comedian/prime time host’s unabashed approach to interviewing rappers has become a rite of passage of sorts for Hip Hop artists. She asked T.I. the questions everyone else was afraid to ask, she scolded Diddy for showing up late, she called Rick Ross fat to his face, she asked Nicki Minaj “what’s up with your ass?” and let’s not forget…50 Cent. Chelsea Handler seems to love Hip Hop, and Hip Hop loves her right back.

Kathy Iandoli is HipHopDX’s Music Editor and has been writing about music professionally since 2002. In addition to DX, she has written for XXL, VIBE, The Source, MSN Music and MTV News. She lives in New Jersey. Follow her on Twitter (@Kath3000)