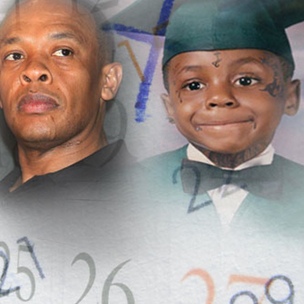 Looking for that new Weezy? What about Jeezy? Detox?

Hold that thought. So far, 2011 has been the year of the pushback. Sure, delays in Hip Hop are nothing new, but as we celebrate halftime, it’s evident that the promise of a new release – and its subsequent delay (or delays, in most cases) – should be taken with a grain of salt, now, more than ever.

The Art Of The Album Delay

Blame the game. In an age where albums leak nearly months ahead of scheduled street dates (see Beyonce’s 4  and Big Sean’s Finally Famous ), labels are quick to rearrange their release calendars for a variety of reasons. Say, if their artist doesn’t have a hit, then it might be to their benefit to send him or her back to the studio to crank one out. If said artist doesn’t have their head in the game or is too busy on tour, then the label might push back their album until they’re ready to give it 100. After all, record labels are businesses – and businesses, especially the music industry, can’t afford to take any L’s.

Or, maybe, the game ain’t to blame. Consider: some rappers want to be perfectionists. Take Dr. Dre, whose elusive Detox – now almost a decade in the making – seemed to be all but confirmed for a 2011 release. The Good Doctor even dropped off a few singles (“I Need a Doctor”

featuring Akon and Snoop Dogg), picking up some mainstream steam. Dre himself even said that the album was almost finished – back in November 2010.

Then came the release dates, and the setbacks. An April 20th release date came and went – still no Detox. Last we heard, the mythical album would arrive on July 26th. Doesn’t seem likely, given the little amount of promotion or lack of confirmation by both the label and man himself. Here we are, in the middle of 2011, with nothing but a string of broken promises to lean on.

What Kanye West & Jay-Z Could Be Learning From Dr. Dre

Fellow Rap titans Jay-Z and Kanye West took a similar approach with their joint release Watch The Throne (to be fair, they haven’t been cooking it up for a decade). Originally conceived as an EP, the big-and-little brothers kicked off the New Year with a bang, announcing during a New Year’s Eve performance that the album would arrive in just one week. It didn’t, but its single “H.A.M.”

So back to the lab it was. The promise of a January release thawed with the changing seasons, as Yeezy updated his Twitter fans with a new release date for March. For good measure, he also told fans that the follow-up to last year’s My Beautiful Dark Twisted Fantasy would arrive this summer. (Soon after, though, his Twitter account went silent – our punishment for a botched Matt Lauer interview). By March, Watch The Throne was “essentially finished,” said engineer Young Guru – yet the recording sessions continued. As of press time, there is still no release date.

Unlike top dogs who create pop-up studios and record at will, some rappers don’t hold the key to their fate. Lil Wayne, who promised to release his supposed final album Tha Carter IV, was supposed to drop the (now mildly anticipated) LP the same day he was unchained from prison – November 5, 2010. Delays came, of course, with Weezy later claiming in March that the album, which was entirely finished, would drop on May 16th. It wasn’t, and it didn’t. Now, it’s set for an August 29th release. A supposed tracklist hit the web. Several singles have graced these internets. It’s still wishful thinking to mark the end of summer as the official street date.

The list of rappers who dangle release dates in front of fans’ faces and quickly snatch them away isn’t just a string of coincidences. Just check the record: 50 Cent, Game, J. Cole, Ja Rule, Young Jeezy and more all promised to hand in albums that are yet to materialize, for an array of reasons.

The problem here isn’t that rappers are being put in label purgatory or that the game is changing to the point where artists can’t even drop an album on their own terms. Those are self-contained problems, independent of themselves.

It’s the trust issues. As the listening public, we’re allowed to feel disappointed or even lose interest when there are more album delays than tracks that make the final cut. Sure, this isn’t the film industry, where studios don’t announce movie release dates until they’re sure of it (those often come a year ahead of schedule). But that’s no excuse for this growing trend that leaves fans consistently unsatisfied, even if the wait was worth it.

And rappers wonder why fans are quick to bite the hand that feeds them – or to choose not to support the project. Listeners play the waiting game according to what labels and emcees tell them. For most, music isn’t just a luxury – it’s a way of life, and to temper with that passion can slowly sap whatever faith a fan has in the art.

Which is why it’s frustrating when a producer and rapper like Statik Selektah and Freddie Gibbs (who himself is guilty of delaying releases), can hit the studio and record an EP’s worth of tracks in under 24 hours. There may not be a middleman telling them what they can or can’t do, but they promised they would do it, did it and released it for our purchasing pleasure. Seems easy, no?

At the risk of sounding unappreciative, we understand that not everything is in the artist’s control, or even the label’s. Delays happen; we get it. But as the buzzer rings and the second half of 2011 begins in the next few weeks, all we ask is for a little more caution before blurting out what promises to be a broken release date. Even if its part of a grand marketing scheme. Because in a world where information moves at a mile a minute, the last thing we need is to wait another decade for an album.

Steven J. Horowitz is HipHopDX’s News Editor. He has written for VIBE, RollingStone.com, Spin.com and is Associate Editor for YRB Magazine. He is a New Jersey native and lives in New York City. Follow him on Twitter at @SPeriod.