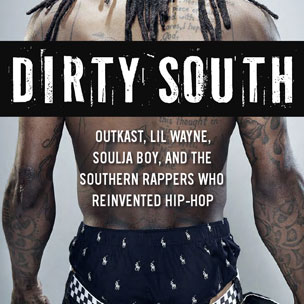 Southern Hip Hop is a dominating force in the genre. Covering regional dialects, influences and sounds in areas such as Atlanta, Miami, Houston, Memphis and New Orleans, it’s a lot to grasp. Highly-respected author Ben Westhoff breaks it all down in just-released book Dirty South: Outkast, Lil Wayne, Soulja Boy, and the Southern Rappers Who Reinvented Hip-Hop. Published on the Chicago Review Press, the easy-to-read book is written for us (and others) by one of us: the Hip Hop community.

Although the work chronicles more recent movements such as Soulja Boy, Grand Hustle and T-Pain, one of its greatest offerings is covering lesser-known or less popular facts about movements such as Luke Campbell and 2 Live Crew, J. Prince’s Rap-A-Lot Records and even 8Ball & MJG. Like we do about this time, the HipHopDX staff had a chance to read Westhoff’s new book and share with you 10 things we learned in paging through:

1. 2 Live Crew began making records about God. Pre-Luke-era 2 Live Crew found the California trio of Fresh Kid Ice, Amazing V. and Mr. Mixx making their 1984 Macola Records single “The Revelation,” which was about Heaven and Hell. Westhoff even revisited the 12-inch on the same label that birthed N.W.A. and others with the quoted verse from Amazing V., “Now your pocket is full, but can’t you see / That your soul will burn in hell for eternity?”

2. The ties between Rap-A-Lot Records and Death Row Records. For years, it’s been widely known that Death Row’s co-founder Marion “Suge” Knight and Rap-A-Lot’s James “J.” Prince are friends who have supported each others’ acts in tougher times. However, Dirty South points out why Big Mike and Mr. 3-2 were working with Snoop Doggy Dogg and Warren G in 1991 and 1992, before Mike filled in for Willie D in the Geto Boys. The ties then reportedly had to do with Michael “Harry O” Harris and Lydia Harris, who both claim to have provided seed money to the two legendary and controversial Gangsta Rap labels. When the Harris couple went to help roll out Death Row, they called on The Convicts to get their big break, and thus Big Mike had a chance to be a Death Row inmate. Had Willie D not skipped from Scarface and Bushwick, who knows how history would have been different…

3. DJ Screw’s store today. Late Houston, Texas deejay/production pioneer’s store, Screwed Up Records & Tapes. Ben Westhoff visits the Rap landmark and describes it to look as essentially a check-cashing outfit, with hundreds of covers of various Screw tapes on the wall, and the CDs housed behind a locked door. The 13 year-old operation is run today by Screw’s cousin.

4. Just how different Andre 3000 and Big Boi are. The book reveals interesting minutia that includes the fact that the two Outkast emcees travel on separate tour buses, frequently work from separate home studios, and that Andre 3000’s whereabouts are often unknown to everybody, including his partner.

5. Three early Cash Money Records artists, pre-Juvenile, have all been murdered since leaving the label. The list includes Kilo-G, Pimp Daddy and Yella Boy. Even Westhoff writes that very little is known or documented about the artists or deaths.

6. Master P’s wife and Lil Romeo’s mom was a rapper. Sonjya C. Miller (a/k/a Sonjya C) was just one of the many faces of the 1990s No Limit Records roster. Downplayed in the media, this rapper released a 1993 E-A-Ski & CMT-produced album, Married To The Mob, as well as was a prominent member of TRU throughout much of the decade. Her other son Vallentino has also pursued rapping, with the Rich Boyz.

7. Lil Jon was, at one time, a Rastafarian. The book says that in his early twenties, deeply influenced by British Reggae band Steel Pulse, the King of Crunk started growing the dreads we now know him for, and stopped eating meat.

8. DJ Drama alleges that two of his personal vehicles, a BMW 645 and a promotional van, have never been returned to him after the 2007 Federal raid launched by the RIAA.

9. Westhoff credits Cher’s 1998 hit “Do You Believe” as the first true Auto-Tune hit. In his chapter about T-Pain, Akon and DJ Khaled, the author notes how a former Exxon executive’s invention of pitch correction made a smash hit for the ’70s star, which trickled its way into urban music, later giving us years of 808’s & Heartbreak.