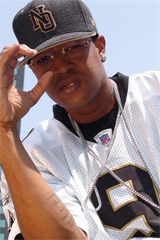 Tragedy is one word we all can relate to. From the economy today, to ridiculous gas prices, to fledgling Hip- Hop sales ,we have all been witness to tragic situations. One person who has been hit hard with tragedy is Corey “C-Murder” Miller. Hailing from New Orleans’ notorious Third Ward Calliope Projects (CP-3), C-Murder has been screaming for vengeance since a young age after seeing several murders (this is where his name stems from), experiencing poverty, to his family being heavily effected by Hurricane Katrina. But C would come to face his most life-changing tragedy in 2002. Early that year, he was charged with second degree murder for his involvement in the killing of a 16-year old boy and faced life in prison without parole. All this around the same time he was charged with disturbing the peace at a night-club that he was banned from for a previous more serious incident.

All the negativity in Murder‘s life has just overlooked the major amount of success hes earned. Through the early to late ’90s, he was one of the highest ranking officials in one of the south’s fore fathering movements The No Limit Soldiers. Breaking into the game with his brothers Silkk the Shocker and No Limit CEO and founder Master P, C-Murder made his debut as a TRU member. With critics quickly comparing the Young Buck to a southern Tupac, C initially had a hard time shaking off the comparisons. TRU‘s second album, Tru 2 Da Game, topped Billboard charts and sold over two million copies. That built momentum for C‘s first solo LP, Life or Death, which garnered platinum success. He continued to release successful albums, guest appearances and even create his own musical imprint, TRU Records.

Through all of his situations, C-Murder has been cool, calm and level headed. Hes done his time (in and out of prison) and has paid his dues all while still keeping his head up. Currently on house arrest, he sat down with HipHopDX to discuss his new album, Screamin’ 4 Vengeance, his life, his No Limit family and his current situation. If HipHop as an artform is a reflection of one’s reality, then C-Murder has to be one of, if not the realest artist the game has ever seen. Eight years after tremendous tragedy, C is looking for some triumph.

HipHopDX: So how does it feel to be back into the flow of things?

C-Murder: Man, it feels good. It’s been a long time [that] I been waiting; I’m real excited about the project that just dropped. I’m getting a lot of good responses about the album so you know I’m excited.

DX: What do you plan on accomplishing with this project, Screamin’ 4 Vengeance?

C: The main thing I want to accomplish on this project is since I been gone a minute, just to let everybody know that I’m back and let them know what level I’m on lyrically, and stuff like that, ya heard me? so I just really want to get this one to the public and let them know that C back for real and he here to stay.

DX: Being that this is your first album in a while, was it hard getting back into the creative process?

C: See, what I did was, I tried to play it smart. I wanted to be real with myself and I know I been gone a while and I ain’t sit in that booth in a while, so I wanted to just sit and record beaucoup songs for like two three months till I feel like I woke up one day and said, “Dog, I’m ready now, I’m here.” So once i got over that hump right there, it was all uphill from there.

DX: Who are some of the producers and guest appearances you have on here?

C: Mainly, the producers I got is my own team, Deadly Soundz I really want everybody to really listen to them and dissect their beats, nahmean? Its like three different dudes, they crucial. I got a track from 2 Deep Music – that’s a group down here in New Orleans. Also 2Much did a couple of hot tracks on there, thats one of the cats from Dallas but you know everybody on there did they thing.

DX: About 10 summers ago your debut album, Life or Death, went platinum. How much would you say the game has changed since then?

C: It changed a lot, because the whole process of putting the album together and the political side with the label and stuff like that, one of the majors like Priority [Records] was running the show on our end and they end, ya heard me? So [this time around,] we had creative control over everything and made all the decisions. Nowadays since sales and stuff going down, a lot of the labels more strict on a lot of things that they allow you to do.

DX: One of the many legacies of the No Limit dynasty was selling a slew of albums before major distribution. Can you talk a little bit about the independent hustle?

C: The independent hustle [is] crucial because, for one thing, you’re getting a larger percentage because you own everything. At the end of the day, you just waiting on them checks, you just got to handle your business to get the record out there and generate some sales, ya heard me? I mean nowadays cats with these majors, man, they kind of getting raped because, they get caught in the game for like seven or eight albums and getting something like 12 to 14 points on the album you know and thats ridiculous brah, so the independent game crucial if you could just make it happen and generate the sales. You get the bigger checks and get to own your masters and stuff.

DX: What made you want to start your own imprint, TRU Records?

C: At the end of the day, you got to do your own thing you got to handle your own business you know? I had a lot of talented cats that was around me and from the same hood from Calliope Projects and stuff. I was just a decision I woke up and said I got to bust a move and do what I got to do, and of course me being 100% true with it, I had to name it TRU Records.

DX: Now your brother, Master P, has moved on to make what some call more “positive” music. Do you feel any pressure being the last No Limit Soldier standing still making that same music that got you here?

C: No I don’t feel no pressure, because at the end of the day, brah, it’s just in me. I’m not trying to do this on purpose, I’m not trying let myself be tainted by whats going on in the public or let myself fall into certain situations that they want to be in. I been through a lot brah, so when I get in that booth, that’s all i think about is putting out hot music and speaking from the heart, ya heard me?

DX: How’s your relationship with Master P and Silkk the Shocker?

C: I mean we brothers, we going always be blood, ya feel me? But as far as business-wise, they going a different route from where I’m going.

DX: How did facing two life changing charges at the same time effect you personally and professionally?

DX: What inspired you to make a novel, Death Around The Corner?

C: I done read so many books just sitting back. I read about almost 500 books in a four and a half year time limit. I just set a goal for myself like this something I can do I’m just sitting here writing, so I set a goal for myself did a lot of looking into it and stuff like that, research and things man and just got focused sat down and started it, brah. Death Around The Corner was a good novel five stars by Amazon.com; [it] got good reviews ya heard me?

DX: So Besides you and your TRU camp, who are you listening to in Hip Hop right now?

C: In the tape deck right now, I got that Rick Ross, I got that Bun B, of course I got that UGK album [click to read], I’m loving T.I. music. I definitely listen to all of the 50 Cent and G-Unit music, thats whats in the tapedeck right now.

C: That was crucial. I mean I come home and Luda call me and said man bless me with this verse on this song, so he sent it and I handled my business and that was a beautiful thing right there.

DX: Now the south has been on top of Hip Hop for quite some time now, do you think you’ve paved the way for the new generation of artists?

DX: How many different divisions do you have of TRU?

C: We got a lot of different divisions. We got the graphics team down here. We got the t-shirt organization. We got the management. I mean we go all the way down to the grass cutters and driver, ya heard me? So it’s a lot of people on the team, man, its like the real TRU Records family now.

DX: Is there any advice you would give to the up and coming artists and businessmen trying to enter this game?

C: You’ve got to stick with it. I mean we had a lot of people telling us we’ll never make it and stuff like that, so you got to shake the haters off fasho. If it’s something you believe in, you just got to do what you got to do. If you’re trying to market your record, you got to take it step-by-step: press it up, promote it, hit the radio station, if you can make t-shirts, make t-shirts just be in people’s face. That’s all man. Make good music first of all, ya heard me?