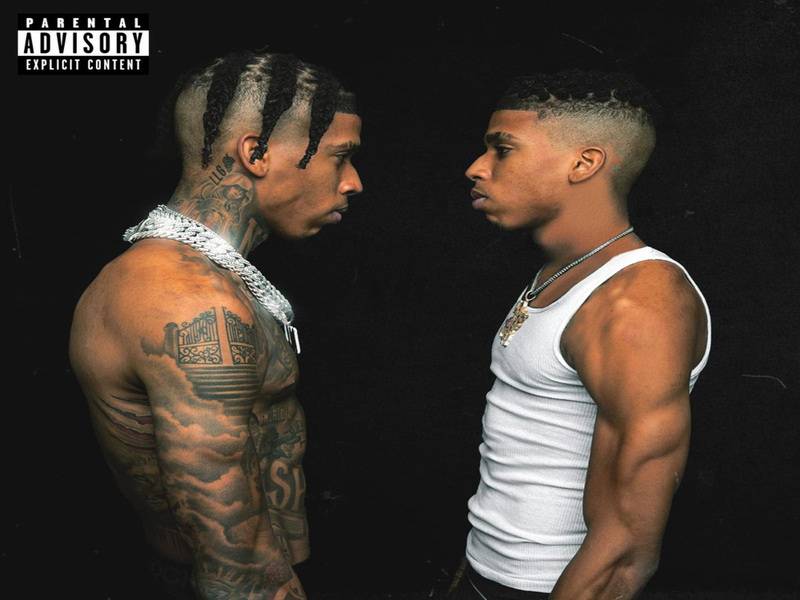 NLE Choppa has never seemed to lack focus as a rapper. At just 19 years old, the Memphis trap protégé has accumulated a shocking amount of success in little time. His 2020 debut, Top Shotta, contained a healthy mix of vulnerable melodic street anthems and braggadocios trap raps, revealing the then 17-year-old to be a young kid in conflict; he was bound to a life he didn’t choose and striving to find better ways to communicate within the confines of the violence around him.

It was this conflicted persona that led to compelling rhymes and also what helped Choppa gravitate toward holistic medicine. Given nicknames such as “NLE Chakra” from Jack Harlow, Choppa quickly became an outspoken advocate for holistic living, selling mugwort as a side hustle and speaking on the power of intention and meditation every chance he got, for better or worse.

On his 2020 mixtape From Dark To Light, Choppa’s new journey became a loose thematic focal point that spawned a handful of boundary-pushing tracks such as “Picture Me Grapin.’” Choppa’s full-fledged transformation into a spiritual champion was compelling to witness, and it was exciting to think about how he’d incorporate this newfound identity into his music.

But on Me vs. Me, Choppa reverts back to the murderous raps of his past self. The album only sparingly integrates the vulnerability and versatility Choppa seemed to possess.

There’s no denying Choppa can catch pockets and rap his ass off. “Shotta Flow 6” shows off everything that endeared fans to Choppa in the past and is one of the project’s most impressive tracks. Choppa’s voluble lyrics tumble out like an unspooling ball of yarn as the track’s rambunctious piano pushes him along. It’s a grand opening to the tape, but deflation sets in by tape’s end when it’s revealed the song is his creative apex.

Choppa’s previous melodic tendencies are instead substituted for speedy delivery and galvanized shotta flow. By “Trap Phone,” the enthusiasm for this caffeinated energy quickly wanes.

Me vs. Me lacks the versatility of past releases and feels robbed of any sort of substance beyond NLE Choppa’s youthful exuberance. As his flow spills on and on, the songs at times meld together, with the tape’s brief highlights such as “Still Hood” losing ground compared to grating moments such as “Ima Dog,” an uninspired cover of Gucci Mane’s 2009 track. Choppa pivots between a raucous hook and juvenile verses such as “ho is mad, ho is sad, ho is mad.” The song is brutish compared to the playful energy of the original.

The beats don’t help Choppa’s case. Internet Money continues their world tour to suck the life out of even the most colorful artists, the worst offender coming on “Drop Shit.” ChaseTheMoney uses cliché  woodwinds over pre-programmed basic 808s on “Too Hot,” as if the song was trying to be a less energetic version of Young Thug’s “Hot.” Even when the production is good, such as on CashMoneyAp’s “Jumpin,” Choppa misses the mark. “Final Warning” finds a truce between Choppa and his producer, with Damn E’s 808s bouncing with Choppa cold-blooded flow in unison.

“Mmm Hmm,” is a crowded amalgamation of reverberating vocal feedback and cacophonous electric guitar, a poor producing and mixing job that drowns out any clever bars Choppa might be putting forward. Luckily, these fears are quelled when the listener realizes Choppa isn’t rapping about anything interesting. The track settles for tepid Tiger King wordplay and fumbled thoughts on his fame.

Elsewhere, sexual tracks such as “Lick Me Baby” crater any perceived sensuality with laughable bars, including “I’m the lifeguard in her pool/I’m swimming in the deepest feet.” As for the features, they rarely elevate NLE Choppa. Polo G seems to dumb himself down on “Jumpin” to match Choppa’s energy as does Moneybagg Yo on “Too Hot.” Young Thug and G Herbo both add much-needed flavor to “Push It” and “From Chicago To Memphis” that Choppa simply doesn’t match.

One moment on the project makes good on Choppa’s potential. “Youngest To Ever Do It” showcases the greatness he still has stored away, going into detail about his conflicts with the morality of street life, asking for understanding and forgiveness for what he knows is wrong.

“But to the people I offended, hoping you can apprehend me,” he raps. “Understand where I’m going through ‘for you judge me for the life that I’m livin’,” the only moment fans see Choppa as more than a faceless rich rapper with average boasts and shotta flow.

Despite being allegedly in competition with himself, the resulting effort is forgettable and safe, devoid of the musical courage Choppa is capable of. But he has plenty of time to refocus; it’s clear why this is billed as a mixtape rather than an album. Me vs. Me shows what happens when a promising rapper cuts corners and wilts to the will of outside expectations.

NLE CHOPPA KILLED MY DOG! I was just walking my dog when a car came by. I heard mid coming from it, and quickly realized it was NLE Choppa !! The noise was so harsh that I had to cover my ears, and my dog instantly jumped in front of the car to save itself from the mid music. RIP

That mane @Nlechoppa1 spazzing on the first damn song.

this nigga nle choppa done set his shit as a ep so if it flops his fans gotta excuse ? pic.twitter.com/i6GSVKJekL