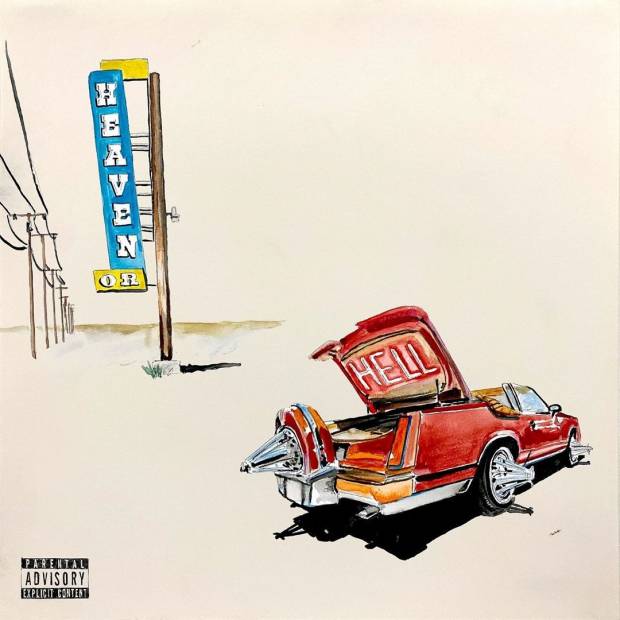 The rise of Don Toliver has been swift and certain. His introduction to the mainstream arrived through Travis Scott, when the two Houston natives tag-teamed on “Can’t Say,” a standout track from 2018’s monsterpiece, ASTROWORLD. Immediately, Toliver’s top-tier voice hinted at impending star power, and ensuing high-profile placements kept his name on the rise throughout 2019. Now, as society retreats indoors for the foreseeable future, Don is stepping out into the spotlight, reaffirming his talent on Heaven Or Hell.

Sonically, it’s the natural evolution from 2018’s Donny Womack mixtape. His anxious vibrato is just as impressive, and his melodies are no less captivating. There’s a sharp increase in the production value, though, likely due to the addition of Mike Dean and the Cactus Jack team. Make no mistake: the beats on Donny Womack were catchy enough to get the job done (cc: “Holdin’ Steel”). Here, however, each song receives a pristine polish, elevating it from mixtape status to a collection worthy of the distinguished debut album.

Off the bat, the titular intro track creates a woozy ambiance, with chilling synths that add layers of discomfort behind his lyrics. As the album unfolds, there’s a constant sense of distress, whether because of the drugs, an unresponsive love interest, or both. “Euphoria” is a case of the latter, where he reflects on his own inability to stay loyal, recognizing the trail of broken hearts he’s left in his past.

On “Can’t Feel My Legs,” an attempt at a face-to-face conversation falls into oblivion after Toliver reveals he’s too incapacitated to even move. Over bouncing, up-tempo percussion, “Wasted” toes a similar line, imploring his love interest not to waste their limited time together. While the lyrical content isn’t anything extraordinary, his animated delivery makes the songs nearly irresistible, adding the audible tricks to give it impressive replay value.

Any time Toliver reaches beyond typical melodies to create unexpected progressions, Heaven Or Hell truly shines. The best song on the album might be “Candy,” with swinging drums that add blissful textures to a deceptively haunting storyline. Here, Toliver faces the realization that “candy couldn’t be so sweet,” and that he’s been living a lie for far too long.

There are a few missteps on the album: see “Spaceship,” complete with a Sheck Wes verse that resembles more of a broken-down hooptie than anything powerful enough to reach outer space. “Company” is the rare occasion where he falls back on tired patterns rather than innovative melodies, and the song flops as a result.

Judging by the grandiose outros and thunderous breakdowns throughout the album, it’s clear that Toliver is Travis Scott’s child; and by extension, a child of Kanye West. There’s meticulous detail put into each bass hit and warbling synth, with enough reverb to engulf the listener into Toliver’s world. The golden-voiced singer from Houston has received plenty of hype in the first quarter of 2020; on Heaven Or Hell, he proves he can live up to it.