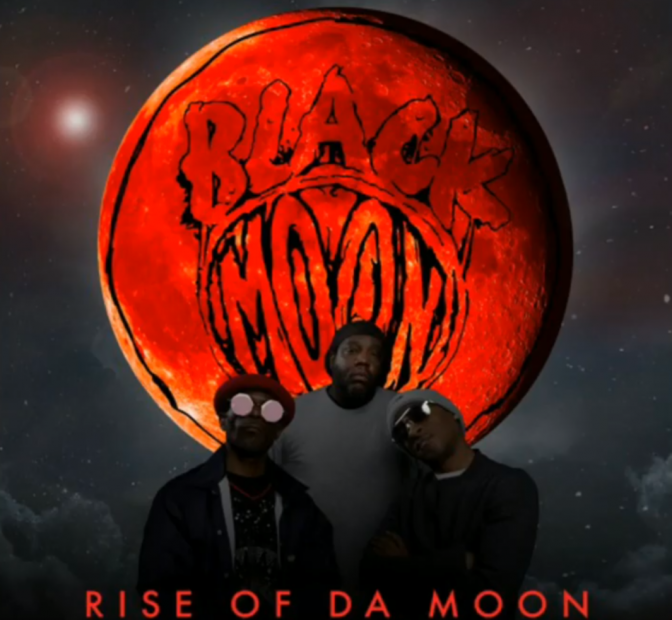 Prone to intermittent album releases since their seminal 1993 debut Enta Da Stage, Black Moon’s Rise Of Da Moon falls into the spectrum of solid comeback attempts including A Tribe Called Quest’s we got it from here…thank you for your service and Little Brother’s May The Lord Watch.

The New York trio consisting of Boot Camp Clik and Duck Down Music co-founder Buckshot, his rhyme partner 5-Ft. Accelerator and DJ Evil Dee stick to their formula that made them 90s East Coast rap saviors when they emerged with the late The Notorious B.I.G. and Wu-Tang Clan.

On the album’s opening three-chord piano-laced first single “Creep With Me,” Buck wastes no time to discuss his elder statesmanship in Hip Hop admonishing today’s younger generation about the fleeting ups and downs of fame.

The steady ride with Black Moon as a nighttime underground tour guide continues on synth keyboard stabs and mellow jazz guitar strums of “Da Don Flow” and subwoofer-reverberating “AHAAA,” which addresses police abuse of inner-city black residents. Then 5 Ft. re-introduces himself with his pitbull-barking energy on the brassy fifth track “Pop Off.”

Black Moon repurposes its past lyrics as earworms for its diehards. This includes the Caribbean steele drum and Jamaican patois-infused “Ease Back” featuring Method Man and Steele from Smif-N-Wessun, in which the hook interpolates bars from Black Moon’s “Shit Iz Real” on Enta Da Stage. Also, the church organ-infused sample loop of “At Night,” taken from Black Moon’s opening lyrics from its 1993 song “6 Feet Deep,” sounds like the mono-recorded songs during the group’s heyday.

The best cut on the album feels like vintage Boot Camp’s Timberland-stomping “Impossible,” which is the 2019 version of “Black Smif-N-Wessun” as the Clik’s most celebrated duo Tek and Steele drop jewels with Buck over an sitar arpeggios booming bass and snares. Other standout cuts include the uptempo “Pay Back,” the booming “Black Moon Rise,” “Roll With Me” featuring Tek that sports braggadocious bars about success and fulfilling females romantic desires and the album closer “Time Flys.”

There are a few shortcomings on the project. Several of the track’s bare choruses repeating the song title’s such as ‘Children Of The Night” featuring Rockness Monsta and the LP’s slowest cut “Look At Them.” On “General Feva,” it results in a mere filler just to give his 5 Ft. his requisite solo track like previous decent songs “Son Get Wrec” and “For All Y’all” and “The Fever” on the group’s respective first three albums.

After tragically losing its biggest star Sean Price in 2015, Rise Of Da Moon brings the Duck Down imprint to end the 2010s on a crest and full-circle moment since its inception 25 years ago along with Smif-N-Wessun’s 9th Wonder and Soul Council-produced The All released in February.

It also proves rap fans will always remain open to Brooklyn hardcore boom-bap, no matter how many MCs of various subgenres rise to fame and get dismissed in the rap game.