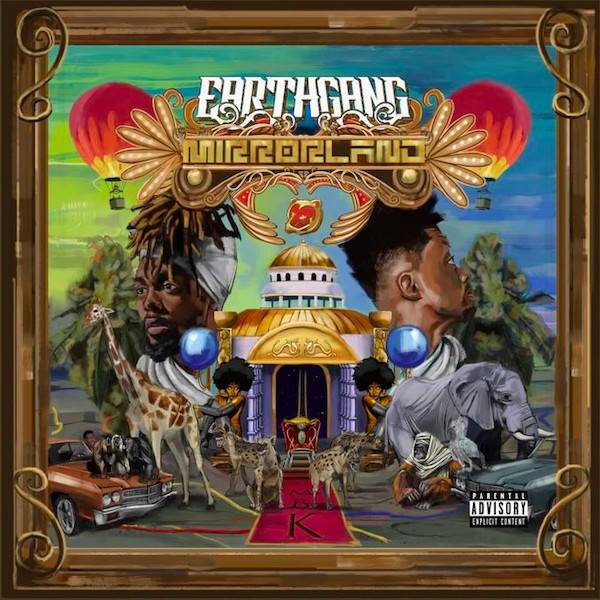 There is something to be said for taking the time to let a project come together as it should. This mantra seems to have defined the careers of Atlanta duo Johnny Venus and Doctur Dot, collectively known as EarthGang. Fans had patiently anticipated the duo’s major-label debut since the release of February 2018’s Royalty.

Mirrorland was finally delivered on Friday (September 6) — and It appears that good things come to those who wait.

There is a vast richness in the thematic elements of this 14-song project. Musically, the infectious production of Childish Major (“Top Down”), Natra Average (“This Side”), Pete Scum Nebula (“Blue Moon”) and more never allows the aesthetic to get dark — even when the content veers that way.

Brilliance — as it has been in the past — comes from the ability to get very real and vivid quickly without killing the vibe. On “Top Down,” for example,” we hear Dot seemingly floored when questioned about his mental health by an old flame. He then drops a R.I.P. to three fallen friends (something done multiple times on the LP).

Coping is a significant theme throughout the project, especially as it pertains to holding together relationships and — and in a few instances, sanity. “This Side” plays out like a collection of late-night thoughts weighing heavy on their minds. Even on “UP,” the chorus hints at their stress of wearing a breadwinner role.

The album does have a tremendous amount of balance. Their collaborative effort with Young Thug “Proud Of U” is catchier than a cold in a preschool. The almost Dilla-tinged neo-soul vibe of “Blue Moon” is a sparkly gem that grabs you by surprise.

The magic of EarthGang is that they’re able to easily traverse soundscapes that swim against the current while remaining so connected to their southern roots (musically and culturally).

They’re playfully aware of how deep they can get on tracks, too. They even lay it out on various songs. Johnny’s verse on “LaLa Challenge” as an example chastizes fake tough-guy rappers who aren’t dropping any real substance or reality.

Comparisons have become an overshadowing elephant in the room for Mirrorland, but — truthfully — calling the duo a new iteration of Outkast is off-base. While fair, especially if you’ve been following their three EP lead up, it downplays the other influences that can be easily gleaned from this body of work.

The main issue becomes when these influences become overtly apparent during some of the album’s bigger moments. For example, “LaLa Challenge” sounds so much CeeLo is singing at the end of the song that it feels weird that they didn’t just have him do it. On “Proud Of U,” Johnny and Young Thug are almost indistinguishable at a few points — and Johnny’s first verse has very strong similarities to Chance The Rapper’s swag.

Ultimately, Mirrorland is a love letter to the city. Not the glitzy Atlanta either; instead, the duo explores the unsettling underbelly within which they were cultivated as artists — and men. This is apparent from the subtle references to specific locations and events (like the Interstate 85 bridge collapse of 2017 referenced in Johnny’s first verse on “Wings”). Much like Travis Scott’s Astroworld, hyper-regionalized gloss fails to take away anything from an otherwise universally relatable body of eclectic earworms.

EarthGang are rapping and harmonizing the sights and sound that make up the musical hubs’ cultural and social-economical tapestry. This isn’t a new Outkast.

This is a new Atlanta.

You see… Atlanta been rocking with us. It’s been Zone 4, SWATS all day an’ day. We’re blessed to stand on the shoulders of greatness and be a light for a NEW generation. To be compared to legends is a humbling honor. But know that we’re blazing our OWN path for the next ones out of Atlanta. There’s only one #Outkast there’s only one #GoodieMob and there’s only #DungeonFamily. AND #WeAreEARTHGANG BABYYYYYYY. We’re just getting started… ✌?✌?