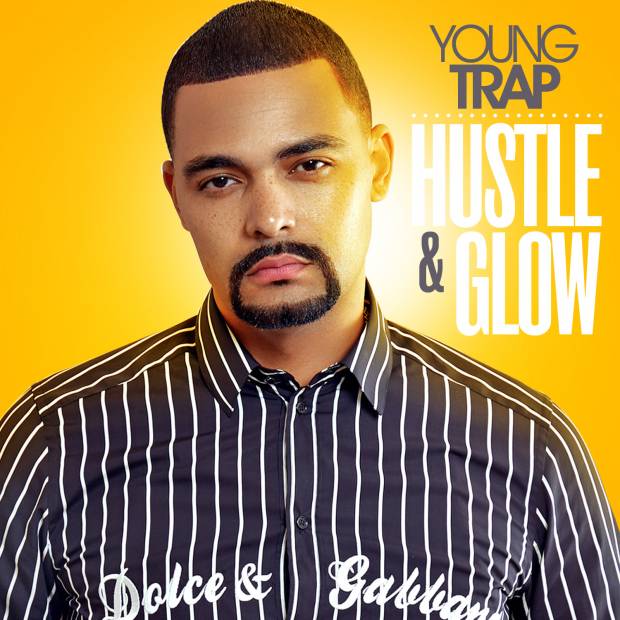 Something is intriguing about Memphis rapper Young Trap. Across his brand new 11-song LP, Hustle & Glow, he shows a lot of different versions of himself that (all at once) make him stand out and blend in.

Having been relatively quiet since the release of the third installment of his Debonaire Music series — which dropped in 2013 — he’s been making some noise with the off-kilter fire single “On My Belt” as well as “Too Much Sauce.” Though he’s wrangled some high-profile features for this project, there is a lack of consistency that keeps it from reaching its full potential.

There is an unspoken sense of authenticity that oozes through Young Trap’s ability use a very familiar at times harmonious flow that manages to come through with a hint of originality at the hands of his refreshing cadence. This project is well-produced — and the curation has allowed him to sparkle on everything he touches. Where it gets a little monotonous is the subject matter; at it’s best, Trap wears his heart on his sleeve. “Love On You” featuring Kyle Sterling is a surprisingly out of place record low-key professing rekindled love for a high-school crush that got away.

What makes it stick out, are songs like “I’m a Dog” — an almost generic attempt at flossing his ability to smash O.P.P. Oddly, “My Ex” and even the Bay Area slapper “Fuck Love” featuring Too $hort seems to create this sense that he’s been hurt and isn’t about to make the same mistake again.

“Get Scooped” is another standout; though he puts on his playboy hat during the second verse, it’s the first verse that again seems to paint the opposite picture — saying he’s going to make a child with the young woman he’s bedding.

Interestingly, alternate sequencing could almost tell a love story, though it’s evident that not what he’s trying to do. Making it clear where he’s from and what he’s repping on the Boosie Badazz assisted “For The Hood,” he’s not about to get too in his feelings. Playing out more as a playlist than a cohesive body of work, he never gets too street as to create music that couldn’t easily fit into any notable playlist.

Hustle & Glow is by no means a masterpiece begging for multiple listens and interpretations, as it’s quite straightforward in that sense. There are more than a few reasons to love it though, and although Young Trap doesn’t quite make a case for next-level stardom, he more than deserves a spot on the radar.