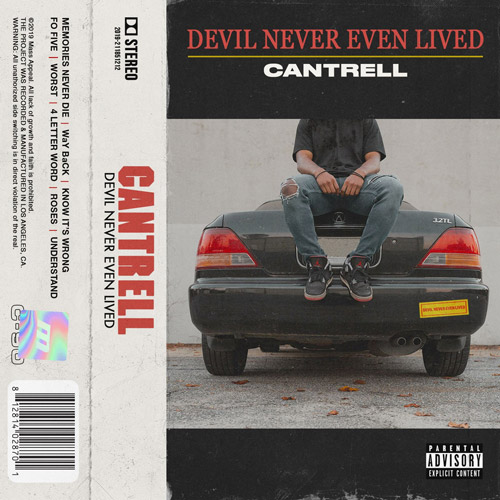 Most rappers follow a simple-yet-disappointing trajectory. Their breakout project is full of honest musings that capture the ears and souls of the youth — only to release a hollow second offering. Cantrell is an exception, though. Devil Never Even Lived, the Mass Appeal signee’s follow up to Stardust 2 Angels, only gets deeper into his heart and soul, making for enriched, even touching music.

It also cements Cantrell as currently the best solo artist on Mass Appeal (that includes 2019 Nas).

While Cantrell’s first EP found him focused on his external dreams of making it big, this EP finds him looking inward. He’s still nostalgic, as he toasts to his old life while celebrating his new on the opening “Memories Never Die.” “This that Holy Bible and a Gucci bag,” he quips, hearkening to early Kanye West, though the piano keys and Cantrell’s conversational flow are uniquely subdued.

After the wistful “Way Back,” Cantrell stirs the nitty gritty makeup of his soul. “Know It’s Wrong” may never get the same radio play as a Cardi B joint, but it’s a solid single with, ahem, mass appeal that still maintains artistic integrity. The waterlogged chipmunk soul makes the cut hummable while Cantrell dives into the dual emotions of self-disgust and outward contempt. That he’s able to harness such complexity into a catchy package stamps him an artist with crossover potential and imbues Devil Never Even Lived with a sense of focus and skill.

Perhaps Cantrell’s strongest asset is his consistency. Even “Fo Five” which doesn’t say much at all, functions as a necessary breather before he delves into heavier and heavier subject matter on the EP’s latter half. “Worst” is the only real weak link, as the downbeat production detracts from the sense of spirituality the cut is supposed to have.

And yet, Cantrell doesn’t stay down long, as he creates a beautiful love song in the form of “4 Letter Word.” The cut’s distorted yet bright piano keys create for a classic Hollywood feel that perfectly fits as the backdrop for Cantrell’s smitten-saturated lyricism. The track is followed by the fear-laden “Roses,” which turns the piano keys from sunny to lamenting. “I’ma give you this rose/Hopin’ it shows/You’re never forgotten, I’ll see you on the other side,” he impactfully raps. Placing such a joyous song like “4 Letter Word” back-to-back with “Roses” shows off Cantrell’s remarkable range and marks Devil Never Even Lived with a sense of classicism while remaining fresh.

Cantrell’s whirlwind of emotions is tied together on “Understand,” as he spits some of his most relatable raps to date: “I been looking for guidance, I been racking up mileage/I’ve been running from problems, I’ve been slippin’ and fallin’.” He comes to the conclusion that life is a journey, and he understands “we’ll never really understand.” Cantrell’s uncle talking to him in skits throughout the album, and especially at the end, is reminiscent of Kendrick Lamar’s cousin Carl leaving voicemails on DAMN., but the monologues fit into Cantrell’s unique narrative of a man accepting life on life’s terms.

It’s remarkable that Cantrell has learned so much at such a young age, and his wisdom sets him apart from his peers. It will be exciting to watch him continue to grow, but for now, Devil Never Even Lived serves as an outstanding foray into life, love, and the contentment with what is.