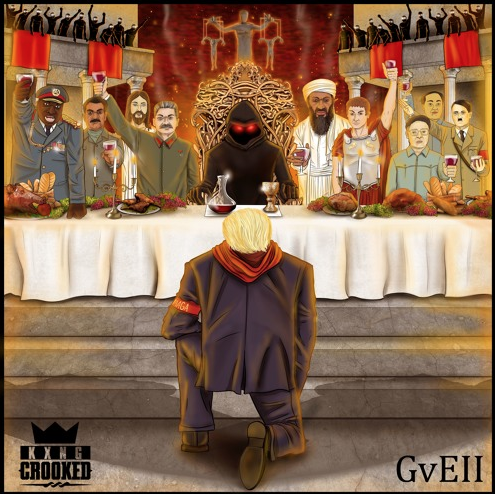 When we last heard from KXNG Crooked, he led the charge against racial, political, and socioeconomic injustices on Good Vs. Evil, which dropped shortly after The Orange Muskrat was elected. We’re now a full year into his shenanigans and tensions have only heated up and Crooked’s blistering sequel album matches bigotry with a deafening call to action atop production a few clicks below his level of expertise.

“The Red Empire” signifies Trump’s tyrannical reign and permeates the album’s subject matter. Crooked raps about police brutality, privatized prisons, corruption and Black-on-Black violence like the fate of the world depends on his flow. He absolutely bodies “The MAGA Continues” with bars like, “Used to kill us in the dark, now they just kill us in the light/Guess they figure if they pull the trigger on niggas that Martin Luther King fought for, what’s a civil right?” His controlled tenacity and raw conviction give added meaning to these lyrics at a time when half-baked protest music is readily accessible.

As a member of the ultra-lyrical (albeit defunct) supergroup Slaughterhouse, speed rapping and outstanding multisyllabic rhymes are to be expected. However, KXNG raises the bars beyond technical brilliance and, much like on the first go-round, flexes his muscles as an impressive concept rapper. He adopts a flow and delivery akin to Slick Rick’s as he rhymes from the point of view of 45 on “Red Hood’s Plot”: “I do whatever it takes just to gather my riches/The empire’s killing all of you son of bitches.” Curveballs like these keep listeners on their toes and turn standard fare education into outright edutainment.

“Red Hood’s Plots,” while noteworthy, is small potatoes compared to “Shoot Back 2 (Dear Officer),” in which Crooked goes beyond a Slick Rick impersonation and rivals the legend in the art of storytelling. After voraciously tearing into crooked officers, he ties police’s unjustified killings with the KKK murders of the Jim Crow Era. Jay Wash’s beat transitions from a relentless thumper to a rhythmic underscore of KXNG’s tale of revenge against racial killings. Without this cut, Good vs. Evil II: The Red Empire would still be a solid protest album. It’s inclusion drives home a hard-hitting testimony of injustice that simply can’t be ignored.

While Jay Wash’s beat was an exercise in next-level production, there are multiple tracks on the album that suffer from lackluster sonics. Crooked told #DXLive that the producers on this album are “up-and-coming hungry guys,” and the music reflects that, for better and for worse. Audio Jones’ raw drums and foreboding bassline ideally complement Crooked’s in-your-face lyricism on “Brainwashed Ni666a,” but Aktive’s attempt at a haunting beat on “GiveUDatHammer” would be better suited for a “B” horror flick. C-Wash’s “Adderall Addicts” and IllEagle’s “Cowboy Bebop” similarly underwhelm, with the latter’s cluttered and mechanical beat change detracting from KXNG’s compelling presence.

KXNG Crooked’s uncompromising stance more often than not supersedes the album’s flaws. He holds everyone — black, white, rich, poor — accountable, proclaiming on “Stand” that “We gotta do better.” It’s a sentiment that pervades Good vs. Evil II: The Red Empire with relevancy and urgency. It just could have benefitted from better anarchist theme music.