Review: KXNG Crooked Is A Lyrical Exorcist On "Good Vs. Evil" 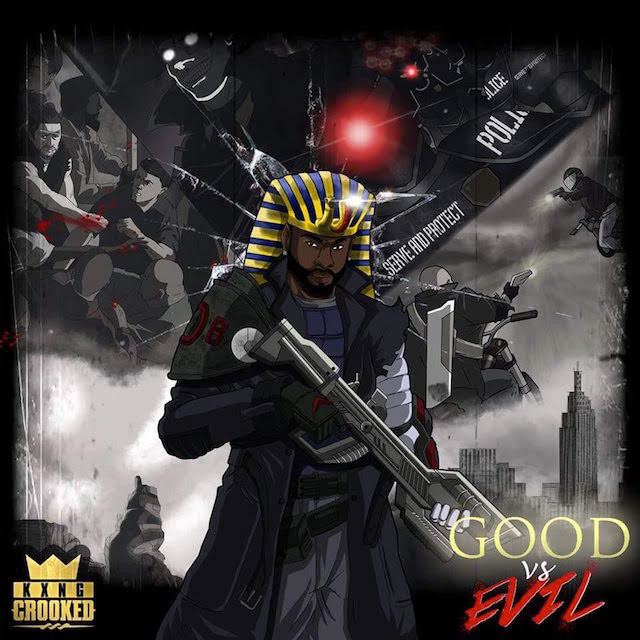 Along with KXNG Crooked’s veteran status comes the vast network of fellow artists and producers the Slaugterhouse tenant linked up with over the course of the last two decades. Most of which he presumably tapped into for his new concept album, Good Vs. Evil.

With features from Eminem, Tech N9ne, Just Blaze, Xzibit, and RZA of Wu-Tang Clan, Crooked pulls out all the stops as he rips apart the socio-political landscape with his lyrical assault weapons. Rapping from a superhero persona he cultivated for himself, he wages a war of words on racial and economic injustices, police brutality and the lack of accountability, a crumbling education system, government agencies, systemic racism, and the general apathy for civil rights.

From the album intro “A Just Message” with Just Blaze to the brutal RZA-assisted album closer “Puppet Master,” he stays consistent with his intent — to shine a spotlight on everything he deems unjust in the world, a huge undertaking, but necessary in a time of such blatant divisiveness. On the album’s first single, “Welcome To Planet X,” Eminem offers a brief but voracious verse that highlights the alternate reality Crooked describes, which is the crux of the album. “You either rich or you poor now/digital identity chip implanted in everybody born now/being poor is like fighting a war now/no energy to fight the real enemy ‘cuz you worn out,” he spits with conviction as his imagination runs wild with the “new world order” he’s created.

While the overall tone of Good Vs. Evil remains dark with the urgency of Crooked’s voice peppered throughout, there are a couple of moments where the mood shifts to a more upbeat vibe. Most notably on “Dem People” with Xzibit and SAS, and “Revolutionary Funk S” with P Funk Pavarotti, the latter delivering easily one of the project’s funkiest and freshest beats. It leads up to the Tech N9ne collab, “Shoot Back (Dear Officer),” which takes aim at police brutality by penning an audible letter to those who have been responsible for taking the lives of unarmed Black men.

There’s no doubt Good Vs. Evil is a well-executed and carefully crafted album. It only trips up a couple of times. “CrazyPsychoLoco” stands out like a sore thumb with its basic, commercialized beat and awkward melody while the hook on “I Want To Kill You” doesn’t seem to fit with the aesthetic of the rest of the 14-track project. However, KXNG Crooked is able to capture the critical nature of the need for action. The raw emotion can be felt in every syllable he utters and he easily brings the concept of Good Vs. Evil to the forefront, accomplishing what he clearly set out to do in the first place — igniting a fire within.