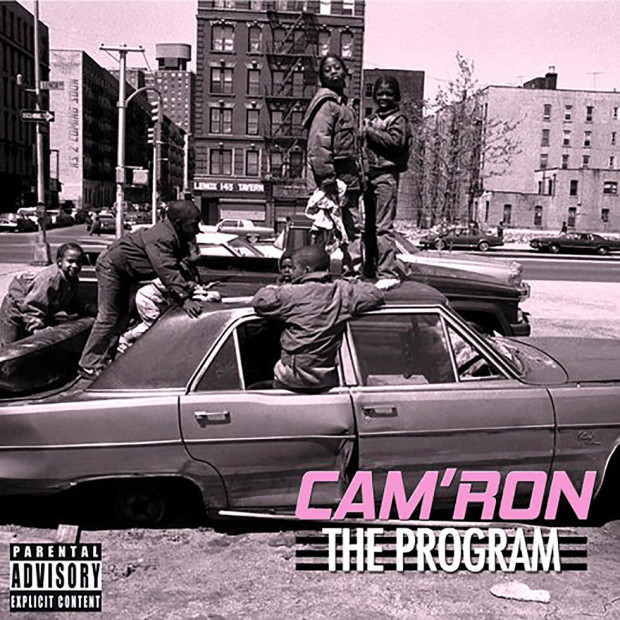 Somewhere within the near infinite stanzas of classic Cam’ron quotables lies the time the Harlem mayor told Miss Jones, “All this music and y’all running around hype to come back … music is wack; that ain’t even no real money. I just do it because I’m nice!”

There once was a time in Hip Hop when Killa Cam was just as influential a rap superstar as the game had ever seen. Whether he had hardrock street types marauding around in pink outfits or even the shyest of mofos getting fresh with any type of authority figure. But after Dipset broke up, his major label ties severed, and Cam put the brakes on any TLC he put into his craft.

The Program, his first full-length project in two years, applies the aforementioned quote to his current goals to tread water as opposed to making a big splash.

It doesn’t take a historian to note that New York Hip Hop no longer has a unifying sound but Cam’ron being the elder statesman he is … well, a man gotta live what he know, word to Omar Little. The Program finds producers such as Just Blaze, araabMUZIK, Dollavision and ADM laying a traditional sample framework for Cam to unload his trusted cocksure cadence over 15 tracks. Never one to bite his tongue unless it was a consequence from talking shit, Jaffe Joe’s unexpected choice of subject to center around the thumping “Coleslaw” makes it an immediate standout.

“Kanye got on stage, what he do?/ Played JAY-Z out/ What he do next?/ Check into the crazy house?/ Fuck that, you made a living talking greasy/ Besides that man you Yeezy with the Yeezy’s!/ Be yourself, you ain’t gotta go AWOL/ And fuck that Ye, I’ve been this way since yay tall/ If you regret it then dead it but if you said it you said it,” he coldly raps to start the track.

More blatant diplomacy is found on “The Other Side,” where araabMUZIK’s score resembles an out of order game of Galactic, and the Just Blaze-produced “Kiss Myself,” where a flossing Cam’ron jokes how he had to “steal” the beat and pulls off a throwback of sorts to the days of pink fur and gaudy eagle chains.

It’s the production that keeps The Program from being labeled a true return to greatness. Long gone are the days when The Heatmakerz ushered in chipmunk soul before Kanye carried the MPC torch and the majority of the tracks simply don’t elevate Killa’s undying wit. Mislabeled mixtape or not, there is nothing impressive about hearing Cam rap to the well-worn “Be Real Black For Me” sample (“Chop It Up”), Bill Withers’ “Lean On Me” (“Lean”) or Cyndi Lauper’s 80s staple “Time After Time” (the sour Sen City reunion, “Dime After Dime”).

If anything, the project confirms that unlike many peers of his generation, Cam is incapable of truly falling off. The LP’s anchor, “UWasntThere,” is a welcomed trek down memory lane where he shouts out all the soldiers with diplomatic immunity and gives scenic detail on how he used to get it in Ohio. Let’s just hope his storytelling has a more enticing soundtrack next time.