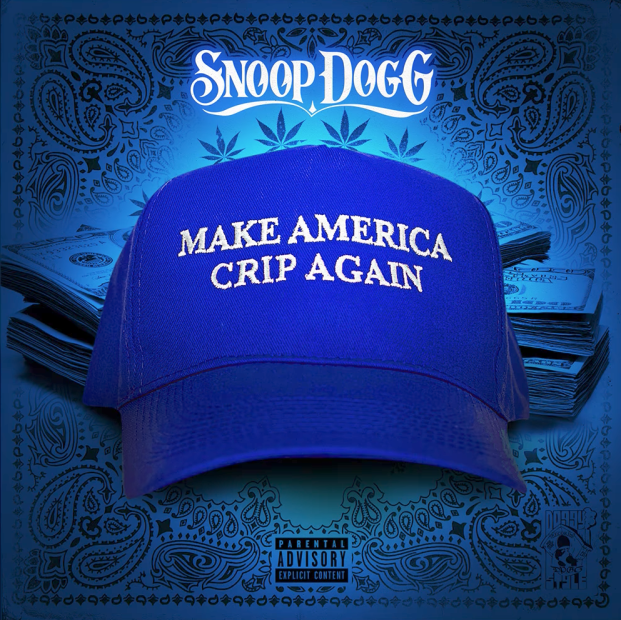 Since bursting onto the scene in 1992 with his explosive bars on Dr. Dre’s “Deep Cover,” the inimitable Snoop Dogg has become a mainstay in music and pop culture. From Long Beach gang banger to illustrious multi-millionaire and co-host of VH1’s Martha & Snoop’s Potluck Dinner Party, Uncle Snoop’s Criptastic journey has been thoroughly detailed with a navy blue brush throughout his stacked catalog.

His latest — Make America Crip Again — is a short, eight-track EP that finds Mr. Calvin Broadus rapping from two different perspectives over a soundtrack of R&B, G-Funk and classic gangsta rap. The title, coupled with the blue cover art and its blue bandana background, makes it blatantly obvious that gangsta Snoop has come out of retirement for this one.

Album opener “M.A.C.A.” — which begins with a nod to Slick Rick and Doug E. Fresh — finds him flexing his O.G. status with lines like, “But don’t trip, we Crip/ And we gang up too/ And if I do a count/ I’m sure we got more guns than you.”

On the flip side, he also allows his maturity to shine through, taking on the role of a wise rap professor. “G status, earned that/ Now that I’m your OG, it’s my job to teach you/ Show you, look out, reach you/ Every chance you get, hit that lick and get that shit/ And put your name down and your thang down/ We gon’ make America crip again,” he spits.

Throughout the album, he seems to wrestle with these two dualities. On one hand, he’s the seasoned gangsta rap legend who’s paid his dues, but on the other, he’s a married man with three children, one grandchild and a heap of responsibilities.

For example, on songs like “Good Foot” with Kid Capri, it would be easy to question his authenticity. Lines like, “Penthouse suites with about 40 hoes/ Tanqueray glasses smoke fills the air/ And hoes with fat asses playing truth or dare,” almost ring hallow.

Only two songs later, he’s proclaiming his undying love for his wife on “My Last Name,” which plays like an apology for his wild ways. The hook, provided by Doggy Style Records’ artist October London, questions why his woman would be bothered by any of those “hoes.”

While at the song’s core, the sentiment is commendable, Snoop’s bars are sloppy and suffer with predictable lines comparing his romantic relationship to JAY-Z and Beyoncé’s.

Album highlights “Dis Finna Be A Breeze!” featuring Ha Ha Davis, and (believe it or not) “3’s Company” with Chris Brown and O.T. Genasis bring the heat production wise. The deep, rolling bass paired with the burgeoning Long Beach rapper’s bars add a freshness to the latter, showcasing O.T.’s indisputable talent on the mic, while Brown’s vocal hook (although executed well) seems unnecessary.

Snoop’s follow-up to Neva Left comes to a quiet close with “Fly Away,” a song that could have been pulled from an old Color Me Badd album. Peppered with Snoop’s staccato-like delivery, it again borders on mild cheesiness, but then again, he’s getting ready to release a gospel album, so maybe he’s just preparing his listeners for the transition.

Either way, Make America Crip Again is more like a hobble — it’s not terrible, but it’s a far cry from what made Snoop Tha Doggfather in the first place. The days of “Gin & Juice” may be gone, but at least the G’s still in him.