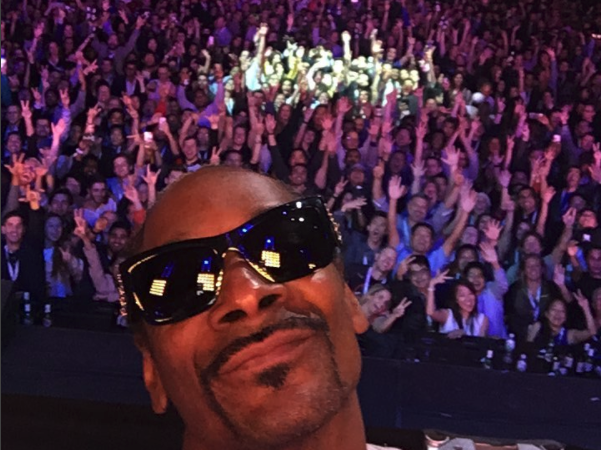 Snoop Dogg is emphasizing the blue in red, white and blue. The D-O-Double G has released a brand new EP titled Make America Crip Again, which probably won’t go over well with the pro-Trump crowd.

Tha Doggfather’s latest project features eight tracks and doesn’t rely on marquee guests. Chris Brown and O.T. Genasis make appearances, but the rest of the contributors are getting a major look by showing up on a Snoop EP.

Check out the stream, cover art and tracklist for Snoop’s Make America Crip Again below.

(The original version of this article was published on October 16, 2017 and can found below.)

It looks like Snoop Dogg’s next project is titled Make America Crip Again. The O.G. West Coast rapper took to Instagram over the weekend to unveil the release date and show off what appears to be the project’s cover art.

According to the caption, the album is expected to arrive on October 27 and marks the follow-up to Neva Left, which he dropped in May.

The title is a reference to the slogan Donald Trump used throughout his 2016 presidential campaign, “Make American Great Again.”

In a subsequent Instagram post, Snoop again teased the project while watching Sunday night’s (October 14) NFL game between the Kansas City Chiefs and the Pittsburgh Steelers.

Snoop has been an outspoken critic of Trump and Trump is clearly not a fan of Snoop. The president criticized the “Murder Was The Case” rapper earlier this year after he appeared in the music video for BADBADNOTGOOD’s “Lavender.” In the visual, Snoop takes aim at a character called “Ronald Klump,” kidnapping him and chaining him up before firing at him with a toy gun.

Trump tweeted, “Can you imagine what the outcry would be if @SnoopDogg, failing career and all, had aimed and fired the gun at President Obama? Jail time!”

The Doggfather’s new project is not the only one he’s working on. During a March interview with Dr. Dre and The Pharmacy, Snoop revealed he was planning on releasing a gospel album.