Review: 21 Savage Attempts To Stretch His Musical Wings On "Issa" 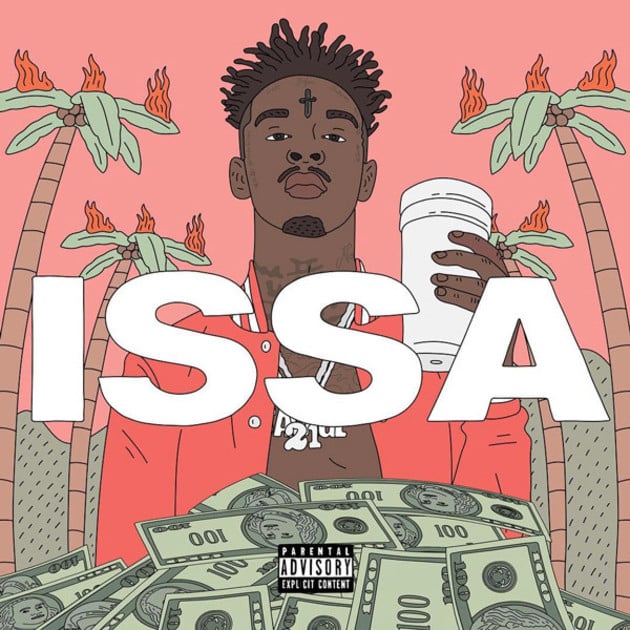 21 Savage built his reputation in the underground before experiencing mainstream success in 2016 thanks to the Metro Boomin-helmed Savage Mode. The project was relatively short but incredibly potent. Metro accentuated 21’s menacing yet dry delivery by utilizing an array of measured and sinister sounding beats.

One year later, 21 seems determined to not be pigeonholed by his breakout sound. On his solo debut Issa, the Atlanta rapper goes to great lengths to display a versatility that was not present on his star-creating project. He still delivers plenty of brutal tales about the street life, but his delivery and the brighter production aim to make the content a bit more palatable.

21’s efforts sometimes go in vain and occasionally produce mediocre results, but the strides made are certainly commendable. On “Famous,” he conveys his rise in the rap game in a flashier manner. Both Metro Boomin and Zaytoven craft a beat that’s mellow instead of grim and 21 adapts by adding a little flavor to his rhymes, straining his vocals and even employing some Auto-Tune. “Dead People” is another notable example of 21’s change in approach. The 24-year-old abandons the slow, plodding flow for an up-tempo one that matches the demanding pace of Southside and Jake One’s production.

Issa’s ex-factor ultimately comes courtesy of 21’s newfound (or at least newly publicized) social consciousness. “Nothin New” is an answer to those who might believe 21 is simply glorifying the street life. Although many can’t tell judging from the lack of Twitter activism this side of Talib Kweli, he’s more than aware of the systemic racism and dire circumstances that bred him. “I used to sell dope, nigga, now I can’t vote/Popping Percocets to kill the pain, I can’t cope/Anger in my genes, they used to hang us up with ropes/Civil rights came so they flood the hood with coke/Breaking down my people, tryna kill our faith and hope/They killed Martin Luther King and all he did was spoke,” he laments on the second verse.

While “Nothin New” is a bright spot in 21’s development, the Slaughter Gang rhymer’s ventures into love songs are a glaring weakness. 21’s persona already miscasts him for such records as it feels like watching Vin Diesel try to do Shakespeare. The execution makes the awkward endeavor all the worse, as heard on “Facetime” and “Special.” The former sees our heartless hero holding down his best Drake impression but fail miserably with a cringeworthy hook only Amber Rose could love.

Another downfall of Issa is its runtime. 56 minutes is a perfectly fine on paper but 21 is not dynamic enough to carry a compelling narrative for this length of time. The lack of lyrical wizardry to balance the redundant content will enable longtime fans to appreciate the brevity of Savage Mode that much more. The closing track, “7 Min Freestyle,” only exacerbates this problem with 21’s simplistic bars running out of steam to end the LP.

Despite its flaws, Issa is a laudable effort from a promising talent that should inspire confidence in his career going forward. The budding star easily could have played it safe and stuck to a winning formula, which remains a strong suit (i.e. Issa’s “Bank Account” and “Close My Eyes”). Instead, he challenged himself to be more musically ambitious. While his experiments didn’t produce dynamic results, the positives overshadow the negatives. If 21 can grow as a studio visionary, he’ll prove a lot of doubters wrong. Issa inevitability.