Review: Young Buck Ruptures His Artistic Achilles With "10 Toes Down" 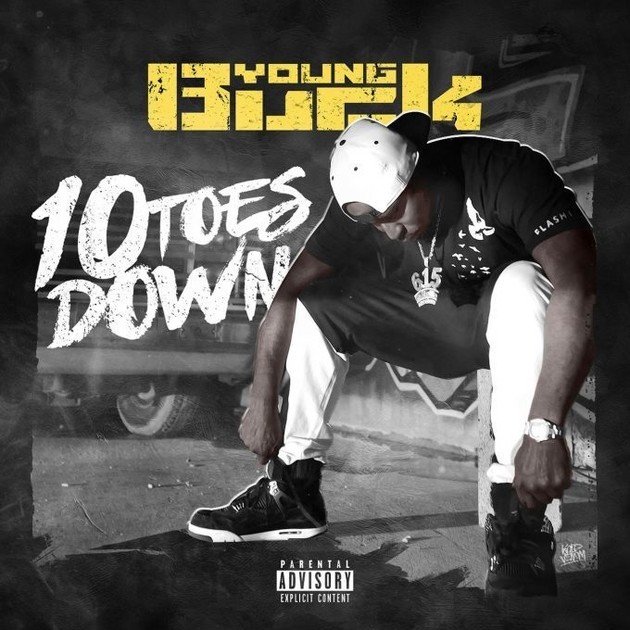 Young Buck drew the ire of social media for complaining about JAY-Z’s 4:44 overshadowing the release of his new album 10 Toes Down. While the negative reaction was understandable, there’s no denying that JAY’s critically acclaimed LP stole the thunder over every other rapper who dropped music on June 30.

As it turns out, JAY-Z actually did Buck a huge favor by making 10 Toes Down fly under the radar. The latest entry in the G-Unit member’s 10 series is not only subpar but also one of the most disappointing releases of Buck’s career.

10 Toes Down abandons much of Buck’s strengths as a rapper in an attempt to jump on the new wave. Over the course of 10 tracks, the Nashville native becomes consumed with trying to mimic what’s popular and strays away from the raw, hard-hitting rhymes that permeated his earlier work.

Half of the project features Buck “getting to the bag” while shouting “skrt” and relying on ad-libs in a misguided effort to compete with today’s hottest artists. The execution is severely lacking, as heard on songs like “200 MPH” and “Told “Y’all.” The production is incredibly bland too with unimaginative trap beats utilized throughout the project. “Up There,” in particular, sounds like it could literally be listed on YouTube as “generic trap beat.”

The flaws of Buck’s new style are perfectly encapsulated on “The Bag Way” featuring Moneybagg Yo. The veteran MC’s approach comes across like fitting a square peg into a round hole as a competent rapper tries to employ a formula that doesn’t suit his strengths. Buck’s weakness in this area is more apparent next to Yo, who is well-versed in the style being utilized.

Thankfully for longtime Buck supporters, 10 Toes Down is not completely devoid of quality. The title track is a strong opener with Buck’s aggressive attitude on full display. “In Her Feelings” displays solid imagery as Buck paints a vivid picture of a woman playing games with him. It’s just too bad the bright spots of the album are often undermined by their execution. “Relationships” is right in Buck’s wheelhouse, complete with a soulful beat and heartfelt content. But instead of pouring out his soul in a tightly written cut, Buck relies on pure emotion and repetition. Even the best track on the entire project, the Boosie Badazz-assisted “Amber Alert,” makes Buck come across as a guest on his own work. Boosie essentially takes a starring role, handling the chorus and opening verse. While Buck takes a backseat, he does shine with some quality bars (“In this Phantom with fullies, there’s no license to carry ’em/Just some niggas like to pop you, burn yo body, and bury ’em/Couple coupes with no roof, we ain’t going nowhere in ’em/But to pull up and shoot, besides this bitch ain’t got air in it”).

10 Toes Down is a completely forgettable release from Buck that makes the listener question what he’s trying to accomplish. The veteran rhymer is not going to attain a younger fan base by pandering to their sensibilities. Buck is a non-factor to such listeners, so the venture is futile. JAY-Z’s 4:44 took away the spotlight from 10 Toes Down and did so in a fashion that embraced aging in Hip Hop. Buck would be smart to take a page out of Hov’s book and accept his evolving role in the rap game. If not, he’ll simply be a talented MC trying to keep up with something that’s passed him by.