Review: Rick Ross Proves His Blueprint Is Teflon With "Rather You Than Me" 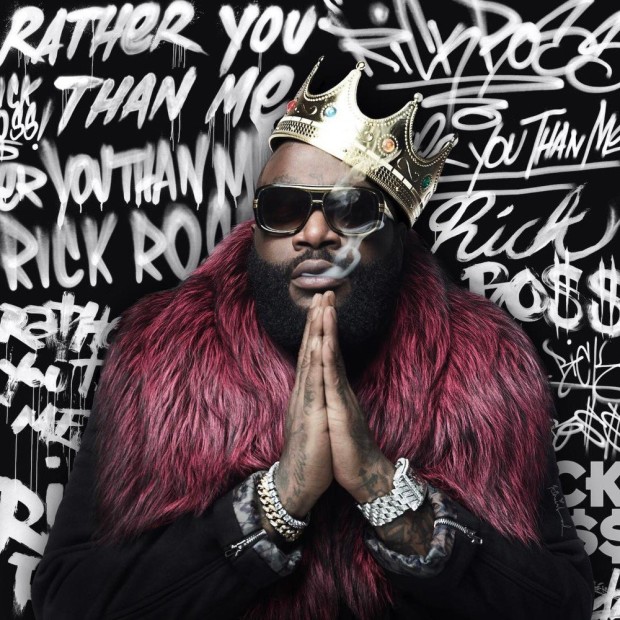 Nothing if not consistent, with Rather You Than Me Rick Ross shows little artistic growth while making a convincing argument for why he’s come to be ranked within today’s elite.

While most of Hip Hop’s leading figures have fused fantasy and reality for the past two decades, few have outperformed expectations and escaped falling off like one Rick Ross. Able to boast surviving 50 Cent’s once lethal mockery amongst his laundry list of accomplishments, his extensive string of releases showcase him as a womanizing, codeine-addled brute with pure intentions despite the criminal ties that exist outside of leading his Maybach Music Group regime. Glimpses of remorse and humanity in his songs aside, Ross has become engulfed in this frenetic lifestyle and its ongoing instability, given he performs for a culture endlessly intrigued by dysfunction. Rather You Than Me represents a new beginning with Epic Records and an extension of the groundwork he’s laid thus far.

Putting his trademark of starting songs with self-reflective spoken word to good use, “Apple of My Eye” opens with Rick Ross realizing lavishness pales in comparison to making his mother proud. R&B virtuoso Raphael Saadiq feels out of place here as a more subdued Rozay rattles off a number of concepts speaking to his complex identity: a predisposal to suffering seizures, having good friends amidst trespassers, the joys of promiscuity, killers on his payroll, visions of his funeral, a silver lining of Trump’s presidency and his advice for benefactor Meek Mill to be wary of former flame Nicki Minaj. Opting to keep a safe distance from his soldier’s personal affairs, Ross goes on to make it clear he actually has an axe to grind with the head operations at Cash Money Records.

As every A-list rapper aspires to reach Jay Z’s stature, with “Idols Become Rivals”, Rick Ross pays double homage: its title stems from Drake’s famed Michael Jordan/Allen Iverson analogy and the production rehashes Dynasty: Roc La Familia deep cut “Where Have You Been.” Continuing the theme of lashing out at a deadbeat father figure, Rap’s self-proclaimed biggest bawse takes menacing music executive Bryan “Baby” Williams to task for grievances not limited to fake jewelry, rented cars and most of all mishandling the careers and finances of those under his wing. Egged on by the comedic commentary of Chris Rock whose shtick lightens the mood here and on “Powers That Be”, the irony is our real life MC Gusto has never backed down or feared repercussion for his gangster talk. Standing up for personal comrades DJ Khaled and Lil Wayne in particular, Rick Ross goes so far as to compare Birdman’s corrupt publishing practices to a Catholic priest harming children, but the overall tone behind his sentiment is one of disappointment rather than the intention to disrespect.

Nonetheless, he continues poking fun on “Scientology”, noting “All my friends went to prison/Nothing like Bryan Williams, but when they come home I kiss ‘em” (not to mention, another jab taken in a now viral tweet to a stranger.) Without the aid of a hook, Renzel’s delivery builds to a crescendo over a majestic Bink! production as he ends offering Wayne a record deal with MMG. Unsurprisingly, the Virginia heavy hitter is behind all of the arguable highlights on Rather You Than Me; from the soulful “Santorini Greece” where Rozay refers to himself as “Michael Jackson to the rich niggas” and the cinematic jazzy “Game Ain’t Based on Sympathy” which contains perhaps the LP’s funniest and most offensive quip on conservative points of view: “A pretty chick, she resembles Stacey Dash/if it was her she’d have to kiss my feet and lick my ass.”

Depending on your vantage point, Rick Ross was either lazy or simply not fixing what wasn’t broken as he dabbled in familiar territory throughout Rather You Than Me’s less inspired songs. “Dead Presidents” is almost a literal repetition of highly acclaimed Teflon Don’s opener “I’m Not a Star” that can’t be saved by everyone’s favorite mindless drone Future, while “Trap Trap Trap” could double as a metaphor for being stuck running in place catering to fans mesmerized by the sound that former flash in the pan sensation Lex Luger perfected years ago. Guests don’t improve matters here as Young Thug’s appearance falls short of compelling and Wale’s linguistic approach is too advanced for what’s required. The most entertaining selection of dope boy karaoke comes by way of teaming up with Gucci Mane for “She on My Dick”, but this also fails to live up to the greater potential Rick Ross has to elevate his craft elsewhere on the album.

Having developed into a mogul who answers to no one, Rick Ross goes full throttle towards glory with the sense his reign could end at any given instance, whether due to his own vices or unnamed enemies he speaks of. Neither timeless nor immediately disposable, Rather You Than Me is an above average outing that displays why he’s steadily remained within the public eye without having a long line of record-breaking hits. Between his determination being set on proving naysayers wrong and leaving a strong legacy behind, Ross has once again proven he deserves consideration as one of Hip Hop’s all-time great orators.