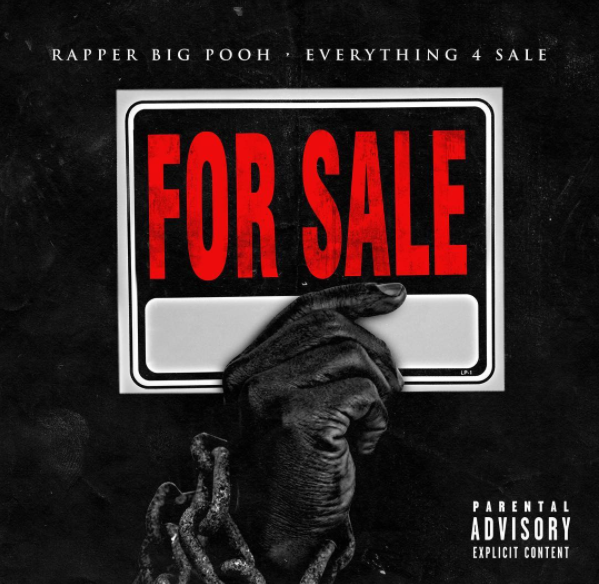 Over moody, organ-laden beats, Rapper Big Pooh pours his heart into every syllable he spits on his most recent EP, Everything 4 Sale. The seven-track offering, albeit brief, begs for repeated listens as the exercise of deciphering each witty bar becomes an apparent requirement for maximum listening pleasure.

While the Virginia native is well-seasoned due to his involvement with revered Hip Hop group Little Brother (alongside producer 9th Wonder and rhyming partner Phonte), he doesn’t rely on his status in the Hip Hop community to carry him. Instead, it quickly becomes apparent he has just as much love for the craft of rhyming (and the culture in general) as he did when he got his start nearly two decades ago.

Beginning with the aptly titled “Intro,” his breadth of experience is immediately recognizable as “Big Trouble Little Child” sets the tone for an album that oozes not only positivity, but also relatable tales of everyday life struggles, while the sheer number of subtly clever lines consistently illustrate his vast knowledge of the culture.

For example, on “Potpourri (Dead Flowers)” featuring Finian St. Omer II, he spits, “It’s time to bring da ruckus/Hammer dance/can’t touch us” before leading into the album highlight “Corner Store Blues” featuring Dho Hooker. “The allure/I don’t want to lose focus/just around the corner/I’m so curious/I want to see more,” the hook repeats as Pooh tells a story of being a self-made man, something he easily gets across with lines like, “No need to push me/I’m kinda close to the edge/leaning over this is life on the ledge/this is life for someone who’s never begged/I got two legs, two arms/never intended to do harm,” as he explains why he did what he had to do in order to survive as a kid.

As the EP enters its second half, one of the most brutally honest tracks in “Buyer’s Remorse” jumps out. The song recounts the first time he stepped on stage to perform and the feeling of utter loneliness he wrestled with as he failed to connect with his audience. “I never felt more alone ’til I penned a verse/and I had to spit it on stage/you can bring the hearse/zip the bodybag/place the toe tag/I’m trying to get it all by myself…I’m in pieces/please remember me/where’s the energy/me and the crowd staring/looking for the synergy,” a peek into his insecurities as an artist.

However, throughout the 20-minute project, themes of perseverance and authenticity continue to swirl as the traditional ’90s East Coast production, curated by DJ Flash, move it along, delivering a staunch reminder Hip Hop in its purest form is still alive and well despite the seemingly vacuous landscape mainstream rap often presents. But despite his best efforts, Rapper Big Pooh most likely won’t shift the public’s general interest to hardcore lyricism, but at least he’s trying.