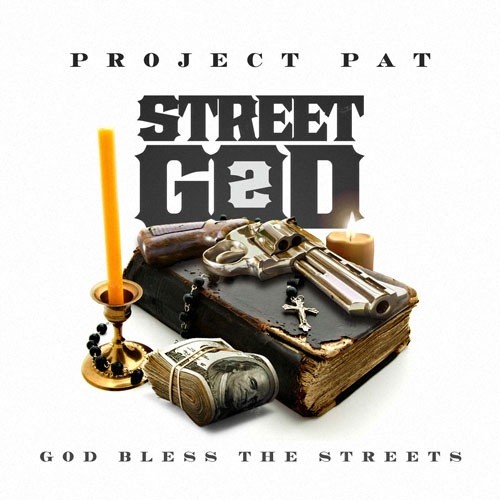 During the penultimate “Street Talk” interlude of Project Pat’s Street God 2, the longtime Three 6 Mafia affiliate uses the moment to give his contact information for show bookings, features and Facetime Fridays where he also offers general advice to get your life. Utilizing a mixtape track to advertise services so loosely makes sense for someone like Patrick Houston, who simply has nothing more to prove at this point. It’s all game to him. Though he never reached the second-wind career heights as his blood brother Juicy J, Project Pat could consider himself the most successful Hypnotize Minds artist not directly a part of Three 6 Mafia. For hardcore Southern Rap fans, Mista Don’t Play: Everythang’s Workin’ is a regional classic thanks to the La Chat featured “Chickenhead” and “Cheese and Dope” which went on to become a mixtape series in itself. Even J. Cole used an interpolation of “Don’t Save Her” for 2014 Forest Hill Drive single “No Role Modelz.” Too bad Street God 2 lacks the ratchet genius that made him a household name in Memphis Hip Hop.

Street God 2 simply lacks vibrancy as every track conceptually feels like a something to check off the trap rap checklist. This includes the dreaded no snitching policy (“Fuck Shit”), illegal hustles (“Pint Of Lean” and “Catching Juggs”), gunplay (“Triggers New”) and the occasional song for females ( “Dem Women” featuring Young Dolph and Tone Yates). Some of the more irrelevant shit talking club bangers provide some enjoyable moments through hollow instant gratification like “I’m Dat Nigga” and “Get Loose.” The later features a comical rhyme “Cause if you feeling salty, got something to run yo pressure up / My nigga that bitch a whore, it don’t matter how you dress her up.”

The staleness of Street God 2 is reflected sonically as well. Production from 808Mafia, Drumma Boy Fresh and Nard B among others feel like throwaways for bigger artists making significant noise in the controversial Hip Hop subgenre. Programmed keyboard melodies and 808 backed drum loops make up the entirety of the tape. Relative unknown Joeblowedaceo helps elevate, “Fa Da Low,” a fairly standard track that has Project Pat bragging about selling dope in 10th grade to his high school principal, football coach, lunch lady and teacher’s aid.

Project Pat still exists in a time where promethazine was more known as cough suppressant than a popular recreational drug, spinning rims were a status symbol and oversized Fubu jerseys mattered more than hard-to-pronounce Italian fashion brands. Those still stuck in that period might as well indulged his older material. Everyone else should find their hood blessing elsewhere.