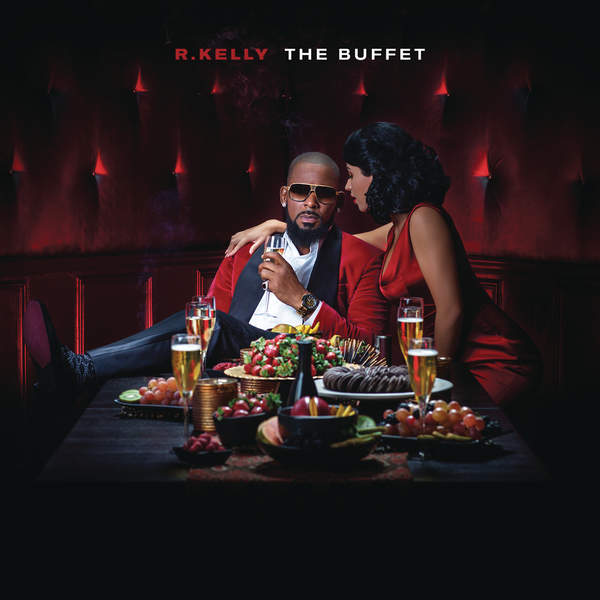 Go to any buffet-style restaurant in Everytown, USA and you’re bound to find whatever you enjoy eating in unlimited supply. Whether it’s seafood, vegetables, steak, ribs, chicken or ice cream, and cookies, no matter which food whets your appetite, the result will always be the same.

Over the years, R. Kelly has cooked up a lot of different music to sample. He started out in culinary school in the ‘90s with Public Announcement and graduated to his own kitchen with the success of his classic 12 Play, a freaky cookbook that contained recipes that still get used by established and aspiring chefs as well as musical food junkies. Since then, Kellz has collaborated with a who’s who of R&B, rap, pop and gospel masters while successfully walking the line between staying relevant and carrying the banner for the type of soul music your parents came up on.

So it goes without saying that Kelly has no problem pulling what he needs to create a great album. Although he goes all in to make each of the 13 tracks on his latest album The Buffet (18 on the deluxe version) a tasty treat with all of his ingredients, Kelly falls short with a chef’s worst nightmare: having a menu of items with different flavors that ultimately taste the same.

Setting the tone with a spoken word intro, Kellz brings an appetizer that gives the ladies a very vivid idea of the main course he will serve them (complete with slurping sounds) as well as the meal he plans to eat with them. Black Panties, Kelly’s 2013 NSFW opus, was the start. Two years later, The Buffet continues the singer’s return to 12 Play mode with heavy helpings of sex offered with various spices during the first half of the album. No shortage of mood-setting, baby-making music here.

The R&B Pied Piper’s knack for colorful sexual metaphors is found in every song on The Buffet, but stand out in “Poetic Sex” (“Get you wet like an aquarium,” “My sex is rich, them niggas is on a budget,”  “Marching Band” featuring Juicy J (“Booty so big got a nigga hearing trumpet,” “Beat it up like a snare drum”) and “Sextime” (“So damn good, I’ll declare this night a holiday”). Out of the three, “Marching Band” is the most memorable with its marching band comparison to the action going on in the bedroom. After hearing it, you wonder if there’s a college band bold enough to put this in their battle of the bands routine.

Like the other sex-themed tracks, Kelly’s lyrics aren’t that deep, but they bring a smile with an over the top vibe that’s entertaining enough for folks to picture testing some of these things out or, at least, referencing it in casual conversation with the object of their lust. In short, you know what you’re going to get when Kelly serves up the food he just took out of the oven or microwave.

For different delicacies to put on the plate, you can go back to the buffet for a well-done slab of mature tunes like “Wake Up Everybody” “Backyard Party and “Sufferin’,” which offer a refreshing alternative with that grown and sexy style Kelly perfected in past hits such as “Step in the Name of Love,” “Feeling Single” and anything else off the Write You Back and Love Letter albums.

While sex lingers throughout The Buffet, Kelly falls back with soulful cuisine in the form of ballads such as the Teddy Pendergrass-reminding “Get Out of Here,” which conjures up memories of Kelly’s hit “When a Woman Loves” in a good way and “Keep Searchin’,” a Kelly –produced romantic throwback with a sexual dash thrown in for good measure.

As for the assistant food makers, they do what is expected. Tinashe, while a joy to hear, doesn’t’ seem as engaging on “Let’s Be Real Now” with Kelly as they go back and forth with not being real enough to truthfully love each other. So much so that Kelly calls Tinashe an “actress” whose love is “a scene,” while she accuses him of messing with her and wants him to say what he means.

In addition, Nothing above the usual is found with Lil Wayne and Jeremiah (“Switch Up”), Ty Dolla $ign (“Anything Goes”) or Jhene Aiko, who does a sound taste tasting with Kellz while talking sex on “Let’s Make Some Noise.”

Outside of the vocals, Kelly does double duty with producing and co-producing the content for The Buffet, with collaborators like Dr. Luke, Donnie Lyle, Samuel Hines, Keyel Walker, and Maejor, who brings dancehall to the feast with the deluxe version Wiz Kid-assisted song “I Just Want to Thank You.”

With each tune, the beats put you in a different space with each tune. From eating at the cookout of “Backyard Party,” sitting at the table with a plate of homemade delights on “Sufferin’” or letting it all digest while thinking on soothing selections “I Tried” and deluxe version closer “Barely Breathing,” the music helps in dictating what food to indulge in to fully experience the feast at hand.

Overall, The Buffet is a satisfying dish. Those looking for new music to enjoy with someone special or throw on to step and chill to won’t be disappointed. The thing is…Kelly has so much talent that he’s set a very high bar to the top, even for him. Maybe it’s a matter of staying on the same plane with current music makers or just trying to keep his name in the mouths of those younger than the folks who have been in Kelly’s corner since day one. No matter the reason, good music is timeless and will always secure a place in the hearts of people who appreciate the quality.

In the end, it won’t prevent fans from getting their bellies full with tasty creations that hit the spot when the craving hits.