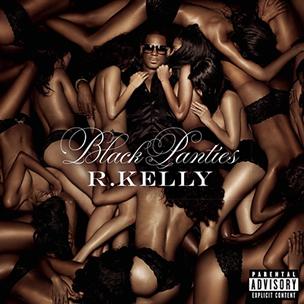 Over the course of a 22-year career, R. Kelly’s music has co-opted everything from contemporary R&B to Gospel, international music, Hip Hop and power ballads. And while it’s pretty safe to say Robert Sylvester Kelly is one of the few people to record with both Celine Dion and DJ Mustard, through the many phases of his career he’s never shied away from lewd subject matter. Album number 14 (excluding exports, reissues and two collaborative albums with Jay Z) is a raunchy return to baby-making music bathed in a veneer of club-friendly production.

Lyrically, Black Panties features some of R. Kelly’s least inspired writing since he started donning a Zorro mask during his “toot-toot, beep-beep” phase as the self-proclaimed “Pied Piper of R&B” circa 2004. “Cookie” is about as subtle as a sledgehammer blow, with Kelly offering to “bang on the pussy like I’m throwin’ up Crip,” while “Marry The Pussy” and “Show Ya Pussy” leave nothing to the imagination. On the latter, Migos employ the same cadence from “Versace,” while Juicy J is in “Bandz A Make Her Dance” mode, enamored with a stripper whose has an “ass thicker than a bowl of pudding” in a club with “more niggas than a cotton field.”

R. Kelly—arguably the greatest contemporary R&B artist to emerge in the last two decades—seemingly lowering himself to Auto-tuned strip club anthems is akin to LeBron James deciding to do a one off “And-1” mixtape. When he voices every character in the three-minute skit, “Prelude” preceding “Marry The Pussy” (where Kellz drops the magic P-word about 65 times), it continues Kelly’s tradition of self-aware joking…“trolling the masses,” if you will. All of which is even more perplexing, because, lyrical content aside, the music still sounds good.

From a technical perspective, Kellz is writing and delivering on a level that matches or surpasses the mainstream Rap you’d find on any Top 40 radio station. Explicit, Hip Hop-inspired crooners like Trey Songz, Ty Dolla $ign and Kelly’s labelmate Chris Brown should all be paying royalties. And Kelly’s decision to mimic them is a strange one. There’s no shortage of Rap-inspired cadences, occasional double-time deliveries and X-rated similes and metaphors. Kelly even dabbles in “Hashtag Rap” couplets, and just for good measure, there’s some guest appearances from Jeezy, Ludacris and 2 Chainz.

Historically, Soul singers have been metaphorically mining the pubic triangle for their subject matter in varying degrees long before and after the likes of Millie Jackson or Clarence Carter. Any and everything Kellz has done on or off the microphone since 12 Play makes any “clutch the pearls” moments both disingenuous and clichéd. But there are times when the debauchery reaches WorldStarHipHop or vintage 2 Live Crew levels of explicitness that detract from the overall musicality. The more restrained offerings, such as “Genius” and “All The Way” don’t stand out because they’re less explicit (they’re not), but because they feature Kelly challenging himself as a songwriter by offering pillow talk in a more clever fashion.

The combination of Kelly Rowland and R. Kelly cast as two unfaithful lovers singing, “There ain’t no such thing as a half mistake…you don’t know that you’re addicted until you relapse,” is reminiscent of 1995’s “Down Low.” Similarly, R. Kelly shines on the autobiographical “My Story” and “Shut Up,” which are two tracks that briefly step outside of the boudoir.

Ultimately, the legacy of having sold nearly 40 million albums while introducing phrases like “Bump N Grind” to the mainstream lexicon means R. Kelly can musically do whatever he wants. “Ignition” was proof he could turn nonsensical sound effects into a hit if that was his prerogative. As such, Black Panties finds his subject matter about as varied as the play-by-play of two dogs in heat. But what it lacks in lyrical depth it makes up for by being a catchy, entertaining and completely in the moment snapshot of the current turned up, hybrid of R&B and Rap for clubs and bedrooms.