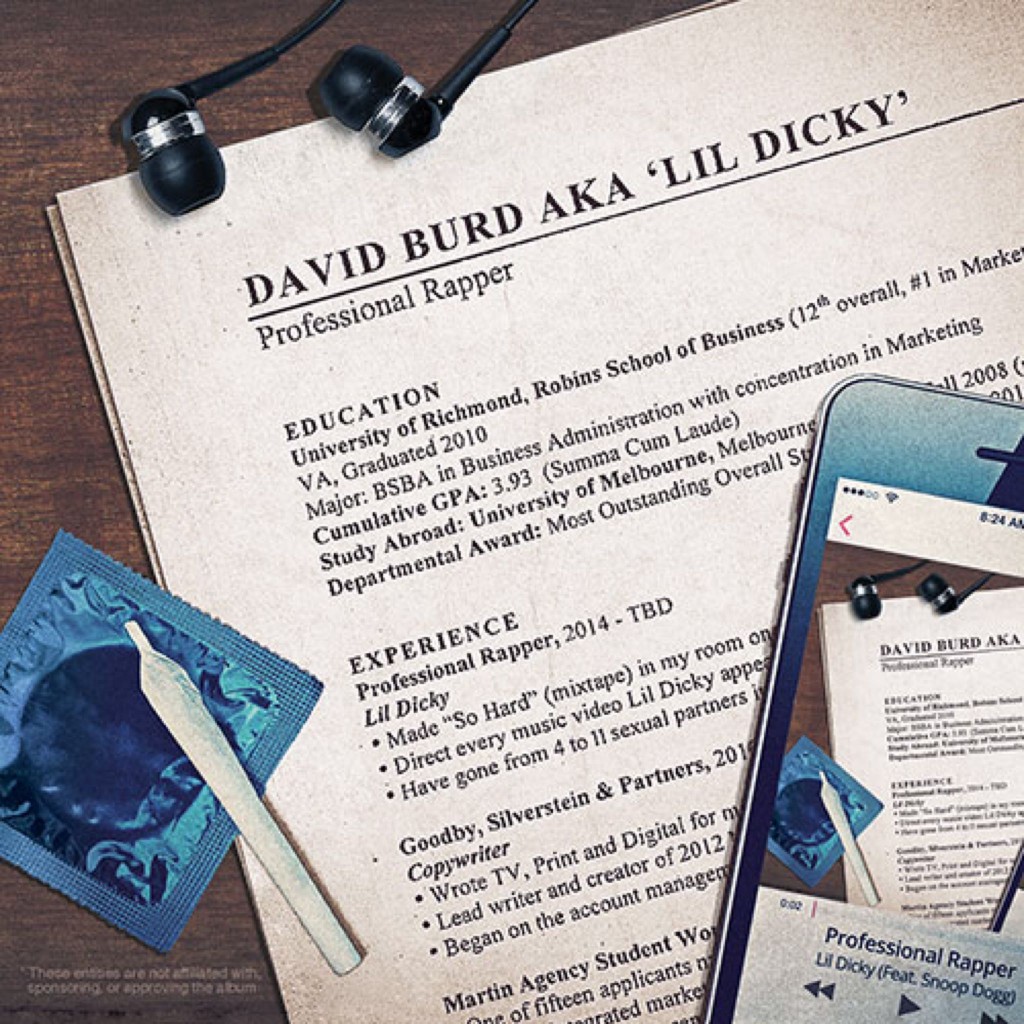 Despite increasing propensity, Caucasian manhood is a double-edged sword for aspiring emcees. On one hand, there’s a built-in audience driven to see themselves represented within the world’s coolest culture. On the flip, white rappers bare the brunt of skepticism and scorn mostly on the grounds of genetic makeup, a reverse discrimination of sorts from any number of judges.  It’s commonly accepted that The Beastie Boys handled their burden well and Vanilla Ice was a laughing stock. Since their heyday, the likes of Eminem, Mac Miller, Yung Lean, Spooky Black and Macklemore have faced accusations of tourism alongside their accolades. Lil Dicky is the latest spectacle to have his whiteness examined under Hip Hop’s ever so reactionary magnifying glass.

With the perfect combination of charm and pop sensibility, 2013 found Lil Dicky going viral as his video for “Ex-Boyfriend” (from his double-entendre laced introduction So Hard) hit a million views on YouTube in a day’s time. Deciding to sustain his newfound success via Kickstarter, the $113,000 raised in a month funded Professional Rapper, his first real step into the uncharted realms of a serious musical career. As a former advertising executive, it comes as no surprise he’s mastered business fundamentals, but the true challenge has been matching his visibility to people willing to take him seriously. Given, he’s placed comedy at the forefront of his routine. Thankfully, the album stays within familiar parameters while dually throwing a curveball that commands respect.

Professional Rapper opens with its title track, where Lil Dicky exchanges bars with none other than icon Snoop Dogg over a bumping trap beat, as he’s interviewed to be hired by a boss figure who questions his qualifications as an outsider. This display of creativity strays from convention, an immediate indication that he’s here to turn the game on its head. Perhaps a nod to good Kid, m.A.A.d city (a tale of shirking the ghetto’s trappings), the LP weaves in interludes of humorous phone conversations with Dicky’s aloof Jewish parents expressing their concerns for his life’s new direction. Setting himself up nicely in advance of this release, the videos for “Lemme Freak” and “Classic Male Pregame” proved he’s capable of adding complex methods of rhyming to otherwise mundane topic material.

Thus far Lil Dicky’s fandom has been leveled out by staunch opposition given his off-kilter sense of humor and penchant for uncomfortable honesty. Landing in hot water with his peers and an already wary audience, former hit “White Dude” was received horribly as he unashamedly admitted to his privileged position. Professional Rapper continues to take jabs at popular ideas with a fine blend of parody and frat humor. In a genre oversaturated with boasts of violence and drug trafficking, the clever “White Crime” has Dicky admitting to not so sinister deeds including sneaking snacks into the movies, jaywalking and leaving his iPod on during a flight’s takeoff. “$ave Dat Money” is another highlight, a DJ Mustard sounding ode to frugality, it features a hook from trap king Fetty Wap and a verse from Rich Homie Quan who manages to miss the point. In typical Dicky fashion, he cuts Quan short noting how expensive a full 16 bar feature would have cost, proceeding to drop punchlines about being cheap like “I ain’t never hit a bar with a cover/Low thread count, hard with the covers.”

Slapstick makes it easy to overlook his material, but quietly, Lil Dicky is as technically skilled as anyone actively pursuing respect for rapping. The best examples that showcase his gift are “Bruh” where he brag talks over percussion for four minutes straight, and “The Antagonist” where he explains his contradictions to the world while standing up for himself. Here he says “All my favorite rap is not amusing /And I love my funny stuff, I hope it’s not confusing”, doubling down with “The irony in all of this is I been funny rapping/Yet the youngin’s snapping, to the point where all of yall look funny rapping.” The album ends with “Truman,” his take on long-winded introspective outros such as Kanye West’s “Last Call” and J. Cole’s “Note To Self.”

With his official debut under his belt, Lil Dicky gets ahead on the merits of wit, originality and endless ambition. Trusting his gut, he tows the line between calculated hits and breaking new ground while taking rap far more serious than a first glance may suggest. In love with his craft, his major flaw is perhaps he’s too smart for his own good. The most glaring case of this quirk is “Pillow Talk,” where he cracks jokes, asks existential questions, covers animal rights and raps from the perspective of an inner monologue for nearly eleven minutes, proof that brevity isn’t always his strong suit. The most apt summary of his character comes by way of “Who Knew” where he uses “Breaking Bad” references to describe himself: “Hip Hop Heisenberg/The young boy got dope for a quiet nerd/Rap game Walter White/You might get killed thinking that he’s all polite.”  Never afraid to stand out while lampooning those who fit in, Lil Dicky wins over close listeners and anyone who identifies with his shtick, while remaining a difficult concept for the closed-minded to grasp.