CZARFACE – Every Hero Needs a Villain 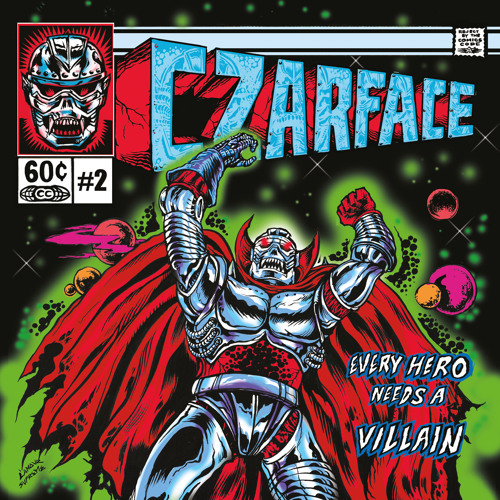 Two years ago, fans got a pleasant surprise in the first CZARFACE album. Wu-Tang Clan’s Inspectah Deck and Boston duo 7L & Esoteric joined forces to create what became some of the most exceptional work in their respective careers. It seemed that working with each other brought out the best in both sides as Deck delivered his finest performance in over a decade while 7L & Esoteric got back to hardcore, boom bap raps that helped the duo stand out in the early 2000s. Now, the trio returns with their new album Every Hero Needs a Villain looking to recapture the magic of their first collaboration.

Every Hero Needs a Villain doesn’t look to reinvent the wheel or deviate from what worked on the group’s debut. The sequel covers much of the same ground as the first album as it’s filled with tons of pop culture references and samples. Comic books, television shows, movies, professional wrestling and rap legends are heavily entwined in the rhymes of Deck and Esoteric as well as the samples of DJ 7L.

Once again, Inspectah Deck and Esoteric are in top form. You won’t find these two delivering any social commentary or recounting some gut wrenching stories of their past. This album is pure fun as Deck and Esoteric focus on battle raps and creative wordplay. Their pen game is sharp and the guests only add to that experience.

“Lumberjack Match” is an early standout which highlights the chemistry between Inspectah Deck and Esoteric as they trade bars throughout the track. Deck drops slick rhymes like, “The flow universal, I’m Doctor Who / Soul seeker, I goes deeper than Popa Wu / 100 thou going wild at the Bonnaroo / Wu-Tang forever, you just stopping through.”

Esoteric responds with his own: “Y’all don’t want any of this, score without any assist / Sound boogie down like the brothers Kenny and Kris / Get a better serve, your dream has been deferred / That ain’t God’s path, you’re a pathetic herb.”

CZARFACE also makes some excellent choices when it comes to the guest appearances on this album. Whether it’s East Coast stalwarts like Large Professor and JuJu of the Beatnuts or underground favorites like DOOM and R.A. the Rugged Man, every guest meshes well with the dynamic the group has created.

The Wu-Tang Clan is represented as well as Inspectah Deck’s fellow members Method Man and GZA also appear and truly shine in their respective contributions. GZA, in particular, unleashes a show stealing verse on “When Gods Go Mad.” GZA raps: “A wild dog bit the extended hand / Exposed the secret world of a tormented man, damn / In this world, loose tongues are cut with razors / Something major, inside the darkest corners of twisted behavior.”

While Inspectah Deck and Esoteric are the proverbial stars in this superhero movie of an album, DJ 7L is the director via his work behind the boards. With some help from SPADA4, 7L produces this entire album and helps develop a story on an album that’s by no means a concept album. His sample selection and transitions from track to track create the world where CZARFACE exists.

7L isn’t making generic, stuck in the ‘90s boom-bap beats either. Sure, that classic sound is an inspiration for him, but he finds ways to rework that formula on Every Hero Needs a Villain. He’s not relying on a beat loop then adding some hard knocking drums to it. 7L utilizes cuts, throws in unexpected vocal samples and crafts beats that will have you nodding your head the entire time. 7L also makes heavy use of guitar throughout the album and employs multiple switches on single tracks, most notably on “Escape from Czarkham Asylum.”

Every Hero Needs a Villain is one of the rare sequels that matches the original in quality. The chemistry built on the first CZARFACE album carries over seamlessly to their second effort as Inspectah Deck, 7L & Esoteric seem tailor made to work with one another. 7L’s underrated production shines and perfectly complements the styles of Deck and Esoteric. CZARFACE may know their playing to a niche audience who desires a return to glory days of the ‘90s, but the execution is where CZARFACE differs from most nostalgic acts. The trio deftly finds a way to recapture that feeling without rehashing stale concepts, even if they’re not breaking any new ground. Every Hero Needs a Villain is simply an enjoyable listening experience that any longtime Hip Hop fan is sure to appreciate.