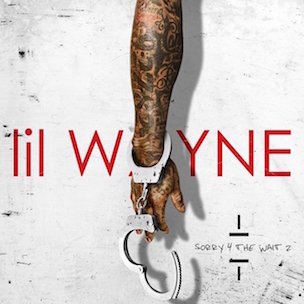 Lil Wayne fans have been in this position before. In July of 2011, the prolific rapper dropped Sorry 4 The Wait, an apology of sorts for the numerous delays of his ninth studio album Tha Carter IV. On that tape, Weezy flew off into rap tangents on various popular songs at the time. Nearly four years later, listeners are having déjà vu. But this series of pushbacks for his double-disc Tha Carter V has Wayne fed up. After publicly revealing on Twitter that he wants nothing to do with Cash Money anymore, the 32-year-old emcee is doing everything in his power to remove the preverbal CMB chains on his creativity. The answer is Sorry 4 The Wait 2, released this week, that finds him trying to show he’s still the best at what he does: rapping. Although they’re some bright sparks of creativity that remind us of his formidable days, Weezy’s lazy punchlines, tired subject matter, and poor attempts at song remakes is an uneasy indicator that Tha Carter V might not be worth the wait after all.

It’s a known fact that Tunechi has built most of his considerable name and reputation off of mixtapes. From 2006 to 2007 his tapes Dedication 2 and Da Drought 3 were events in Rap, and Wayne ran a clinic on other rappers by taking their songs, remixing them, and making them unrecognizably better. His relentless output earned him the nickname Mixtape Weezy; however, it’s become noticeable that he’s lost the brilliance we used to be in awe of throughout the years. This character is different than Guest Feature Weezy or Album Weezy, where his performances on 2014 bangers “Loyal,” “My Nigga” and “Believe Me” shut down any talk that he fell off. Even his other promotional singles for CV—“Krazy,” “Grindin’” and “Gotti”—displayed shades of the 2006 Lil Wayne that was damn near untouchable. On S4TW2, he attempts to stick to his bulletproof method of stream of consciousness rhymes over 2014s most inescapable tracks, often blacking out behind the mic to spew some fire rhymes: “I can’t swim, but I’m throwing pool parties” (“Trap House”); “Got the yay locked down like Kim K” (“Selsun Blue”); “Tunechi in this bitch I’m tighter than a pinched nerve” (“Fingers Hurting”). The tape definitely has its share of memorable lines, but the problem lies in the fact that there are far more misses than hits.

In retrospect, S4TW2 is better suited as a keyhole view of the turmoil within Cash Money. Just about every track here has either a subliminal or direct shot at his father/mentor/label CEO Birdman. There’s speculation as to whether their tension is actually serious or if this is all a ploy to recreate anticipation for Tha Carter V. Whatever the case may be, Weezy doesn’t hold anything back on opener “Coco,” rehashing OT Genasis’ viral hit into a public service announcement of what he’s going through. “Cash Money is an army, I’m a one-man army/And if them niggas coming for me, I’m going out like Tony,” he declares. “I ain’t trippin’, I got Barbie, I got Drake too,” he claims later. The Young Money boss continues the jabs on OG Maco’s “You Guessed It:” “I couldn’t be Jr. forever I don’t mean to ruffle your feathers/But I had to spread my wings, ain’t trying to get lemon peppered.” If he didn’t take it far enough, Wayne puts the nail in the coffin on “Hot Nigga:” “Yeah, got me on my Young Money shit/No Cash Money just Young Money shit!”

What will disappoint Wayne fans on S4TW2 is his predictable beat selection. Back then, when he was exploding on Jay Z songs to prove he’s the “best rapper alive since the best rapper retired,” there was an insatiable hunger to make his now artistic comparisons to only Kanye West and Beyoncé valid. Now, it’s exhausting to hear Wayne rap over another Atlanta beatmaker’s hit or a Meek Mill single without giving us a better reason to just replay the original. It was once a clever technique of his to borrow lines from rappers and to hear him really take off in pocket with his own flow. Also, when you have songs like “HollyWeezy” and “Admit It” that are vaguely similar to Drake’s song structure, it’s a concern that Wayne might be losing his edge.

The most talked about songs since the tape’s release have been from his guest features Drake and 2 Chainz. Wayne sounds competitively focused and revitalized when he’s bouncing verses with and off of them. It’s a hint that he might be running thin on creativity and is using his peers to re-energize him. With that said, the final track “Dreams & Nightmares” addresses this with a poise only a rap veteran could pull off: “Y’all ask me to spit now I’m drooling on my chain/What happened to Wayne?/I’m like ‘hold up wait a second’/Y’all that I was second?/Hatin’ on a champ, throwing salt on that confetti.” Even if there’s more doubters on Wayne’s comeback after this tape, when he’s backed in a corner you can guarantee he’s coming out swinging.