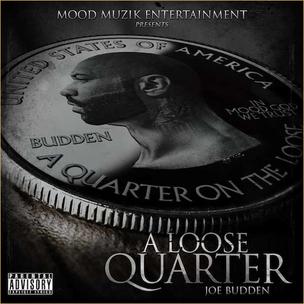 A long time ago, Joe Budden used to make punchline raps and party anthems tailor made for radio and mixtapes. He still makes punchline raps and party anthems, but the majority of his music is personal, and very much emo. This was hardly a secret once the NJ representative released a whole series called Mood Muzik (spanning 4 and a half mixtapes at that). A Loose Quarter doesn’t have mood in the title, but there’s plenty of introspection and making the song cry a la Jay-Z. But with over a decade of experience under his belt, fans and critics alike want to know if he’s found the right balance.

After a choir-and-string-fueled intro, Budden whisks away the harmonics with the help of AraabMUZIK on “Words Of a Chameleon.” It’s a shameless song with Budden conjuring up visions of aborted babies, rape victims who never found justice, and gruesome events such as Tupac at the Quad Studio elevators (where the unfortunate shooting took place), all to elevate his bars. It’s also the reason why he’s a rapper’s rapper that may go unappreciated by the average fan and excite the best in the game, like his employer, Eminem. But aside from a lyrical sparring session with TDE’s Ab-Soul (which is great, by the way), the spitter steps aside for “letters to my diary” Joe.

Getting the mellow emcee is hardly a bad thing though. It’s a large part of why Joe stays relevant and his fans stay loyal. On A Loose Quarter, it’s as personal as it ever gets. He’s so comfortable with sharing so much of his life with fans, at this point, it’s like they’re not even there anymore. He’s talking to his parents (“Momma Said”), his ex (“Off 2 The Races”), his girl (“So Good”), his girl (“So Hard”), and his girl again (“More Of Me”). It’s not much more you could ask for as a fan, as he shares more than his fam are probably comfortable with.

But if you aren’t a fan of Joe and you aren’t familiar with his story, and you don’t follow him on Instagram and Twitter, it can get overwhelming. It’s uncomfortable critiquing an artist’s personal letters like “Momma Said.” However, when the hook sounds off-key even with Auto-Tune – and it unravels like the “he said she said” verses on R Kelly’s Trapped in the Closet – you’re forced to wonder if he could’ve stepped out of the booth and just made the phone call to his moms. Replay value will also suffer when the rhymes are so straightforward and kept at face value. But there’s that catch 22. You don’t want to be the hyper-lyrical metaphorical guy when speaking from the heart on real issues. That’s mostly for the youngsters who have never been through anything, and can’t see past having the illest bars. That being said, when there are moments like “All In My Head” where he and fellow Slaughterhouse member Royce Da 5’9 capture that struggle of addiction so succinctly and tracks like “More Of Me” that stretch to seven minutes and still leave you wanting to hear more, it’s no excuse.

Joe Budden plays his part on the Slaughterhouse album, but A Loose Quarter allows him to really flex his artistry. That’s a great thing or just a cool thing depending on how much of a fan you are. But the kind of honesty and open soul-searching shouldn’t be taken for granted, especially in a genre that doesn’t usually celebrate growth past the obligatory conscious record.

Listen to A Loose Quarter by Joe Budden