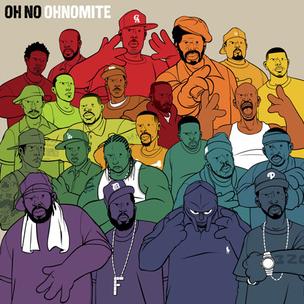 While Oh No hasn’t released a solo project in over two years, by no means has he been abandoning his craft behind the sound board. Instead, he’s quickly whipped up an impressive catalog alongside The Alchemist as Gangrene, and with it has come a new phase for the Oxnard, California producer/rapper. Returning to his dolo roots, Oh No tackles OhNoMite, an album that gives an admiring nod to blaxploitation character Dolemite.

As would be expected, there’s no shortage of gutter talk when Oh No is in his element. In appropriate fashion, lyrical heaters like “Time” and “Whoop Ass” (“Lost weight in the game / Got it back like Oprah”) capitalize on the raw, uncut production. Oh No covers familial territory too as Alchemist and Roc Marciano corral a verse each on records that would fit nicely into the lineage of Greneberg’s recent ascent. Switching to a more laid back tone, “Dues & Don’ts” features words of wisdom for the obtuse from Phife Dawg (“Don’t let a coward be a person that you follow / Don’t let them say you ain’t a leader of tomorrow / Don’t be a biter, real emcees should never borrow / Don’t be a Twitter thug, Hip Hop-wise, that’s a no-no”).

Whereas Oh No’s previous solo releases followed through on a specific theme, OhNoMite plays more like a compilation of records. As stated earlier, this varietal approach yields a handful of exemplary results, however this also leaves the album open for error, namely on the lyrical side. One would have trouble finding holes in MF DOOM’s verse for “3 Dollars.” As Oh No jumps in afterward, he’s able to match this same intensity in delivery, but the actual performance pales in comparison. Then on “Touch It” with Detroit veteran Frank Nitt, staggering horns push the two rappers through a song of sexual innuendos as they attempt to jack Dolemite’s swagger. “You Don’t Know Me” is the type of record that will immediately elicit the scrunch face head nod; the same can’t be said for Rapper Big Pooh and Phil Da Agony’s verses. And though they simply act as interludes, tracks like “Piano” and “Ohnomite Jazz” make you miss the prestige of ‘Dr. No.’

A valiant effort, no doubt, one shouldn’t go into a listening session with OhNoMite expecting an impassioned ode to Rudy Ray Moore. It’s an album that highlights Oh No’s production skills, with the ghost of Dolemite playing a diminutive role. In that regard, Oh No’s execution is slightly off the mark in sticking to its motif, but that shouldn’t detract from the goods he’s brought this time around. We can dig it.