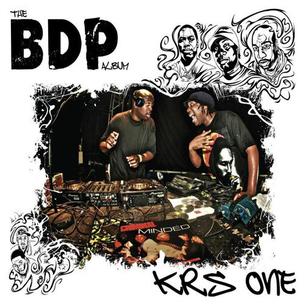 Besides Scott La Rock, one of KRS-One’s most consistent musical partners since Boogie Down Productions, is brother DJ Kenny Parker. Although Kenny’s productions with Kris were not his most recognizable hits, the deejay was an active presence on later solo albums, as well as BDP’s Live Hardcore Worldwide, a benchmark recording for live Rap LPs. While the brothers have worked off and on over the last 20-plus years, Kenny Parker produced for Heather B, Mad Lion and Lady of Rage, while Kris dabbled with the likes of DJ Premier, Showbiz and Da Beatminerz. In early 2012, the Brothers Parker kept an entire project in the family and restored the names of one Hip Hop’s most legendary crews with The BDP Album.

“Times Up” feels like a present-day Boogie Down Productions statement should. Kris cries foul about Serato-schooled deejays, changes in fashion and emcees with a weak live show. Joined by “Step Into A World” producer Jesse West, the song still has that feeling of being improvised in the studio, but with a succinct message. The synth sample is altered to channel the late ’70s with a present day feel. A less freestyle-sounding track is “2012,” where The Teacha breaks out the chalkboard to tackle the topic of the Mayan calendar with the insight that influenced legions of booksmart emcees since the late ’80s. If anything here feels made on the spot, it’s Kenny’s drum-kit, which carries the feel of a jazzy Spoken Word canvas. “Forever,” featuring KRS-One’s mid-’90s proteges Channel Live makes a convincing statement as to why the voice of B.D.P. has never stopped for over 25 years, speaking about the culture he helped maintain. Kenny Parker offers Kris a nice loop, making a song that sounds as if it could have been started 15 years ago, with contemporary commentary.

Musically, DJ Kenny Parker provides the hard-hitting drums that both he and has brother are known for. The compositions fall into the boom-bap category, but less for the stage as much as for the headphones – a diversion from most KRS-One releases of the last 10 years. With a prominent deejay career, it’s surprising that more mixmaster elements aren’t heard, such as scratching or fading, though Kenny shows his lengthy tenure in the industry with a range of tempos and his moods in his music. Interestingly enough the “What It Is” outro is where Kenny’s ear shines, a track that blends singing with a simple chord riff. This grooves, and still feels like a song underneath KRS’ shout-outs. Although The BDP Album might not be KRS-One’s catchiest album in years, it’s a worthy work to wave the flag of the trailblazing South Bronx clique.

With recent projects with Showbiz, Bumpy Knuckles and Just-Ice, KRS-One is one of the few 1980s alumni not afraid of keeping his catalog close to its core. The emcee has always taken a cyclical path, and finds himself defending Hip Hop and educating listeners with its tenants. The BDP Album earns its name in KRS keeping the musical manifesto alive, and has more in common with the five years of magic between 1987 and 1992 lyrically than you’ll hear in the musical half. No matter who he’s working with, KRS-One continues to grow comfortable as a living legend with a pure cause.