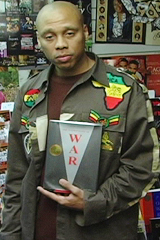 Channel Live: The Livest One

Anybody believing that underground Hip Hop is a bore, wasn’t around in 1995. Whether Group Home, Smif N’ Wessun or New Jersey duo Channel Live, underground Hip Hop was something that just had to bumrush radio and video with its Timberland boots and pro-black teaching. The last of the aforementioned three, Channel Live, used its KRS-One-assisted smoker’s anthem “Mad Ism” to push the line of consciousness at a time when the term wasn’t often used.

Along with Tuffy, Hakim Green was the voice of Channel Live. Despite achieving gold status with Capitol Records 12 years ago, a long hiatus pushed the group into independent releases, now finding Hakim carrying the group’s name through his solo releases. Having stayed aligned with KRS-One all these years, Hakim is now a chair of the Stop The Violence Movement, and a frequent speaker and face among the preservation of Hip Hip in New York, New Jersey and Pennsylvania.

Underground Hip Hop, with Channel Live anyway, still finds a way to be anything but boring. With his album A Revolution Televised in tow, Hakim Green boldly comments on the state of Hip Hop, through strong words for Diddy, Mase and even Jay-Z, whom he calls a slave. Some may argue this is blasphemy in the face of the commercial age. However, others might contest that Hakim is right, and validated to criticize the leaders of his own generation. In any event, the culture can decide as one of its most edgy voices explains a 12 year journey through constant elevation.

HipHopDX: How did Channel Live come to be?

Hakim Green: Channel Live came to be because of a drive to be in the limelight and do something positive at the same time. The rap game and Hip Hop in general, is a competitive thing. There