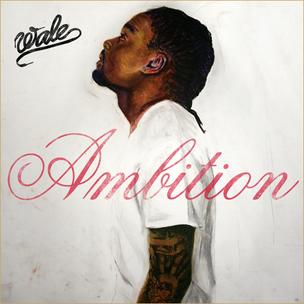 Wale’s sophomore album Ambition could best be characterized by the line, “GQ ‘Man Of The Year’ / Cudi, Drizzy and me / Went away for a lil’ / Let my wisdom increase.”

Yes, there was a time when all three of these rising stars were considered equals. However, Wale’s musical journey since that GQ issue hasn’t been as clear cut and fruitful. Now though, he is an integral centerpiece of a respective crew in Maybach Music Group, a similar occurrence for his perceived counterparts (Cudi and G.O.O.D. Music, Drake and Young Money/Cash Money). Equally important, Ambition is not Wale’s attempt at gauging his success by his competitors. Rather, he has carved out his own lane, with the music proving to be just as ambitious.

Wale comfortably positions himself as “Maybach’s poetic genius” with a swift tongue for metaphors and a cadence that ingrains itself into the accompanying beat. Whether he’s flaunting his new piece on “Chain Music”

(“They say karats help your vision / But somehow it made them listen”) or lyrically bruising tracks like “Double M Genius” (“A modern day Goodfella, I’m Ray Liotta / Loud smoking so pass the L like a semicolon”) and “Legendary,” Wale’s sharpened delivery adds an intensity to every syllable that fittingly matches the album’s namesake. His first verse on the latter record corresponds:

“Only fear is mediocrity / So every time I got a beat I feel like I don’t got to sleep / Keep praying on your break, I hope you got a sling / Shot for all them shots coming out them beaks / I’m sort of like Socrates in a Prada tee / You can’t kick it, your pockets thinner than soccer teams / People fuckin’ with me, they ain’t fuckin’ with you / Lyrically top hmm, being generous too.”

provided by Lex Luger), production for Ambition displays no repeats from Attention Deficit or any of the hooligan-approved beat makers found on Self Made Vol. 1. Instead, Wale summons a new eclectic cast that captures a different shade of Ralph Folarin. As he teams up with friend-then-foe-now-friend Kid Cudi on “Focused,”

that will immediately garner the most attention. Blending Hip Hop, House and baile Funk into the mix for good measure, the outstanding execution behind the record carry Wale’s and Big Sean’s verses to uncharted territory. As with Hip Hop’s ever-growing and loosening attitude, this style of music should become warmly accepted in small doses.

Wale keeps the mistakes in check throughout Ambition, with his Achilles heel of female (read: commercial-friendly) records surprisingly coming out smoother than in the past. The best example comes in the form of “Sabotage,” an engaging track describing the ups and downs of finding a serious partner. Backed by a full live band sound and Lloyd’s  appropriate wailing, “Sabotage” is arguably one of the more polished R&B records to come out this year. “Lotus Flower Bomb”

takes a more intimate path, with Wale’s urging words of lust convincingly shedding any notion of his previous ‘backpack rapper’ position. Things don’t turn out so well for “Illest B****” however, where uneven production from The Bizness clashes with Wale’s staccato delivery. In the process, Wale’s sentimental words of encouragement lose interest. The laid back vibe of “White Linen (Coolin)” fares better, yet his wordplay here is decent at best (“Pimp stroll on em’, the pen cold on em’ / Couldn’t fuck with it with a million nymphos on ya”).

With a tight-knit collection of features and palpable confidence exuded in his lyrics, Ambition is Wale’s most cohesive and likewise enthralling project thus far in his brisk career. As such, the magnitude of this album rests in the hook of the title-track. Wale doesn’t expect every fan to symbolize their appreciation with a SoundScan; just don’t hold your applause.