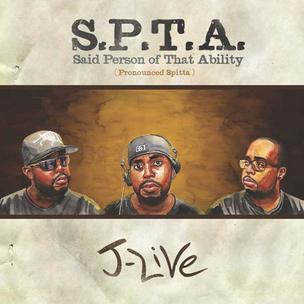 J-Live has always been an emcee’s emcee. His dedication to his craft – to educate through it and to deliver consistent dope material – has allowed him to amass a cult like following. On S.P.T.A. he proves that he can be a deejays deejay and a producer’s producer as well. He builds on a strong catalogue with the help of producers Diamond D, RJD2, Nicolay, and Marco Polo. It’s a scary good line up of beat makers, and J-Live demonstrates that his own skills behind the boards are just as potent.

J-Live lives up to the expectations and from track 1 to 13 it’s about as pure and organic as an album can get. “The Authentic”

is clearly a stand out that features Marco Polo production and J-Live spitting some of his best lyrics. He’s clever enough to rework every crack simile by spitting, “Yo your shit is crack/ in so much as that I never fucked with it and never will/ Never used, Never deal/ Never chopped, never cooked/ and I really don’t feel the appeal/ How he get a record deal, for real?” He’s one of the few emcees that can create a back and forth with nobody else on the track and have it sound natural. It’s always smart and witty, but throughout S.P.T.A. it’s incredibly dope too.

Just as the cover art depicts, J-Live wears three hats throughout the project. He’s Hip-Hop’s rare triple threat (DJ, Producer, and Emcee). Throughout S.P.T.A. he does each craft at a high level. The way he scratches up a hook (See “From Scratch”) is as skilled as the way he manipulates the English language to rhyme in the manner he does (See “Poetry In Ertia”). On the J-Live produced  “Life Comes in Threes,” he proves that his production can carry a track without an emcee. Like previous J-Live projects, the album is filled with positivity. He’s able to spit about Doc Holladay, the ills of drugs, and education without alienating his base. What it does lack is the intensity of “Stir of the Echoes” or the sincere depth that “The 4th Third” brought to All of the Above. S.P.T.A. has moments of its own, but they aren’t diverse enough to catapult the album into the next stratosphere.

The beauty of S.P.T.A. is J-Lives’ ability to deliver a relevant throwback album. It has an early ’90s feel with modern lyricism.  Fully equipped with cut up hooks, soulful samples flipped creatively and conscience lyrics, it has the feeling of what ’90s Hip-Hop looks like when it’s all grown up. J-Live avoids the guest filled “who’s who” album and instead keeps the audience guessing what exactly he is going to bring to the table next. By the end, he proves that he is a Master of the Ceremony in every regard.