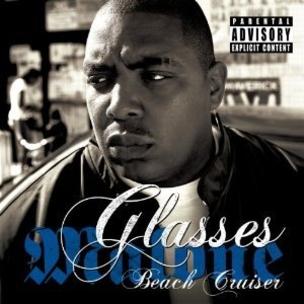 In the tradition of these legendary Rap stars hailing from the West, Glasses Malone spits about a gangster lifestyle over hard-hitting beats. Though not near the stratosphere of any of those greats, his content comes from the same Killer-California mentality that took N.W.A. out of the Compton streets, ripping through posters, to show mainstream America how they could express themselves, to their fullest capabilities. In 2011’s Beach Cruiser, Malone seems like more of a throwback than a new jack, more of a memory than the future, but he bangs.

Banging, of course, can mean several things. For Malone, this means gang banging, representing the “Blu Division,” as Snoop calls it on “Eastsidin’.”

Not simply trying to ride his beach cruiser through the Cali traffic, Snoop’s “nephew” then takes “A-Town drums” over on the Akon-led “Certified” to show his tracks can bang also, this time referring to the thump of the DJ Toomp produced track. The Cataracs also provide this with the infectious “I Get Doe,”

before things settle back down to a laid back G-stroll on “Car Wash,” a track dedicated to the constant reminder of death and unity that exists when family members and friends create car wash fundraisers for the dead. Speaking of the dead, Malone dedicates a cut to deceased musical icons on the touching “Club Heaven” where he pictures The Notorious B.I.G. and Tupac Shakur co-headlining in the afterlife. As the album ends, Terrace Martin provides more of the necessary thump on “Feel Good Muzik,” an Oldies-inspired cut perfect for riding the beach cruiser home as the ever-present California Sun sets, a suiting and soothing end to a hard, heavy album.

It’s not like there aren’t bumps on the road. For some fans, the first may be Malone’s voice, one that sounds eerily familiar to Game’s. The next bump comes in the form of content and message. While some may enjoy the soundtrack to the streets (“Dope,”

“Off Safety” “No Sympathy”

), others may find it monotonous and uninspired, at times. This message is also one that lies in the hearts of many in the streets, a mixture of emotions that contradict one another. While “Club Heaven” laments the loss of legends, many of the album’s other cuts show there’s no hesitation to shoot others. This type of mixture makes for a lack of cohesion that will stand out to listeners in search for more introspection. Moreover, some tracks could have helped the album by not being on it, including the odd homage to T.I. titled “Call Me T.I.”

There’s also a pothole hit by the timing of the album, which was originally started around 2006-2007. While some music stands the test of time, it’s hard not to notice when it doesn’t, particular when rhyme references no longer apply. The bumps along the way take away from the overall album, but it’s not all lost.

Malone has a long way to go to stand next to legends in the West, but Beach Cruiser shows Malone’s ride isn’t over. With unpolished rhymes, a gutter flow and street-centered approach, it’ll be interesting to see what he does when label woes don’t interfere with his path.