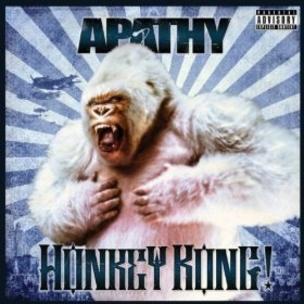 In early 2011, Apathy had a Twitter rant that chastised the state of rap. He didn’t say anything new—frets about the commercial music outnumbering the sincerity, artists being soft and emo instead of the hardnosed demeanors from yesteryear—but to some, it was refreshing to see an artist speaking his mind without fears of industry repercussions. With his third album, Honkey Kong (listen to the teaser

), the Connecticut emcee backs up his tweets by crafting music that harkens back to the rap that he fell in love with years ago.

As a member of Demigodz, Get Busy Committee, and Army of the Pharaohs, Apathy has reminders of raw Hip Hop around him on a daily basis. He continues to keep similarly-minded company around him on Honkey Kong, and while his legendary compatriots do their jobs, Apathy proves his understanding of their era with his own performance. He and Celph Titled trade barbarianisms over DJ Premier’s brawny guitar riffs and snares on “Stop What Ya Doin,”

he deftly maneuvers Muggs’ punchy string plucks on “Fear Itself,” and he waxes poetic about his hometown over the Beatminerz’ twangy “Peace Connecticut.” Even West Coast vet Xzibit re-emerges to join Ap on “The Recipe.” When his role models aren’t offering new material, they’re resurfacing through samples: iconic lyrics from acts like Outkast, Pharcyde and EPMD are looped or quoted throughout the album, further reminders of where the album’s creator keeps his standards.

When Apathy isn’t reveling at the opportunity to rock alongside his idols, he’s doing his best to make timeless records of his own by utilizing his arsenal of multisyllabic rhymes, relatable topics and grimy soundbeds. Many of the songs are simple showcases of his verbal acrobatics, but he handles concepts just as well. His self-produced efforts are especially strong: the eerie “1:52AM” narrates a grim, two-sided tale of a woman terrified of her jealous ex-boyfriend, and “The Villian” flips the perception of good vs. evil. The Statik Selektah-laced “It’s Just Hip-Hop” encourages fans to keep their love reasonable (“it’s cool if you say your favorite rapper’s Apathy/but don’t be getting all overzealous and faggoty [sic],” he insists), while “I Dedicate This To You” thanks a longtime wifey for loyalty without losing Ap’s edge. Posse cut obligations are fulfilled with “Army of the Godz,” which sees Ap teaming with over half a dozen other emcees from his crew to obliterate a venomous beat by Teddy Roxpin.

Listeners hoping for Apathy to reinvent the wheel with Honkey Kong may be disappointed, but the disc is a great reminder of the rap that he and many of his fans grew up listening to. By translating the reverence toward his idols into his own talents instead of living in the past, Apathy continues to earn his keep in a genre that he feels is losing its way.