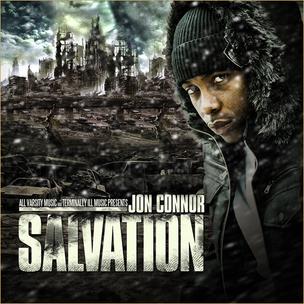 In the intro to his official debut album Salvation, Jon Connor spits, “Don’t write it off as just rhyming and music/I’m trying to inspire minds.” Good thing, because throughout much of 2011, he has definitely conveyed his ability to flat out spit—the Flint, Mich. native has heated blogs and radio shows with dozens of freestyles, collaborations with the likes of XV and Saigon, and even a video cosign from Nas. Despite a come-up that harkens the good ole days in NYC’s battle and cipher circuits, some music fans have wondered about his ability to inspire minds like he asserted in the intro, through substantial songwriting. With Salvation, Jon Connor shows that he’s definitely on the right track.

Jon Connor is named after the messianic figure that will lead humans to defeat an army of robots, but much of Salvation sees him acting more like Arnold Schwarzenegger’s character—obliterating beats with an arsenal of a vicious flow, witty lines, and hungry charisma. Songs like the “F.L.I. 69”

showcase Connor in his most comfortable element: handling his business by dismantling competition with blistering bars. “Someday,”

one of the album’s highlights, contextualizes his confidence by showing how it has enabled his ascension to success.

Connor does show narrative and conceptual capabilities, but aside from a couple exceptions, the topical matter doesn’t stand out enough to leave a stamp. He still makes enjoyable songs, though. “Broken Mirror”

uses emotive storytelling to speak against the power of judgment and misconception. Songs such as “Mind Games” and “Hustle Music” also succeed with their respectively kick off bandwagon jumpers and motivate the disenfranchised. Elsewhere, Connor’s nuggets of knowledge are still substantial, but they’re so snugly lodged between punchlines and boasts that they’re tough to digest for all they’re worth. “We All In” and “Minutes & Seconds” exemplify this, as Connor tosses candid details about his violent hometown down hallways of enjoyable, but unfocused bars and stereotypical accounts of friends-turned-leeches. The production on Salvation is also one of its lower points—while most of the beats ably back Connor’s vocals, not many of them stand out. Fortunately, the flaws are small enough to not hurt the album’s 13-song album length.

Even on songs that aren’t as consistent as its highlights, Salvation undeniably showcases a sincerity and hunger that are tough to find in much of Hip Hop today. If Jon Connor continues to build on the skill set he already has, living up to his fictional namesake shouldn’t be so far off.