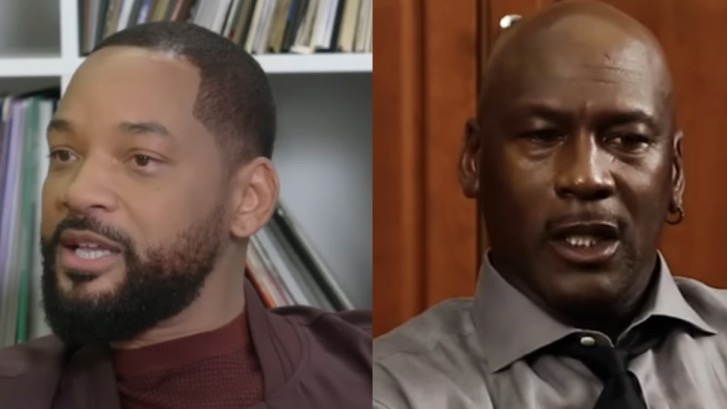 Will Smith has recalled begging NBA legend Michael Jordan for some new sneakers during his time on The Fresh Prince of Bel-Air.

On the latest episode of the All The Smoke podcast with former NBA players Matt Barnes and Steven Jackson, the West Philly native revealed he would always ask the Hall of Famer to lace him up with the newest pair of Air Jordan sneakers before anyone else got their hands on them.

According to Smith, he had no idea what he was doing for the culture when putting on the fly outfits he would rock, he just wanted to be fresh and the most stylish.

“I was living the culture,” Smith said. “I was literally calling Jordan like ‘Mike, please, please don’t give it to nobody. Just let me be the first person, I gotta be the first person to wear it’. And he was like ‘Man, I don’t run that.’”

Smith also revealed he didn’t know that Air Jordan and Nike released multiple “Fresh Prince” editions of Air Jordan 5s. The first pair dropped in 2013, with others released in 2018 and 2020.

The Air Jordan 5 became the sneaker most associated with the show, as the “Metallic” and “Grape” colorways were the most popular. However, Smith’s collection stretched out way beyond the Air Jordan 5.

The sneakerhead community reveres Smith’s run of kicks on The Fresh Prince of Bel-Air thanks to iconic pairs such as the Nike Air Quantum Force, Air Trainer SC and more. But the Air Jordans he wore on the show made it one of the best collections seen in a sitcom, with the Columbia 11s and Infrared 6s among some of the most worn.

Will Smith has been slowly making his way back into the spotlight following his infamous smack incident involving Chris Rock at the 2022 Academy Awards back in March. He was a guest on The Daily Show with Trevor Noah last month to promote his new Emancipation movie, where he tearfully reflected on that fateful night.

“That was a horrific night, as you can imagine,” he said. “There’s many nuances and complexities to it, but at the end of the day, I just — I lost it, you know? I guess what I would say, you just never know what somebody’s going through.

“In the audience right now, you’re sitting next to strangers. Somebody’s mother died last week, somebody’s child is sick, somebody just lost their job, somebody just found out their spouse cheated. There’s all these things and they’re strangers, and you just don’t know what’s going on with people.”

Will Smith Explains How Floyd Mayweather Supported Him Post-Oscars Slap

Smith went on to explain that he wasn’t excusing himself for slapping Chris Rock and described the impact his fateful actions had on him.

“I was going through something that night, you know?” he said. “Not that that justifies my behavior at all. I would just say, you’re asking what did I learn – it’s that we just gotta be nice to each other, man.

“It’s hard. And I guess the thing that was most painful for me is, I took my heart and I made it hard for other people. It’s like, I understood the idea that hurt people hurt people.”