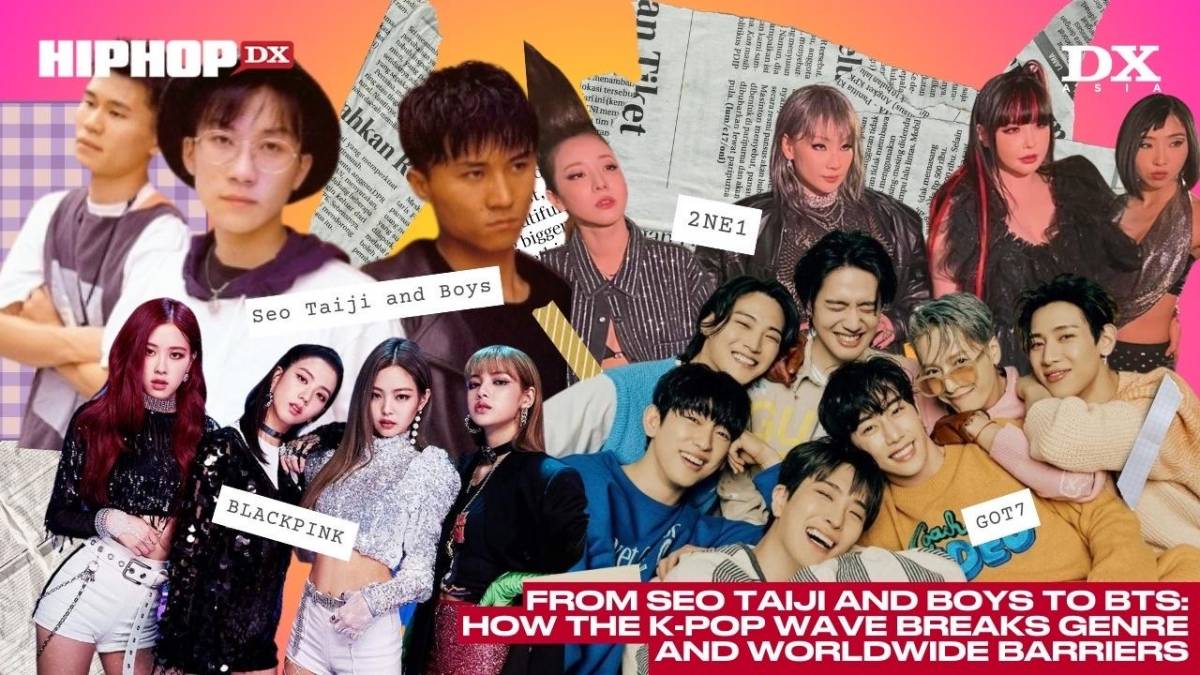 From Seo Taiji and Boys To BTS: How The K-pop Wave Breaks Genre And Worldwide Barriers

With the global phenomenal success of the K-pop influence, South Korea has been eager—and highly incentivized—to promote its popular culture. The term hallyu, which translates to ‘Korean Wave,’ was coined to describe the rapid spread of Korean culture ranging from its music, dramas, and films, down to its styles and trends.

This investment in a creative economy that is focused on generating profits from innovation and creativity quickly generated waves of recognition for Korean artistry that transcended international borders.

Modern K-pop, or Korean popular music, can be traced back to the 1990s, when Seo Taiji and Boys—dubbed as the first K-pop group, as well as a pioneering Korean rap group—“Nan Arayo” (난 알아요, “I Know”), which topped the charts in 1992, blending Korean pop with Western contemporary music, specifically rap and new jack swing.

Breaking the norm of ballads at the time, members Seo Taiji, Yang Hyun-suk, and Lee Juno’s reintroduction of hip hop with urban music styles and lyrics that challenge social pressures paved the way for a success that was replicated by the industry in the years to come.

Soon after, entertainment agencies were established to recruit fresh talent and generate the hype for “idols” (a term synonymous with popular music acts) who were creatively styled and trained to perform catchy pop and hip hop songs. Their memorable performances and undeniable charisma contributed to the K-pop boom that eventually went global.

Apart from their exceptional vocals and dance performances, what distinguished K-pop on the worldwide stage is its fluidity and innovation in terms of sound and concepts. K-pop groups released various genre-bending music that revolve around hybrids of bubblegum pop, jazzy melodies, heavy hip hop influences, and electronic dance tunes.

K-pop, as we know it now, takes forms from several genres and combines them into its own unique style. Some of the most popular groups such as BLACKPINK, BTS, and EXO typically mix pop and dance with rap verses. With an emphasis on its individuality and roots, the songs are mostly sung in the Korean language, with occasional English words and phrases, typically in the hook or chorus.

What is even more noteworthy is that these themes are not just there for the sake of visuals. Embedded in them are symbols and metaphors depending on the narrative flow of the album and each group’s overall concept.

The digital wave and fandom

One of the most iconic hits in K-pop was the viral “Gangnam Style” in 2012 by South Korean rapper Psy. This record-breaking success quickly became the first video viewed more than 1 billion times on YouTube, as well as the most-liked video at the time according to the Guinness World Records.

Although both the song and the video were so far from the idol image fronted today, they were bizarre enough to launch Korean music into the digital world. Since then, K-pop has been fearless in establishing its digital identity. It commercialized its innovation by utilizing online platforms and developing new styles with emerging technology. For instance, when electronic music entered mainstream productions, K-pop capitalized on it by blending it with hip hop and translating the vibe into electrifying visuals.

Online websites were also leveraged to make K-pop music extremely accessible internationally. This worldwide streaming which drove sales up was further boosted by aggressive marketing and promotions that established relationships with their audiences.

K-pop groups grew when their fandoms also grew. It became an industry standard to continuously establish connections with fans through in-person interactions and engagements such as fan meets (fan meetings), fan signs, and concerts, as well as communication via social media and fan service apps such as VLive, Lysn, and Bubble.

Fandoms were also given names with meanings that show their affection of the idols to them. For instance, SEVENTEEN’s fandom is called ‘Carats’ because they enable the group to shine. GOT7 calls their fans ‘iGOT7’ because 7 is a lucky number. The term means that the group and their fans are lucky to have one another.

In addition to this, fans also market and produce K-pop through their fan-made products, fan sites, and gatherings such as anniversary screenings and cup sleeve events. Some of the more dedicated fan bases also donate to charities under their idols’ names and conduct mass voting for their idols to be recognized with awards.

Despite the clean images and perfect examples set by K-pop idols, some of the artists are beginning to produce more music that tackles and explores important issues which are typically stigmatized. BTS, for instance, sang about social pressures and criticized the education system (see “Lost” and “N.O.”).

K-pop was marketed as a product made by Korea, and not a culturally watered-down commodity made to appeal to international tastes. Culture was its capital and its solid identity was its strength. With a growing acceptance in the international scene, K-pop shows no signs of slowing down its phenomenal success anytime soon.