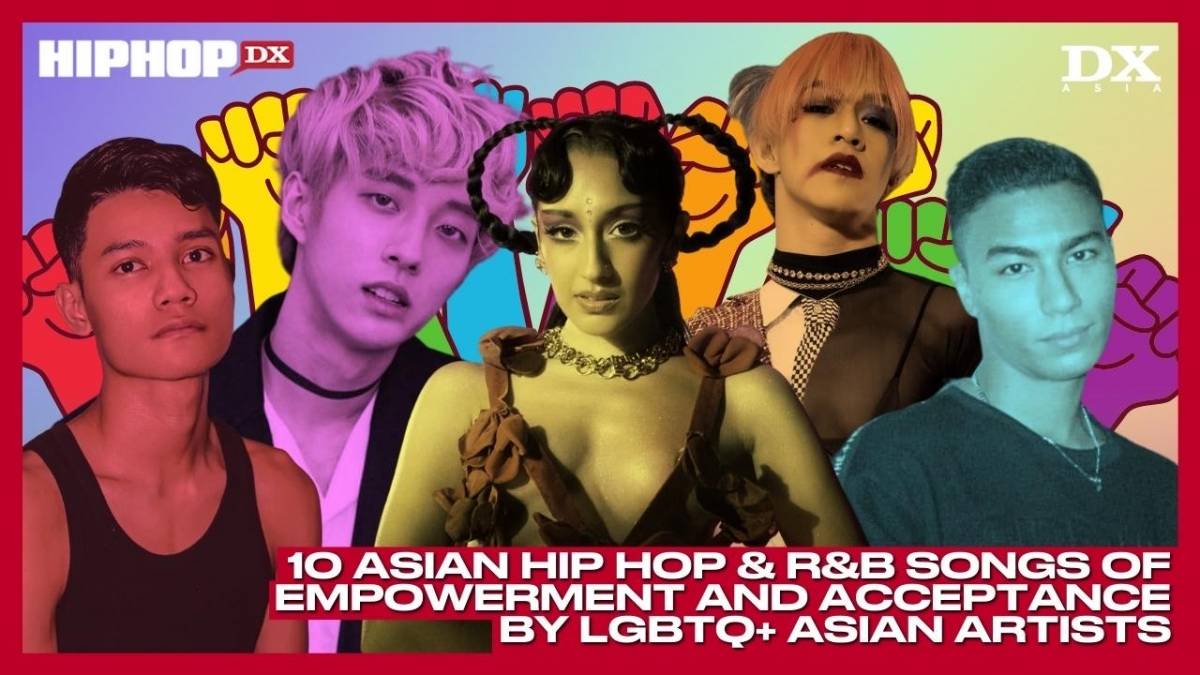 Any celebration is not complete without some tunes to accompany it. With Pride Month being celebrated this June, here are some songs by Asian and Pan-Asian artists who uplift and narrate the experiences of the LGBTQ+ community through their music.

The artists featured proudly identify as a member of the LGBTQ+ community and have produced innovative music that rallies for representation, especially in still male-dominated spaces such as hip hop and the music industry at large.

In no particular order, here are 10 hip hop and R&B songs to add to your playlist to celebrate pride month.

Editor’s note: For artists who have not publicly shared their preferred pronouns, we’re using they/them/their.

Holland’s fourth single, Nar_C, was released in 2019 with a music video that starts out brightly by showing intimacy between two queer lovers. The video spirals into darker tones as the lovers fight and eventually go their separate ways.

According to Holland, “Nar_C” is coined from the word ‘narcissism’ and the song is intended to emphasize the importance of loving yourself before loving anyone else. Holland is the first publicly gay idol who is making waves in the conservative South Korean industry with music that incorporates themes of self-love and acceptance.

Last month, he shared that he was “hit on the face twice” and called a “dirty gay” by a stranger while walking around in Itaewon. He wrote, “This is obviously a hate crime. The fact that my sexuality as gay is public should never expose myself to this kind of violence,” he wrote. “Nor any other LGBT+ and all elders, women, and minorities in this world. This happening in 2022 shows the sad reality of LGBT+ human rights.” He continued, “This should never happen to anybody in this world, no matter who you are. I wish our world is filled with more love and hope rather than hate and violence.”

“As I am” is from KLARK’s debut album 88, which features eight songs about the experience of being an openly gay Chinese-American. The song is about asking for acceptance after coming out to their family.

The R&B-inflected track features dreamy mellow vocals and lyrics such as “Weather man said storm is gonna come / When I need shelter, will this be my home?” The 22-year-old artist hopes to write more music about their story in order to inspire more people who might be going through the same experiences.

He said in an interview, “Hopefully seeing an Asian-American making art and putting himself out there openly inspires others in my communities to also create their own art, challenge preconceptions, and make their voices heard.”

SUGXR BVBBLE debuted in 2021 as the first Thai rapper who is openly a member of the LGBTQ+ community. Their debut song, “Bong,” is about self-love and directly addressing haters and doubters.

The music video featured colorful visuals that paralleled the dynamic quality of the song’s rhythm and message. The song screams empowerment with lyrics like “I’m not the king, not the queen, I’m the god / Now look at me, ‘cuz I’ll be free.”

Earlier this month, Thailand ratified a bill that pushes for legalizing same-sex unions. If approved by the Parliament and passed into law, Thailand will become the first Southeast Asian country to legalize same-sex unions.

Bloomberg noted that while the bill doesn’t endorse same-sex marriage, it will “enable couples to adopt children, jointly manage assets and liabilities and have inheritance and heritage rights between partners — which are not part of current laws.”

Filipino-Nepali singer-songwriter Jason Dhakal teamed up with frequent collaborator, and producer LUSTBASS, in “Body & Soul” off the former’s 2020 lovesound EP.

The neo-soul track features piano-laden production and lyrics that radiate sensuality. This is accompanied by a Valentine’s Day-themed visual (which Dhakal dedicated to “the girls n gays”) depicting unfiltered, human emotions as the artist shares intimate moments with both a man and a woman—showing that there’s more than one (i.e. heteronormative) way to express love and romance.

Emotional and physical connections bring this track to life in the dominantly conservative Filipino media. The artist, who is an openly queer Filipino singer, hopes to continuously produce music that not only legitimizes and brings visibility to different kinds of love but also has spoken out against LGBTQ+ discrimination in the past.

Queer artist alextbh champions the LGBTQ+ community in conservative Malaysia through their 2020 EP, The Chase. The title track features a music video that gives off old alternative cinema vibes, as well as scenes depicting queer hookups paralleled with shots of nature.

The song was written to describe the emptiness felt in the artist’s experience with casual relationships. It is also a reflection on the artist’s realization of the non-existence of a love that is ‘perfect’. In an interview, alextbh said that the music video portrays “the moments after a casual hookup” and that the EP broadly covers what “a lot of queer people go through this persistent detachment in relationships.”

“Sad Femme Club” is a powerful song by queer Filipino-Canadian artist Kimmortal about the struggle of women against an oppressive masculine system that prevents them from being who they are.

The song, released in 2019, features strong lyrics such as “‘Cause you’re never not fighting a racist system that keeps powers in place / And that fails to acknowledge the root of your pain” and “I was taught not to trust my / Own mind and decisions, my body is my body / I won’t give them an apology (No).”

The song and video are described as a “story [that] follows a distressed femme who meets the Sad Femme Club, a power crew that fights evil.” (Editors’ Note: A “community music video” was also released, which showcases a touching, powerful moment of intersectional feminism and display of allyship.)

No less than American legislator Alexandra Ocasio-Cortez approves the song in an Instagram video reshared by Kimmortal. She wrote, “when @aoc feels the rage behind sad femme club singggg ittttt! this is for all you bad ass feminists existing rn! You are enough!!!”

In an album—2019’s critically acclaimed LUCID—that’s already packed with odes to identity and tender, self-affirmation, Raveena’s soft vocals in the album standout “Stronger” contrast the loudness of her cry for the recognition of women’s strength.

Beginning with lyrics such as “Holy as the sunrise / Clear as the water / I was so naive / To think a man could be stronger than me,” the song comforts women who have been undermined, broken, and devalued for their femininity.

Accompanied by a serenely choreographed music video, the song intends to reclaim women’s power through the recognition of their worth.

This coming-out song was released in 2019 by Tuimi in support of other queer Asian women who feel that they are not accepted.

The title “menina” is a Portuguese word for “woman” and could also be used in the context of romance. The description for the music video states that “Nobody deserves to see a mask. This is my way of telling you to be true to yourself, love who you want, stop hiding, and be proud of who you are.”

Being multilingual herself, the Vietnamese-German artist hopes to use languages to bridge global differences. The song features a vibrant music video and seductive elements that exhumes confidence in their identity and artistry.

“Butterfly” is one of the songs by queer Japanese-African American artist UMI that centers on identity, of finding oneself and wanting to be free from all troubles and sins, and according to the song description, “about wanting to make people proud but not knowing what you’re doing with your life.”

Released as part of their 2018 debut album, Forest in the City, “Butterfly” showcases UMI’s soulful vocals layered on lo-fi beats, As with UMI’s other songs, it promotes an environment of peace, healing, and self-discovery.

Singaporean rapper The G3sha came out in 2019 with the song “I’m OK” which details their journey of self-discovery. The rapper acknowledges his internalized homophobia (trigger warning: the song includes homophobic slurs) and explores a conservative society’s expectations of normalcy.

It also tapped into their experience of self-harm and suicide attempts due to their repressed identity, which shows a different kind of contending with one’s identity that’s different from other expressions of self-acceptance and embrace of queerness, especially in a slowly progressive intersection of hip hop and Asian cultures.

With the anthem of the song being “G-A-Y-B-O-Y- OKAY,” it emphasizes that being yourself is okay, regardless of what other people might think.