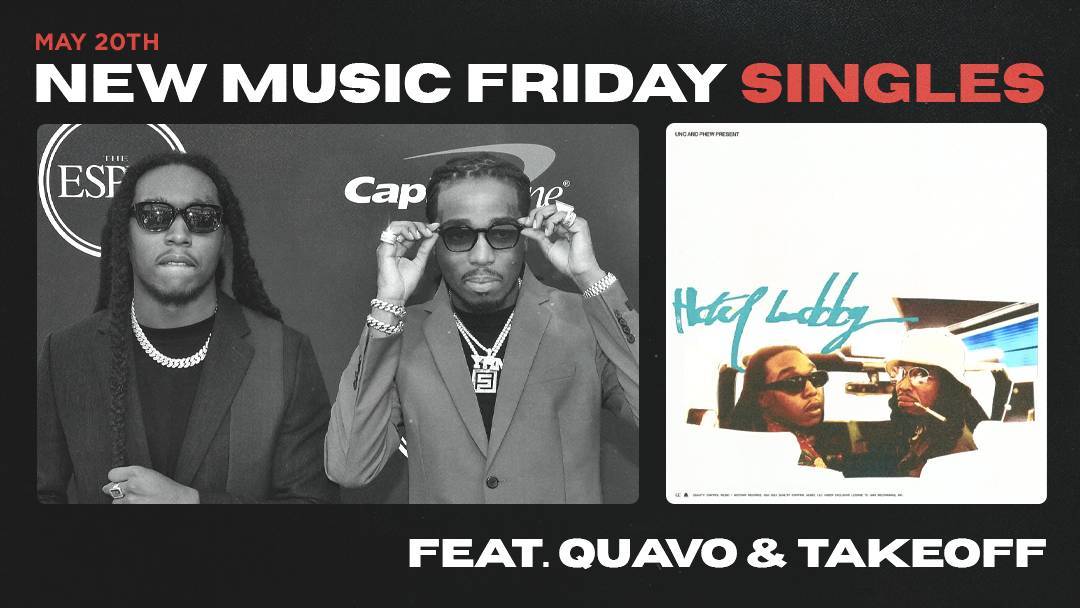 HipHopDX – Several big names have staged their return to the limelight in this week’s edition of HipHopDX’s New Music Friday Singles coverage.

There are also new offerings from artists such as Moneybagg Yo and Kodak Black, 42 Dugg and Arabian, TiaCorine and more.

Peep the full list of singles that were released on Friday (May 20), below.

Both Quavo and Takeoff have started off 2022 with a burst of momentum via their anthemic singles “Shooters In My Crib” and “Crypto” respectively.

Now the pair of Quality Control rap stars seek to keep pace by joining forces for their Fear And Loathing-themed “Hotel Lobby” collaboration.

Memphis rapper Moneybagg Yo manifested arguably his most successful year thus far in 2021 off the strength of his Billboard chart-topping album A Gangsta’s Pain.

With the help of Kodak Black, the CMG and N-Less Entertainment signee gives his fans a glimpse of the “Rocky Road” he traveled in order to secure a bag and his spot at the top.

Even though he’s currently facing five years in prison, 42 Dugg appears to still be all smiles and focused on returning to the lavish lifestyle he and Lil Baby rapped about on their “We Paid” hit.

Affirming his belief he’ll be back home “Soon” the Detroit MC connects with Arabian for his latest vibe.

After a four-year hiatus, Chicago lyricist Lupe Fiasco snapped out of his Hip Hop hibernation and announced his return on May 18 by releasing the cover art and release date for his eighth LP, Drill Music In Zion.

Ahead of the release of the LP in June, Lupe shares his savvy “Autoboto” single.

While the Atlanta rap community is still reeling from the untimely death of Young Thug’s YSL protégé Lil Keed, Lil Gnar is rejoicing in the memory of his comrade in music and life.

Utilizing the legacy of the Trapped On Cleveland 3 rapper, Lil Gnar and Yak Gotti turn up on the Die Bout It track “No Reason,” which includes a posthumous verse from Keed.

Cash Money artist Jacquees is on a roll following his connection with CyHi for their heavy “Tears” collaboration.

Adding to the success of his Future-assisted “Not Jus Anybody” single, which recently became the number one most added record at urban radio, Jacquees shares his latest offering entitled “Say Yeah.”

TiaCorine is quickly rising in the ranks of the rap game due to her poignant versatility and edgy aura.

SOSSHOUSE signee Jelly is gearing up to deliver his Pi’erre Bourne-produced album with the help of a Memphis Hip Hop legend.

In anticipation of his upcoming project, The Wolf of Peachtree 2, Jelly recruits Juicy J for support on his “Bubble Gum” banger.

R&B singer Leon Thomas isn’t holding back now that he has a Grammy Award under his belt and has officially joined Ty Dolla $ign’s EZMNY Records.

Taking full advantage of the moment he’s manifested for himself, the former TV star secures a standout feature from Griselda MC Benny The Butcher for his “X-Rated” record.

After weeks of an intensive, yet refreshingly creative and personal TikTok-driven social media campaign, West Philly-bred rapper Armani White has returned with the follow-up to his 2021 EP Things We Lost In The Fire.

Utilizing a sample of the Neptunes’ 2002 song “Nothin,” Armani White has crafted the ultimate name-dropping anthem via his “Billie Eilish” single.

Don’t forget to check out this week’s Honorable Mentions nominees, which include artists such as Logic and DJ Premier, Ronny J and Xhulooo, Ari Lennox, Faze Kaysan, Fivio Foreign and Sheck Wes and more. There are also several highlights in this week’s New Music Friday Albums coverage, which includes new releases from Lil Durk, Boldy James, and Lil Gnar, among others.