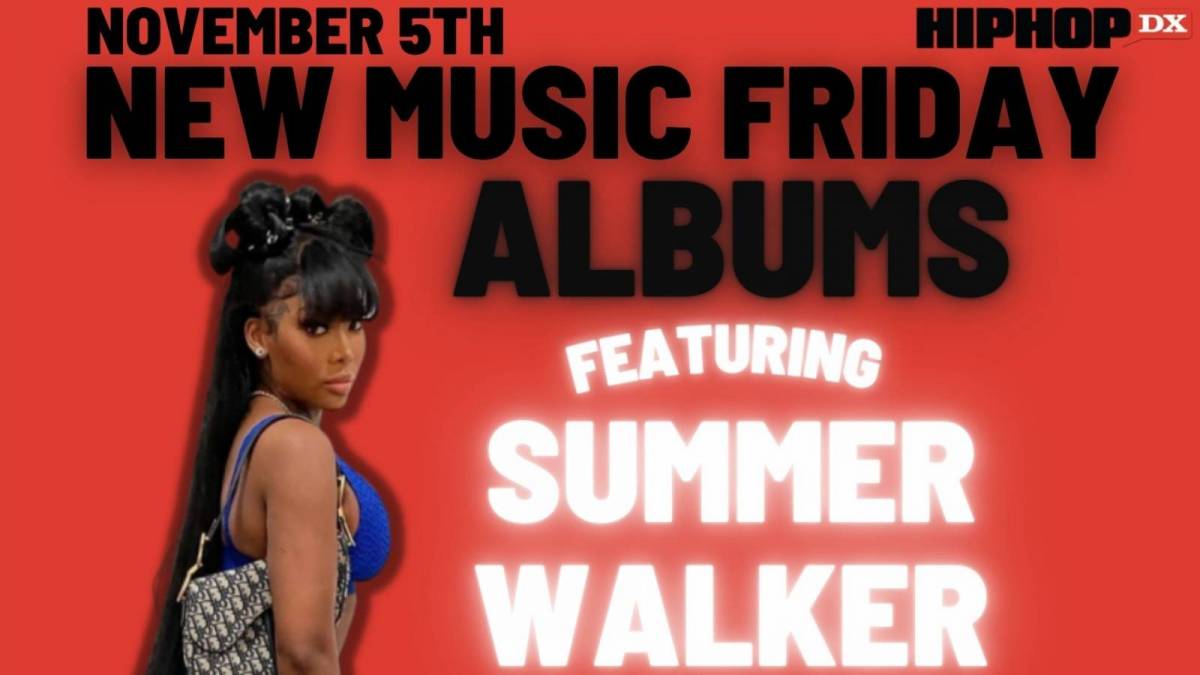 Halloween’s now passed and the winter holiday season is inching closer. The weather’s fully turned and the leaves are changing, too. One thing that will never change is HipHopDX bringing you the best new music of the week each Friday.

On this week’s roundup of the latest albums from Hip Hop and R&B, fans woke up to new albums from artists such as Summer Walker, Key Glock and Aminé.

New projects from Kay Flock, 2 Chainz and Strick also arrived, so keep reading for complete coverage of all the new projects which dropped on the week ending on Friday (November 5), below, and let us know what won the week in the comments.

The Memphis rap movement will not be stifled. The younger cousin of Southern rap titan Young Dolph, Key Glock has become a worthy MC of his own over the past few years, notching successful projects in 2018’s Glockoma, last year’s Yellow Tape and now its follow-up Yellow Tape 2.

Spanning twenty tracks, Glock flexes his waltzing Southern drawl across booming production. Days before the release of Yellow Tape 2, Glock teased that the only feature would be himself. With his latest project, he’s proved that’s enough.

Summer Walker – Still Over It

Summer Walker first took the world by storm with her 2019 album Over It. Two years later, the Atlanta songstress is still not feeling it, dropping Still Over It. Led by the rambunctious single “Ex For A Reason” featuring City Girls’ JT, Still Over It is the return to prominence for one of R&B’s leading ladies.

Still Over It does arrive with some drama in the news, though, as Rolling Stone reportedly obtained Summer Walker’s contract with record label and management agency LVRN, which allegedly states that Ms. Walker’s deal is remarkable sub-par for an artist of her stature. Nevertheless, Still Over It is a must-listen from one of the genre’s most captivating singers.

Just a year after releasing his most critically acclaimed body of work to date in Limbo the Portland, Oregon-based rapper is back with his latest project TWOPOINTFIVE. Trailing three years behind its first volume ONEPOINTFIVE which held hits such as “REEL IT IN,” “BLACKJACK” and the Gunna-assisted “HICCUP,” the “Caroline” rapper’s latest exudes the same lively sounds made popular with his biggest hits.

Not everyone may recognize Terrace Martin’s name, but best believe your favorite rapper looks up to him. The genre-bending musician has toured with Snoop Dogg, worked with Kendrick Lamar, released music alongside Kamasi Washington, Robert Glasper and 9th Wonder under the moniker Dinner Party and now he’s come forward with DRONES, a masterclass in properly executed features and instrumentation.

Included on the project are Kendrick Lamar, Thundercat, Ty Dolla $ign, Cordae and many more. With the ability to weld the sounds of R&B, jazz, funk, soul and Hip Hop into his own distinct sound, Martin’s DRONES is a peak offering from a musical titan.

The smooth and emotive sounds of Baltimore singer serpentwithfeet first blessed fans’ ears in 2018 with soil, but it was DEACON from earlier this year which launched him to new heights. Back already with a brand new EP in the form of DEACON’S Grove, serpentwithfeet continues to captivate listeners with his intoxicating harmonies and playful cadence.

serpentwithfeet has never shied away from stripping away layers of varnish to reveal intimacies of his life with his fans, and DEACON’S Grove is no different, as the young artist winds through themes including love, queerness and identity.

Kay Flock made a strong case for New York’s Song of the Year with “Not In The Mood” featuring Fivio Foreign and Lil Tjay, released this past October. The Drill rapper has been bubbling just beneath the surface of Hip Hop’s mainstream, gaining traction with tracks such as “Being Honest” and “Brotherly Love,” gaining nearly three million monthly Spotify listeners in the process.

The D.O.A. Tape marks Flock’s debut album and his first foray into New York’s larger musical scene. If Kay Flock isn’t yet on your radar, there’s no better time to change that.

Young Stoner Life’s had an excellent fourth quarter in 2021. Last month the Atlanta-based label imprint came forward with Punk, Young Thug’s highly anticipated follow-up to his 2019 album So Much Fun. The rest of the team is now coming forward with new music, led by Strick’s Strick Land.

From North Carolina, Strick—who also made appearances on Punk and both volumes of YSL’s Slime Language—first dropped the Swae Lee-assisted “Play Stupid” ahead of the release of Strick Land, a deep groove which finds the “Pour A Pint” rapper setting aside the distractions to focus on the bag in front of him.

RPS N PLAN BS II is now here, boasting nineteen songs across a 45-minute runtime. From the bounce of “BESIDE ME” to the soft chimes of the MadeinTYO-featuring “LIKE DIS,” RPS N PLAN BS II is a must-listen album from two of rap’s rising stars.