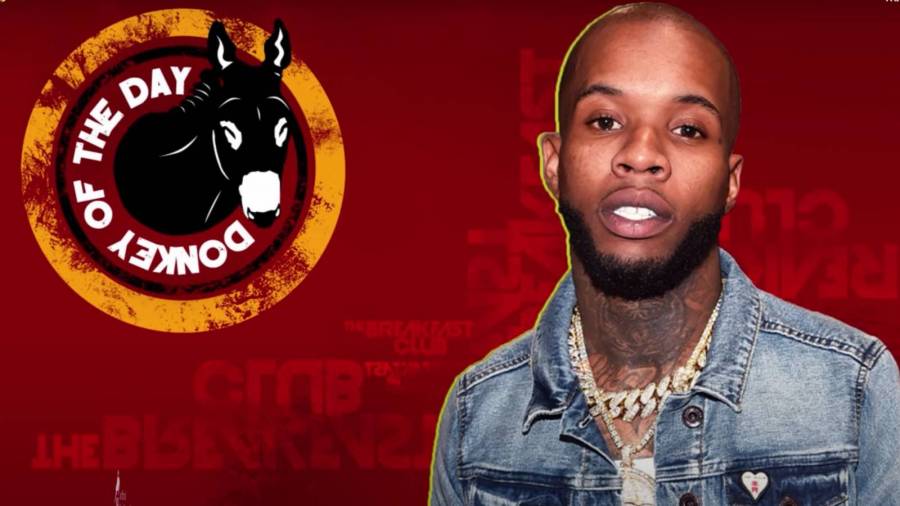 Unsurprisingly, Charlamagne Tha God has declared Tory Lanez “Donkey of the Day” less than 24 hours after Megan Thee Stallion identified him as the triggerman in last month’s shooting incident.

During Friday’s (August 21) episode of The Breakfast Club, the outspoken co-host bequeathed the 5’2 rapper with the honor, explaining, “Number one, you’re getting Donkey of the Day because you shot a woman. I mean, some Donkey of the Days just sell themselves, that’s number one. That sounds so insane to say Tory Lanez shot Megan Thee Stallion.

“Number two, this woman Megan Thee Stallion didn’t want to say anything. She was tryna save you and you allegedly had people calling blogs trying to make it look like you were the victim? Like saying things like she hit you first? My brother, there is nothing you or your people could anyone just justify why you are the alleged shooter of Megan Thee Stallion.”

Charlamagne continued his commentary by expressing just how confused he was by the entire incident.

“I truly don’t understand n*ggas like I used to,” he said. “I can understand in my mind why a man who has a career, who has things going for him, who is actually a celebrity would shoot a woman who is arguably the hottest rapper in the game right now. I don’t understand violence against women period, especially this LEVEL of violence but Tory Lanez, you a whole star out here.

“Like, why? Why did your brain take you there? Was it cocaine or some other type of drug? Were you extremely drunk? You have an extreme anger management issues? Like what emotional trauma are you dealing with that you can’t control your emotions so much that you were driven to shoot her? Is your ego that fragile?”

From there, the veteran media personality plays a clip of Megan explaining what exactly happened inside the car. As she tells it, there were three other people in car with her — Lanez, her friend and a security guard. An argument broke out and she’d had enough, so she attempted to exit the vehicle. That’s when she says Lanez started firing at her from the backseat of the car as she tried to walked away.

Charlamagne added, “Ladies, don’t save these guys. They don’t want to be saved. Nobody can save anyone.”