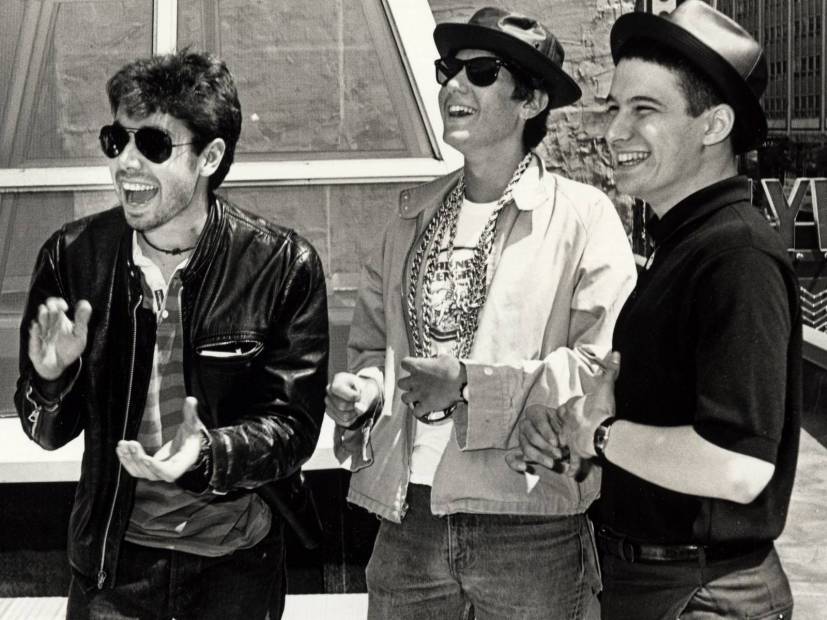 Following the 2012 death of Adam “MCA” Yauch, the two other Beastie Boys, Adam “Ad-Rock” Horovitz and Michael “Mike D” Diamond, understandably retreated from the spotlight. The Beastie Boys as they knew it were over.

The motley New York City trio had coasted the wave of Licensed To Ill superstardom, subsequent Paul’s Boutique flop and Check Your Head resurgence only to lose their longtime best friend and bandmate to cancer 10 years later, an unceremonious and crippling end to one of Hip Hop’s biggest success stories.

But in 2018, Ad-Rock and Mike D would breathe life into their colorful story once again by penning the 590-page Beastie Boys Book, allowing fans to get a deep, introspective look at what made Beastie Boys tick. Suddenly, they were thrust back into the spotlight, doing interviews, panels and appearances at festivals such as SXSW. But they wanted to know how they could take it further.

That’s where Spike Jonze came in — the skateboard culture hero, mastermind behind Beastie Boys’ 1994 “Sabotage” video and celebrated film director. His relationship with the Beastie Boys goes back decades, and he was the right person to bring the book to film. However, they couldn’t simply make a documentary, no. In the spirit of Yauch, it had to be different — something no one had ever done before.

“It evolved over time,” Mike D said during a recent roundtable with HipHopDX. “First off, when Adam and I were first spending a lot of time working on the book, I read a couple of music books and it seemed like they had a similar formula of, ‘I was walking down the street, one day I met this kid, this happened and everything was great and then we hate each other and fuck those guys.’

“That was pretty much every book, I’m telling you [laughs]. With the book, we didn’t want to do something like anybody else had done. As with Yauch, as a band, what we’ve always done is to try to do something different. Then when it came down to having the show, at first it was like, ‘Are we going to go do readings for our book at bookstores?’ That again is kind of a normal thing. We were talking to Spike about it, and we were like, ‘OK, let’s put together a show that works in two hours and has a little bit of a story arc.'”

The result is the Beastie Boys Story film, a roughly two-hour deep dive into the history of the group told from the two surviving members who lived it. The doc, which arrives via AppleTV+ on Friday (April 24), is based on the live events they’d done to promote the book. It features Ad-Rock and Mike D standing onstage in front of an audience, raw and vulnerable, as they look back on key moments in their careers.

Ad-Rock pointed out the original show was three to four hours long and Jonze, as the director, was responsible for whittling it down to a digestible length — not an easy task.

“The show that Spike filmed was three or four hours long,” Ad-Rock explains. “It was long. So, things had to be edited out. Even in the original script that me, Mike and Spike wrote, there was some changes. Spike, he’s the filmmaker and he wanted to change things up. I wanted to know what Spike in the end ultimately was like ‘I like it, but it’s gotta go.'”

“As we were writing it and putting it together, we put it together without really having enough time to rehearse it, so the first show we had in Philadelphia was really only our second time we’d run through the whole thing,” Jonze tells DX.“We kinda knew they were going to be a little long and sloppy and messy, and that was gonna be part of the fun live, and then we thought every night we’d do the show different. Adam and Mike are consummate professionals and would give me magic every night.

“Every night was different, knowing we could take the best of and cut it down. There was a lot of stuff that we cut out that was great. We did this opening sequence where Adam tells this story about Yauch pulling this prank on him that took 15 years. It was a great example of Yauch’s dedication to an idea that he set the prank up 15 years earlier.”

Before Jonze can finish his thought, Ad-Rock starts ribbing him in true Beasties fashion, putting the trio’s innate chemistry on display with, “I have a question for Spike. Do you think Mike and I are the worst actors you’ve ever worked with or on the list of the worst, talentless actors?”

Jonze replies, “You’re a natural storyteller, Adam. You style lent itself to the storytelling thing we were doing. Mike’s style, his natural style, is more like a boat without an anchor or a plane without wings [laughs].”

Mike D concedes, “It’s little abstract,” to which Jonze replies, “Just when you think Mike’s story should go left, it goes gold-ish purple. Mike’s acting style is its own amorphous gas. It’s like a gaseous form of acting.”

Ad-Rock hops in with, “Just when you think it’s going to go less, it goes more [laughs]. I have a question for Mike. If you could reach through the computer, would you choke me or punch me?”

Mike D throws it right back and answers, “Choking. Punching, I’d feel bad about. Selfishly, it would hurt my own knuckles and hands. Choking is a lot more satisfying. I’d get to see you sweat and gasp.”

It’s these types of playful interactions that pepper the Beastie Boys Story film. Even the most diehard Beastie fans are bound to learn something new. The fallout between Beasties and Def Jam might’ve been documented in the past, but hearing them talk about it is a whole other experience. At one point in the film, Mike says it could’ve been “any three white guys” who Russell Simmons molded into rap deities.

“To clarify, looking back at it when Rick Rubin introduced us to Russell Simmons, Russell saw this thing in us that we didn’t see in ourselves,” Mike D explains. “It was like, ‘These guys love rap music and they’re going to make rap records, and I can take that to an audience and then I’m going to get them on the covers of magazines and places.’ At the time, it was a struggle for Russell in terms of rap being this very underground, alternative culture that he was trying to bust into the mainstream.

“I think he saw us as an important part of the program. The point is — it could have been us, it could have been a couple other dudes. We were going to make our shit. Rick’s mission was also separate. He just wanted to make great records. At the time, it was rap records and that evolved into other kinds of records. There were these different agendas happening.”

Ad-Rock interjects, “To clarify, also — we were terrible. Like, we were really bad. We were just starting out. It’s not like he found this undiscovered gem — like these guys that could really rap or really play guitar. We were really, really bad.” Mike D adds, “It took us a minute to figure it out.”

Jonze notes, “They’re talking about the time when they’re just starting to rap and that video where they’re reading the raps off a piece of paper. After they made their first record, they started finding their voice and becoming distinctive. That’s the point they’re talking about. When they were 16 or 17 and doing Run-DMC rhymes in their bedrooms.”

To their credit, when they returned in 1988 with Paul’s Boutique, long after the Licensed To Ill hysteria had faded, they’d found their groove. Sure, maybe the project wasn’t commercially viable when it was released, but it evolved into one of their most revered albums.

One of the more honest revelations in the film comes when they’re discussing their unintentional frat bro anthem “Fight For Your Right.” In the process of mocking bro culture, they themselves became the drunken, out of control meatheads they’d once despised.

“In writing ‘Fight For Your Right,’ we were in my apartment in the West Village in New York City,” Mike D says. “We don’t have any bro dudes in our social circle, so it seemed like a really funny thing to make fun of. We didn’t have this vision of, ‘We’re gonna make it big.’ It was more like, ‘Oh this is awesome. We get to make our record, fuck around and do what we wanna do.’ Why not? We’ll do this song that’s kind of a goof, making fun of these bro-y guys that we don’t even know.”

Mike D continues, “Then we go on tour, and those dudes are in the front row. You kind of go with it for a little bit. You’re getting applause for doing this thing and after a bit, you’re like, ‘Whoa, wait a second, the world where we came from in New York City was so not that world — and we missed it. We missed who we were in that world.

“I don’t know — I think we got fortunate in this sense that because of the falling out with Def Jam, it brought it back to being about the three of us. We got to sort of really take a break and look at each other, the three of us, and be like, ‘OK, what do we want to do?'”

Ad-Rock chooses to use a potato chip analogy to illustrate how the endless nights of debauchery simply grew stale.

At the end of the day, Ad-Rock and Mike D never anticipated becoming become the global phenomenons that are the Beastie Boys — but they did.

“We come from a punk rock background and no one we knew, or none of the bands we knew, it wasn’t a thing of ‘we’re going to make it one day.’ It was like day-to-day, is it going to be fun? This is the fun thing we’re doing today.’ So, it was wild when people started buying our first records and we started playing bigger shows. It wasn’t part of our plan, but it was fucking cool.”

Millions of albums sold, countless tours around the world and enough clout to impress their own Hip Hop heroes solidified their place in music history books. If anything, the Beastie Boys Story film spotlights their authentic selves — two New York City punk rock, Hip Hop-loving kids who not only nurtured their friendships during the bumpy ride to fame but came out of it as better people.