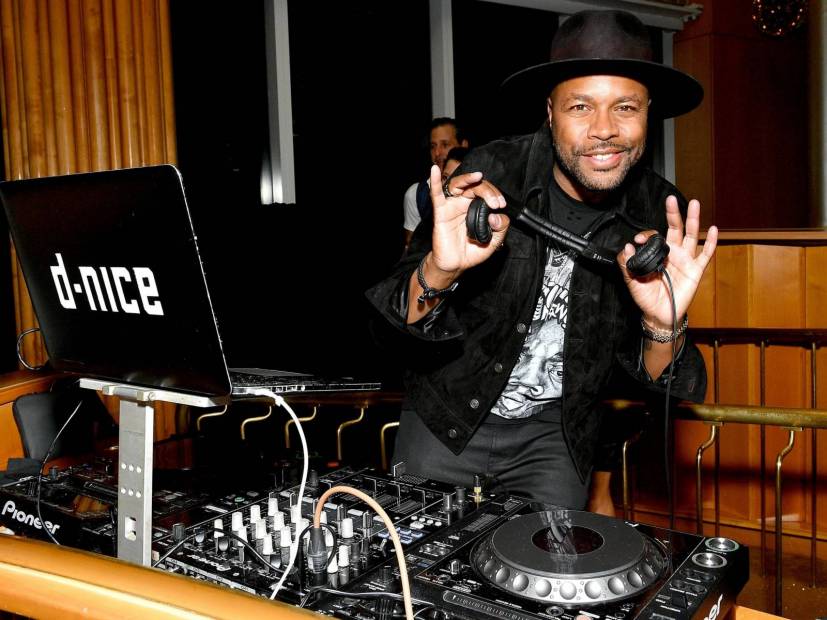 A growing number of artists are using Instagram Live to connect with their fans and peers as the coronavirus pandemic continues its global rampage.

DJ Premier also got things popping on Saturday night (March 21), which also happened to be his 54th birthday. Lord Finesse, Alchemist, Apathy and the aforementioned Def Jam Recordings co-founder were all tuned in as the legendary producer played cuts from the Beastie Boys, Gang Starr and more.

That’s just the tip of the iceberg. Here are some Instagram accounts to watch as the weeks of self-quarantine roll on.

The neo-soul goddess announced her “Quarantine Concert Series: Apocalypse One- Live,” which she describes as an “interactive, intimate experience from my bedroom.” Keep an eye on her account as she continues to provide updates.

You ready? 📽by eb ———Check my last post with the beetle.

The Biz is currently cutting it up on the 1s and 2s and shows no signs of slowing down. From Michael Jackson to The Sugarhill Gang, the veteran Hip Hop artist is as entertaining as ever.

The Roots drummer went live on Sunday night (March 22) and it’s likely only a matter of time before he returns to spin some more funk, soul, Hip Hop and, of course, Prince.

9th Wonder is another seasoned turntablist who’s been going live for his fans over the past couple of days. But he’s also supporting his peers and joining their sessions as well.

Not only has the D.I.T.C. vet been popping up in Instagram Live sessions with D-Nice and DJ Premier, he’s hosting his own.

Spent time with friends & fans this afternoon at the Meet & Greet in Paris who wasn’t able to catch me yesterday because the show at La Marbrerie was cancelled.

As previously mentioned, Preemo’s Instagram Live sessions are a Hip Hop haven for any purist. He’s been quite active on the platform since the coronavirus madness began.

THANKS TO ALL THE BORN DAY SHOUT OUTS WHICH IS MARCH 21 YESTERDAY AND THE LATE ONES TODAY (LOL)… I APPRECIATE ALL OF ‘EM… I’M GONNA STAY FOCUSED ON DOIN BETTER 1 DAY AT A TIME WITH MY GOALS… YOU SHOULD TOO! ONE LOVE PEOPLES! 54 & COUNTING… [BANANA CAKE BY @vivalacollins

Of course, D-Nice will go down in history for his epic Instagram Live party on Saturday (March 22). The list of famous names who joined the session was staggering. In addition to the ones previously mentioned, Will Smith, De La Soul, Black Thought, Bun B, 2 Live Crew’s Uncle Luke, Queen Latifah, Preemo and Ms. Badu also tuned in to see what D-Nice was throwing down.

The Jurassic 5 turntablist is working on something special. He’s expected to go live by Thursday (March 26), so any Ozomatli, J5 or underground Los Angeles Hip Hop fans need to keep an eye on his account.

Unapologetically me is let out the cage when we all get put in our cages. Funny how that works. Midnight PST join me for candlelight music for the sheltered. @brujasybrunchenvivo

Cut Chemist’s fellow J5 member DJ Nu-Mark is another entertaining Instagram Live account to visit. He will be on by Thursday (March 26) to showcase his unbelievable skills on the turntables.

I’ve self quarantined and decided to take my “Crate Expectations” Volume 2 Drum Pack for a test drive! Make use of your time in the lab and download these drums from my series into your beats! These are the drums from my drum pack series available @thedrumbroker or just click on the link in my bio friends 🥁☝🏽 . . . . #Beats #CrateExpectations #Studio #MusicStudio #HomeStudio #producergrind #Makingabeat #Makingbeats #artist #Boom #MusicProduction #StudioFlow #beatmaker #Beatmaking #Beatstars #ProducerLife #TrapBeats #ProducerLifestyle #Producer #BoomBap #MusicProducer #producerpush #Producers #beats #beatmakers #music #Producing

The Compton’s Most Wanted OG plans to hit Instagram Live on Tuesday (March 24) to discuss his new double album Official. Tune in at 8 p.m. PST.

Eiht’s fellow Compton’s Most Wanted MC Tha Chill has also been getting funky on Instagram Live. From classics such as Digital Underground’s “Humpty Dance” to the West Coast gangta rap he’s famous for spitting, Tha Chill knows how to keep things moving.

The longtime radio host/journalist is interviewing artists on his IG Live for a series he calls “Bedroom Bars.” He’s currently speaking with Dee-1 and more interviews are presumably on the way.

TONIGHT, we’re back with #BedroomBars on IG LIVE🔥🔥 Last night we had thousands of rappers from around the world spit live, and we’re doing it again tonight at 7pm EST on my IG LIVE 🙌🏾 Yo @ChrisWebby, @Merkules and @bonesbrigante, y’all hopping on with us? 👀 just added @official.jwalt

Bay Area Hip Hop staple DJ Fresh hopped on Instagram Live to give his fans a little taste of what he’s been working on recently. Surrounded by multiple keyboards and other studio equipment, he delivers some heat. Tune in.