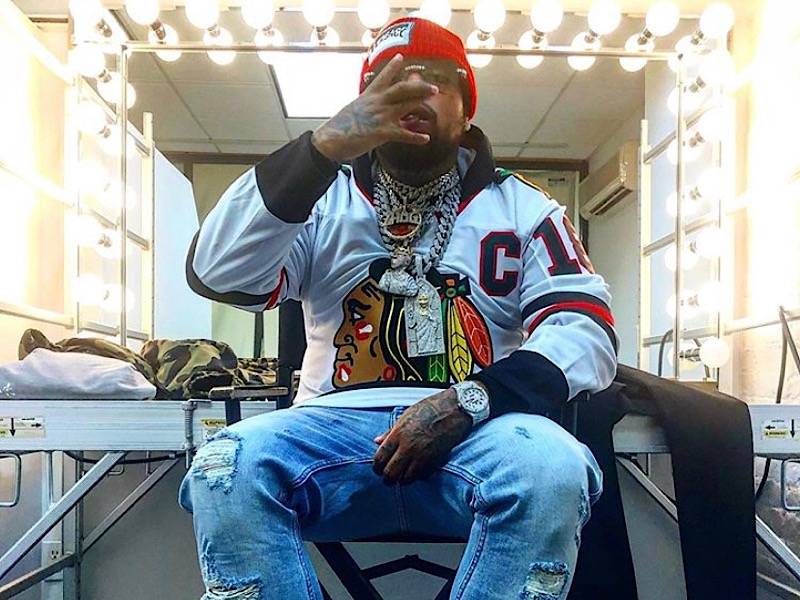 When looking at the career of Griselda mastermind Westside Gunn, his body of work and distinctive merch have made him infamous. However, his business prowess is what he hopes define his legacy at the end of the day. Having begun as the business mind behind Conway The Machine, he became an MC out of necessity after his brother was shot.

The rest, well, is history.

With the success of Griselda reaching a fever pitch, West’s outside ventures seem to be slowly eclipsing the grandeur of his musical output.

”That was one of my reasons for going over there to join the forces with Roc Nation,” West tells HipHopDX. “To build with the builders.” He currently holds the distinction as the only artist in (musical) business with both Eminem and JAY-Z.

“I got some heavy hitters,” he says with a laugh.

One of the most intuitive business moves as of late for Gunn — for any fan who pays attention — is his collaboration with the Brian XL and Amazing Red founded House Of Glory (HOG) Wrestling. A collaboration sparked in tandem with the launch of his wrestling merch brand Fourth Rope, it’s a play that (to mirror West’s own sentiment) was hiding in plain sight.

”Fourth Rope, is the designer of all merch for HOG… I was already over there watching the matches and just building with Brian XL,” he explains. ”We formed a relationship. He could see my loyalty and I just said, ’Man, let’s take this shit to another level.’ I wanted to invest in that shit. We did what we did.”

FLYGOD and the LUCHA BROS. What a Fuckin Night and @reyfenixmx took his mask off and gave it to me out of Respect ???????? this shit still wet #pause @penta_zero_miedo your a LEGEND @hogwrestling #HOUSEOFGLORY #FLYGOD #theNewKingOfNY #Culture #4thrope

WSG adds that he had the vision of bringing Master P (who purchased a majority stake of the company) into the fold. ”I saw him being the Black Vince McMahon. We linked with P, we all sat at the table and shit and we’ve been building ever since.

“Just long as we the best at what we do, the sky’s the limit, man,” he says, pointing to the star power and collective experience and respect within HOG’s management and roster. “You never know what the fuck this can be. This shit could be the biggest shit in the world. I just know it’s about to be crazy.”

The organic nature of the collaboration is important to note, and it’s something Gunn himself says is important — especially considering the biggest strength of his brand, authenticity.

He throws out an example, “Tomorrow I may wake up and design a whole fucking sneaker with adidas and Nike, just like that. You just never know. That’s how I work. I just really live my life and I’m just glad I got a platform to be able to just, you know, show it to the people.”

Though that is just an example — and not a hint meant to send sneakerheads into a frenzy — he does offer some concrete items to start saving toward.

“I’m telling you now, in 2020 I’m going to have some toys out. I don’t know what it’s going to be, but I know that I’m about to start developing them,” he says, with an obvious tone of excitement. ”I’m going to have crazy ass toys in 2020 with crazy ass art prints.”

Building on that second point, he reveals that he’s recently invested in visual artist DNTWATCHTV. “We going to have gallery tours, with his shit. We are going to be selling the original art and prints.”

He points to next year’s ComplexCon, hinting at a booth of art, toys, (maybe) a yet-to-be conceived sneaker and whatever else he thinks of before then.

During a sidebar question about whether he believes Griselda has the most prominent ad-libs in Hip Hop (which they just might) he jokingly said he may consider creating a talkbox toy. That stream of thought led to the suggestion of an app. It was just a glimpse into the fast-paced creative process of Gunn — a person with the means to actually bring these ideas to life.

“I’m in a movie I just did last week,” he quickly adds. “That shit coming out next summer. I’m everywhere, bro. I’m just living, you know … muthafuckas keep watching because it’s never been done.”

Never Had a song on the Radio Never had a song in the club and Never had a video on TV but it don’t look like I was left off of shit ???? #FLYGOD #theNEWKINGofNY #CULTURE #LEGEND #GXFR #BUFFALOKIDS ya fav rapper fav rapper #TRENDSETTER #ICON Hitler Wears Hermès OUT NOW EVERYWHERE #AOTY #WWCD #BlackFriday

Though 2020 is poised to be his last year as an MC, it’s clear that he’s got a lot of other things going on. Though music is something he’ll likely never shake. He remains the executive producer of Griselda’s releases, and with lesser exposed parts of the machine, such as poet Keisha Plum — whose project he says is near completion — set to drop, he’ll always be hands-on in that facet of the business.

Just how many solo projects he has left isn’t clear, but even if he never dropped another, his catalog is one he says will stand immortal.

”You never know. Eight might be the last one,” he says with a laugh, referencing his Hitler Wears Hermès series. “I know one thing: if for any reason I didn’t do another one and I ended it off with this, this was the best series of all time. I could go out right now or just ride this series into the sunset … on the God number, the number seven. Just leave it like that.”

As the conversation draws to a close, Gunn describes what he thinks his legacy will be — when seen in both hindsight and by the next generation.

”This a one of one. You had to be there to see it. I beat all the odds. Do you know what I’m saying? Just, period. There’s not even in the music shit. I had to work extremely hard. Ain’t nobody in Hip Hop ever came from Buffalo — I had to work way harder than all these other fools,” he says humbly.

”I just want to smell my roses though, man. I don’t want to die … I want muthafuckas to talk about it now. This is the thing: we got the power. We’ve got the power to do what the fuck we want to do,” he explains, noting that he just wants his proper respect.

“Just like how the legends get respect, I want that shit. I’m a legend too,” he says. “Don’t wait till later on and say that shit. The legends that we say are legends, I did what they did 20 times already.”

The biggest take away for West though is the impact he’s having on the city that made him the person he is today.

“I gave them hope. I’m showing them shit … going to the schools, talking to the kids, all of that. Because, that’s the future,” he says. “My city ain’t never had this ever. That’s what I love to do.”