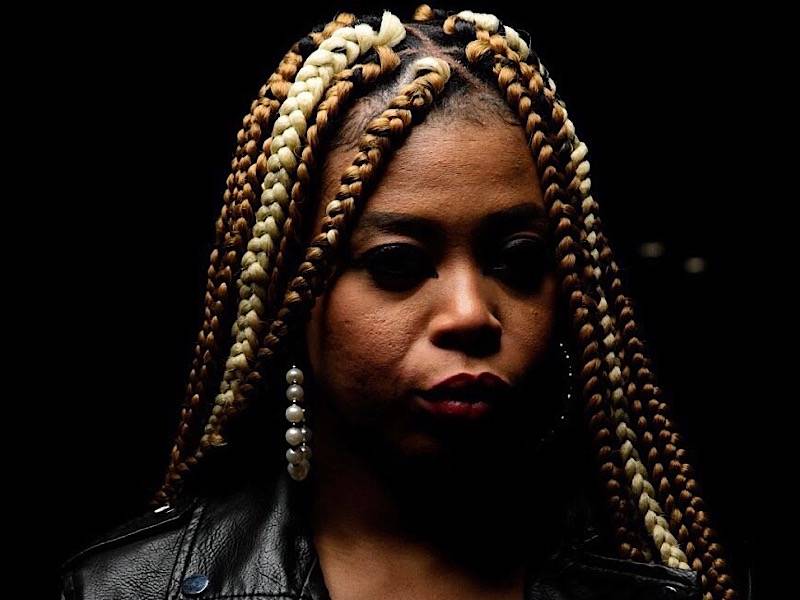 For fans of Griselda, one of the most alluring and simultaneously frustrating aspects was the almost deliberate veil of mystery surrounding them. Until more recently, there was a level of effort that fans both independently and collectively had to put into piecing it all together — especially if they got on the bus at a later stop.

Now with their Shady-backed masterpiece-hopefuls finally about to see the light of day, fans are beginning to get to the iceberg that rests below the surface of the water — for lack of a better allusion. Still, as the world finds itself more comfortably situated with Westside Gunn, Conway The Machine and Benny The Butcher, some related timelines have yet to be explored in more detail.

Poet Keisha Plum is one such artist. For fans, her name is unmistakable, having first appeared on “MkQueens Dead,” which was the first song on the very first edition of Westside Gunn’s Hitler Wears Hermès series. She’s since appeared and all the subsequent installments, as well as various projects from the camp, including Gunn’s seminal classic, Flygod.

With Hitler Wears Hermès 7, having just dropped, on which Keisha closes the series out with a powerful piece set to an Alchemist beat, she tells HipHopDX about her journey, mixed emotions about the project and where she’s going from here.

“We went to school together as kids,” Keisha says of her relationship with Westside Gunn. “West was always the fly nigga you know … gold chains, the latest Jordan’s and all of that.”

They were close like family, as she explains. “I see him like, you know, as a brother of mine.” Though they lost touch as they got older, only to reconnect years later in Atlanta.

“The music part came into it when Conway got shot, you know. This was the first Hitler. I was amazed because I had never heard him rap up until that point,” she says with a laugh. “It was like, ‘Whoa.’ I wasn’t expecting that.”

Gunn was aware of Keisha’s poetry and wanted her on the project. She notes that he actually wrote that initial poem himself — though she made a few tweaks. She wrote all the poems that preceded and has since become a staple of his projects.

“When I heard Hitler Wears Hermès, I was like, ‘Oh, okay, how’s that’s gonna fly,’” she says. “I was hoping people wouldn’t be upset with the Hitler reference, but it all worked out.”

When you are also a fan, and @djpremier is on stage to witness the greatness of @whoisconway @westsidegunn and @getbenny in #NYC for the #HEADLINES debut in front of a #SOLDOUT show .. these moments are once in a lifetime ????⚖️? #theALMIGHTYtour #griseldarecords #GxFR #CULTURE #HIPHOP #TAKEOVER #BUFFALOKIDS #HISTORY #KeishaPlum #poet #villain #goddess

With the saga coming to an end, she points to the symbolism of the last instalment, adding that there is a deeper meaning behind the number seven — a number associated with completion.

“We thought that after number four we were going to be done,” she laughs.

Gunn is the creative captain of the ship, and though Keisha knew she was on the project, it wasn’t until the tracklist was released via Instagram that she learned she was the last track.

“West was like, ’You’re going to be on this, but it’s just you by yourself. I’m not on it with you.’ I really appreciated him for that,” she says. “But when I saw that I was closing it out, my heart dropped.

Keisha is just getting started. With obvious appearances on upcoming projects, notably What Would Chine Gun Do? there is also going to be a focus on building her personal profile.

“I have had private conversations with [West] about the next steps for me as a poet and trying to carve out this niche in the hip hop industry,” she says. “It’s going to be interesting, but I’m up for it.”

“It’s half done,” he notes, adding that it’s slated for 2020. “Executively produced by me, so you know what it’s going to sound like … the whole team is going to be on it, plus special guests.”

On top of her album, she’s writing a book — a combination of short stories, poetry and photos. She also alludes to helping inspire the youth from her hometown of Buffalo.

Specifically, she recognizes a possibly to help teach poetry during a more fully realized Westside Gunn Day program. Following the official proclamation by the Mayor of Buffalo this past summer, the Griselda staff held a very successful charity event that gave out school supplies to children.

Whether it was Westside Gunn’s foresight or not, giving Keisha this platform does inadvertently give her a unique opportunity to shine a spotlight on poetry for an audience that may otherwise sleep on it. It’s a point that isn’t lost on her, and she hopes to capitalize on going forward.

“I started to like poetry at a very young age. Being from the hood that we came from in the inner city, kids need an outlet. I want to be that voice. Young people, young girls and women need those waves.”

Ultimately, as a creative, she expresses her gratitude for the experience, and the ability to have her poetry heard at such a massive level.

“I hope that I can resonate with people,” she says. “I want my writing to be powerful. I want to make an impact.”

You can keep up with Keisha via her Instagram, @KeishaPlum.